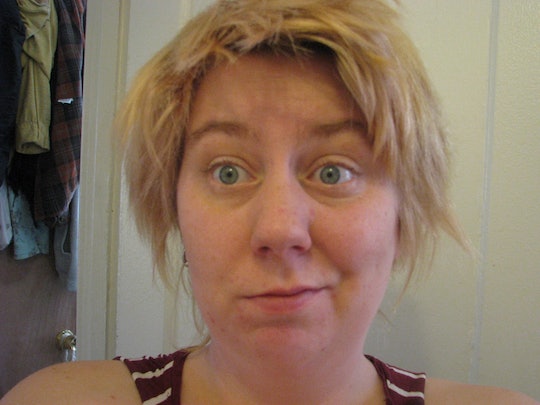 I’ve always been something of a nerd. I’m the type of person who tends to get curious about things, and when I get curious I like to dig right in and do some research. Years and years ago, when I was single and had only one cat to care for (oh, the glory days!), I checked out a textbook on Ancient Greek history from my local university library for fun. My friends and coworkers shook their heads at me, but I was happy as could be. So it’s really no surprise that I brought that same energy and enthusiasm to parenting. Especially in a world where less and less generational parenting wisdom is passed down, it made perfect sense to me to look things up. Amassing a library of baby-care manuals was too much work, and frankly too expensive, so instead I found myself holding my beautiful baby in one arm, and Googling on my phone with the opposite hand. Looking up information about babies was often helpful, but it ultimately, after my baby was born, it got to the point where my pediatrician had to look me in the face and point-blank say, “I think you need to lay off ‘The Google,’” and my pediatrician's advice was one of the most important pieces of parenting advice I've ever heard.

I absolutely love being a mom, but the fact is that being a new mom can be confusing. Babies are weird and wonderful little creatures, and no matter how much you attempt to prepare, they will do something you didn’t expect. I felt like, after my son’s birth, everything I thought I knew about babies had been wiped clean from my mind. It turned out that even after careful research in an attempt to prepare, there were things I just didn’t think of until faced with them. Gaps in my baby-knowledge included (but were not limited to): How to give a baby medication, what the heck to do about diaper rash, and when to introduce solid foods. I could ask for advice from friends, family, or my pediatrician, but that often meant waiting to ask the question, and I felt that I wasn’t getting the whole story that way. I needed to know what I needed to know now, and I didn’t have time to wait for answers.

My mother often began her advice with, “well, what the doctor told me when you were little…” and friends were often regurgitating advice from their expert of choice. For a person who craves information, it was frustrating and disheartening. I wanted all the facts! I wanted to know what different schools of thought had to say about a particular issue and I wanted to know why they differed and where those ideas came from. Waiting for years-old feedback didn’t really seem worth it to me, so I did what any smart millennial would do: I took it to good old Google.

If you had asked me at the time, I would have sworn up and down that it wasn’t distracting me from enjoying my time with my son. The truth, though, was that it was.

After my son’s birth my Google search history read like a book about whatever was going on with my kid at the time:

And on and on it went.

My reliance on Google may have started out of necessity and a healthy desire to feel informed, but it quickly became just that: a reliance. At first it felt great to be able to find my own info when I needed it, but that sense of satisfaction made it easy to always feel like I needed to know more. Before long, I was having a hard time making even the simplest parenting decisions (“What time should a six month old go to bed?”) or assessing even the smallest of issues (“seven month old nursing constantly”) without the input of the world’s most popular search engine. I found myself reading about babies, baby care, and various issues babies can develop almost constantly. And if you had asked me at the time, I would have sworn up and down that it wasn’t distracting me from enjoying my time with my son. The truth, though, was that it was.

My wife was clearly distressed by the fact that I was in constant research mode, but she also didn’t really know how to reason with me. I do remember her, somewhat sheepishly, trying to bring it up several times, but I was able to brush her concerns aside. After all, I needed all of this information for our baby. And if she did break through my stubborn exterior, it didn’t last for long, because of course she had questions as a new parent too. An innocent remark like “oh, I guess I don’t know very much about that, have you read anything on it?” was easily motivation to attempt to read everything that had ever been written (or at least everything that was available online for free) on whatever the subject happened to be. She quickly backed off trying to rein me in.

In the midst of my constant flurry of baby related research, we dumped our pediatrician. It was a great decision, and one I stand by to this day, and on a tip from a friend we were able to find a care provider who was a much better fit for our family. I liked her right away because she spoke to us with respect and she listened to our concerns. She viewed breastfeeding not as a horrible chore (like my other doctor had), but as a miracle of the human body. As a dedicated breastfeeding mom, that appealed to me and made me feel safe and comfortable in her presence.

On our second visit with her, the subject of our son’s two brand-new teeth came up. “Are you brushing them?” she asked.

“Well,” I took a gulp of air, “I actually had some questions about that…” and before my poor wife could get a word in edgewise, I launched into a detailed description of what I found when I attempted to look up information about infant tooth brushing. Oral B suggests to start brushing as soon as the new tooth emerges, or maybe even before they emerged, but were they just trying to sell more toothbrushes? Doctor Sears said to brush your child's teeth with gauze wrapped around your own finger, but that just seemed like a good way to get bit to me. I was about to jump into my frustration that I hadn’t been able to find out more, when she held up her hand, and gave me a look that was mildly amused but not unkind.

It felt like she was giving me permission to be a parent who wasn’t always going to be perfectly informed on everything. In a way, a weight had been lifted.

“Just brush his teeth.” she said, and then she shrugged. The shrug made me feel like she had failed to grasp the gravity of the situation. I hadn’t been able to learn all there was to learn — didn’t she see that that was a problem? I started to say something about wondering about techniques and needing to know more.

“Just so long as they get brushed,” she said, and then added, “I think you probably need to lay off ‘The Google.’”

I could have been offended. It could have hurt my pride and made me angry. To be honest, I’m not totally sure why it didn’t. I think on some level I was sick of the constant hunt for information, and beginning to realize the toll my little Google habit was actually taking. Maybe it was because those words were coming from a medical professional that I actually liked, but whatever the reason, I let myself hear her. It didn’t feel like an insult or a threat, it felt like someone finally had the guts to say what everyone was thinking aloud. It felt like she was giving me permission to be a parent who wasn’t always going to be perfectly informed on everything. In a way, a weight had been lifted. It was so tempting to want to know everything and be the perfect new mom, but ultimately it was impossible. I felt my wife, who was standing next to me, let out her breath slowly.

“I’m sorry, I just…” the doctor started to say, clearly concerned that she had hurt my feelings.

“No,” I looked up at the ceiling tiles, “you’re right, I probably do. Thanks for saying so.”

I took those words to heart and I gave myself permission not to know everything there is to know about babies. I let myself follow my own intuition a little bit more, make a few more mistakes, and trust that when the really big stuff happened, I’d be able to find the info I needed.

My wife nodded, and I wondered how long she’d been dying to say the same thing to me, afraid I’d bite her head off.

It might have been humbling, but it was also a great gift. It gave me the freedom to parent with more spontaneity and more joy than I had before. It also made me realize that while sure, knowing things could be helpful, it also didn’t fix problems in and of itself. And knowing everything about everything was completely impossible anyways. So I took those words to heart and I gave myself permission not to know everything there is to know about babies. I let myself follow my own intuition a little bit more, make a few more mistakes, and trust that when the really big stuff happened, I’d be able to find the info I needed. It was like a breath of fresh air, and I slowly learned that I was capable of making parenting decisions just because it made sense for us rather than based on a late night of frantic search engine research. That was the kind of parent I had wanted to be in the first place, and my pediatrician’s words woke me up to that.

Of course, I still Google sometimes, though.