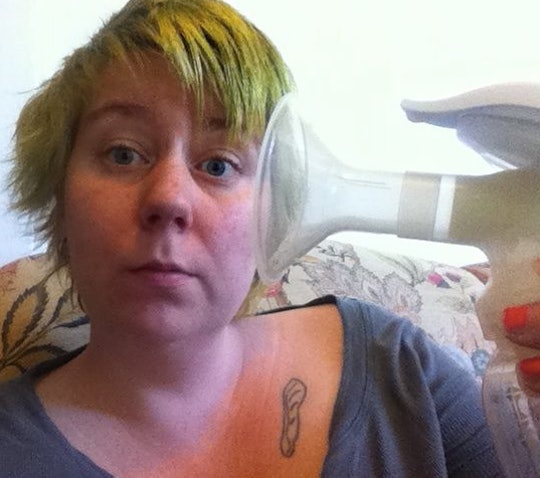 The One Major Reason Why I Dumped My Pediatrician

When my wife and I first met our kid’s doctor, I was so nervous. We’re gay, and in the state where we live there is no protection for families like mine from discrimination. We’re also working class, and lower income parents tend to be judged very harshly be many people, including medical providers. What if our doctor was homophobic? What if she sent us away? What if she assumed we were crappy parents because we were broke? All of these thoughts were whirring and whizzing through my brain. But none of those things turned out to be a problem at all. She was friendly and happy to meet us, and she had a gay daughter close to my age, and hoped to one day have grandchildren. It wasn’t all sunshine and unicorns, though. Despite her acceptance, problems surfaced almost immediately, and then they got worse. And the biggest issue — the one reason we dumped our pediatrician and eventually decided we had to find a different doctor — had everything to do with her terrible breastfeeding advice.

Most pediatricians are pro-breastfeeding, and she certainly seemed to be. I quickly learned though, that there is a lot more to providing support to a nursing parent than believing that “breast is best.” The first indication that something was amiss came during that very first appointment. At first, everything seemed fine. I kind of liked her general demeanor, mainly because she talked fast and reminded me a little bit of my own mom. We were discussing a pediatrician my kid had briefly seen in the hospital, who was hellbent on getting me to supplement breastfeeding with formula, which was just something I didn't want to do. She didn’t think there was any reason for that, so long as the baby was nursing often and seemed to be otherwise thriving. “He looks healthy,” she said, “if it becomes a problem, we’ll talk, but I don’t think you have to worry about it.” I heaved a huge sigh of relief, this lady was in my corner. And then, almost as an afterthought, the weirdness began.

Her back was turned to me as she checked something on her computer screen when she asked, “Oh, and, how long is he nursing at each feeding?”

Since coming home from the hospital, I’d stopped timing him, and was trying my best to be in the moment rather than watching the clock. We'd settled into breastfeeding on demand, and it was working for us. I figured that she, like several of the lactation consultants I had seen, just wanted to make sure that he was getting a full meal. “Well I’m not exactly sure… usually maybe, 20 minutes on each side, sometimes even 30, but I don’t really time it.”“Thirty minutes?!?!?” She sounded, for all the world, like she was personally offended. Which, frankly, seemed really weird and a little unprofessional, in my opinion. Why was this doctor getting so worked up about what I was doing with my own body? “No, listen,” she continued, “What you do is, you do 10 minutes maximum on each side, every time, and that’s it. OK?” I was more than a little taken aback by her insistence, but she continued,

The thing is, the baby is getting all of the milk really in the first five minutes of the feeding. After that he’s just using you as a pacifier.

At every appointment, after examining the baby, she’d ask about breastfeeding. And, much like a broken record, she asked about the length of time my son was spending at the breast. Then she would start her lecture. Again. And again. And again.

I tried to explain that I could often visibly see milk coming out long after five minutes had passed, and sometimes well after 10. There were times when I also suffered from engorgement, but her comment totally threw me off. I tried further to explain that, since we’d had a relatively rocky start to breastfeeding, I was really just trying to nurse as much as possible. She literally just shrugged. I ended up dropping the subject because I certainly didn’t want to have an argument, but I felt really uncomfortable about the whole encounter. My wife could sense my tension, and when we got home, I called our excellent midwife.

She reaffirmed that I wasn’t doing anything wrong, and explained that what I was hearing was outdated advice. I looked it up, and the American Academy of Pediatricians does not, at this time, recommend that nursing parents put a cap on how long their infants feed. After getting off the phone and doing my own research I resolved to simply stand my ground, because it seemed like there were enough good things about this pediatrician not to let this one bit of bad advice ruin that.

But it simply did not end. At every appointment, after examining the baby, she’d ask about breastfeeding. And, much like a broken record, she asked about the length of time my son was spending at the breast. Then she would start her lecture. Again. And again. And again. She never had any reason why nursing for more than 10 minutes was a problem for my kid, and the closest she gave me to a reason why it might pose a problem at all was to ask, “well, are your nipples sore?”

They weren’t. But she didn’t believe me. My kid’s doctor assumed that I was lying to her about my own nipples. Talking about breastfeeding with her felt like banging my head against a wall… a very bossy wall… that was weirdly fixated on my nipples.

After four months of it, I could no longer deal with being shamed for feeding my baby at every checkup. I dreaded the hassle of finding a new doctor, but we had no other choice.

The more that we continued to see her, the more it became clear what (or who) the problem was. All of her infant feeding advice was out of date. Specifically, it was all straight out of the ‘80s, when she herself had been parenting babies, and it was all filtered through her own experiences as a mom, rather than professional expertise. When I said that I didn’t mind my son’s frequent and lengthy feedings, she just stared at me like I was from another planet. I felt like she was projecting her own feelings (and her own experiences parenting in the ‘80s) on me, my family, and my child. As he grew, she continued to be unsupportive, continued to assert that he was feeding too much, tried to push rice cereal on us (which is also no longer an official recommendation), and just became pretty generally difficult to deal with.

The last straw came when my son was four months old. He had started to sleep through the night at six weeks, but at four months he went through a major sleep regression. We had also just moved into a noisy punk house, and I felt like the poor kid was really going through something and needed all the support I could offer him. I didn’t ask for her advice, but I should have known I didn’t have to. She instructed me to immediately cease all night feedings and institute a strict cry-it-out bedtime regimen. When I posited that even if he was physiologically capable of going 12 hours without feeding, it was still possible that he was sometimes hungry in the night, she gave me a dirty look.

“Oh.” I said coldly, “I’m not actually worried that he’ll die, I’m just not sure it’s the best for him.”

“He will be fine.” she said sternly.

And then, if you can believe it, she went on to ask how long he was spending at the breast, and yes, she inquired about the state of my nipples. Again. I told her they still weren’t sore.

It’s absolutely fine that some people don’t get any joy out of breastfeeding, and those people get to choose whatever infant feeding method is best for them. Looking back on it now, she wasn’t a good fit for my family for all sorts of reasons. But ultimately, it was her out of date — and out of touch — advice about breastfeeding that sealed the deal. After four months of it, I could no longer deal with being shamed for feeding my baby at every checkup. I dreaded the hassle of finding a new doctor, but we had no other choice. Our first visit with the kid’s new pediatrician? Oh, that was when she told us about a breastfeeding conference she'd recently attended. And that’s when I knew we had made the right choice.