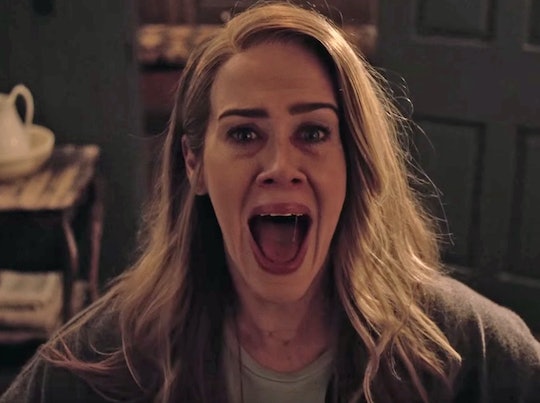 The Most Outrageous 'AHS: Roanoke' Theories On Reddit That May Actually Be True

We're almost on that elusive Episode 6 mark of Season 6 of American Horror Story, when it has been reported that things are supposed to change drastically. Wednesday night's is Episode 5, where things are obviously going to go down with Matt, Shelby, and the ghostly colonists. But with Episode 6 coming up, it's probably a good idea to review all of the most outrageous theories about American Horror Story on Reddit that have been thought up and upvoted enough to give them some merit, no matter how crazy they might seem.

Ryan Murphy told Entertainment Weekly that once we get to Episode 6, things are going to drastically change and that: "The show has a huge turn and the thing that you think you’re watching is not what you’re watching. It’s a hat on a hat on a hat on a hat that we’ve had to protect.” This could mean literally any number of things at this point, but as a result, there are already tons of theories on Reddit from fans who think they've figured out what the next major twist could be. Or, at least a component of the next twist they give us.

Matt, Shelby, And Lee Are Covering Up Something Huge

Redditor ATequilaMockingbird posted an AHS Season 6 theory that involves something a little less supernatural and in part, more true crime in this instance. The theory states that Matt, Shelby, and Lee are actually telling a huge monster of a lie to cover up the real ways that Mason and Cricket died and why Flora turned up missing.

Mason did show up to the house looking for Flora, but when he pushed Lee, Matt stepped in to defend her and accidentally killed Mason. Flora, seeing all of this, ran out and they still haven't found her. Cricket did contact The Butcher, which is when he spoke to Mason's ghost, who told him who'd killed him. When he confronts Shelby and Matt, they kill him too. The tree of them are telling this elaborate story as a way to over up for their murders.

But the big twist, according to the theory, is that when Episode 6 airs, the camera crew is going to take them back to the farmhouse to try and get a confession from them, which is when the real supernatural stuff will start to go down.

Matt And Shelby Are Working With Scathach (Lady Gaga) Now

In this theory, for whatever reason, Matt and Shelby are now working with Scathach, who might have them under her spell of sorts. Redditor kyleb120 posted that they were meant to leave the farmhouse to tell their story and that for Episode 6, they're going to return with the film crew.

But instead of going there for the sole purpose of filming more of the haunting show within AHS, Matt and Shelby are bringing them to be sacrificed for Scathach. They may have made a pact with Scathach to save themselves, or in order to ensure the safety of Flora. Lee might not have left the farmhouse without her daughter, but she could have also been compelled to believe something else, or be completely unaware of the deal Shelby and Matt made with the woodland witch.

Literally Everyone Is Acting

Redditor ckstarling posted their theory that everyone involved in My Roanoke Nightmare are actors. That means the "real" Matt, Shelby, and Lee, and the people we see portraying them in the "reenactment." According to the theory, production told the reenactment actors to go along with whatever happens to them, never breaking character, while the "real" Matt, Shelby, and Lee that we see are also actors meant to make the story more believable.

According to the theory, once once the big climax happens, we'll see that the whole story behind their show within AHS was made up. The reason for which is still unclear in the theory, but it goes on to say that maybe the producers of My Roanoke Nightmare have some hidden agenda with the lost colonists or some tie to them that we aren't yet aware of.

We've already been promised to see a link to Dandy Mott from AHS: Freak Show as a part of Season 6. Now, unless there is some time traveling involved, it's likely not going to be Dandy himself, but according to Redditor funky-al, the creators of My Roanoke Nightmare might be relatives of the Mott family we saw in Season 3 of AHS.

In AHS: Freak Show, we only heard a little bit about Dandy's family from his mother. She did mentioned inbreeding in their past in order to keep everything in the family, like family estates and money, and also told Dandy at one point that he had the same sickness as his father. This is obviously that he was a psychopath, but maybe the creators of My Roanoke Nightmare share this same "sickness," which will be revealed when they step out from behind the camera to visit the haunted farmhouse themselves.

The Feral Boys Are Scathach's Sons

Those feral boys we saw sucking at the teet of a dead pig couldn't have been just for the shock value, right? On Reddit, Supreme000 posted that if Cricket was right in stating that Scathach's womanly urges are stronger during the blood moon, does that mean she wants Matt so badly because he can impregnate her?

And if that's the case, then what of the feral boys we saw, who can only say one word: Croatoan? They obviously grew up in the wild and were as dirty as Scathach herself. They were also able to leave the land, so they aren't spirits like almost everyone else, which means that they're human. If they're the kids of the hillbillies, they'd still be more civilized than we saw, so Scathach being their mother and wanting to be impregnated to have more children makes sense.

As much as we've been searching for every little clue, we still haven't seen Evan Peters yet this season, despite his name being in the credits for every episode. There have been theories that he's the voice behind the camera of My Roanoke Nightmare, but if he isn't, Redditor Im_Dorothy_Harris came up with a theory to account for his absence so far.

We've all seen Scathach trick Matt into having sex with her on more than one occasion, but then that means that he probably isn't the first man she's done this to. This theory suggests that Peters will play the child she had with one of the other men she assaulted in the woods, and he'll be revealed in Episode 6 in a big way. This past Summer, it was reported that Peters dyed his hair red, so could that have been to play Scathach's son, with a likeness of her?

Piggybacking on the Evan Peters train, yungxhrist commented on Reddit that instead of playing the lovechild of the witch and some random man, Peters will play a distant relative of Dandy Mott. It's already been confirmed that we'll see someone or something linked to the Mott family from American Horror Story: Freak Show, but to what extent?

Peters has proven that he can play both good and bad in each season of AHS, though, so playing the descendant of a deranged murderer isn't something that would be particularly difficult for the AHS alum. The wild theories about AHS: Roanoke aren't hard to come by, but the truth is, none of them are really all that far-fetched when it comes to what can happen next. Murphy said it himself that we literally have no idea what we're watching, so come Episode 6, all bets are off.