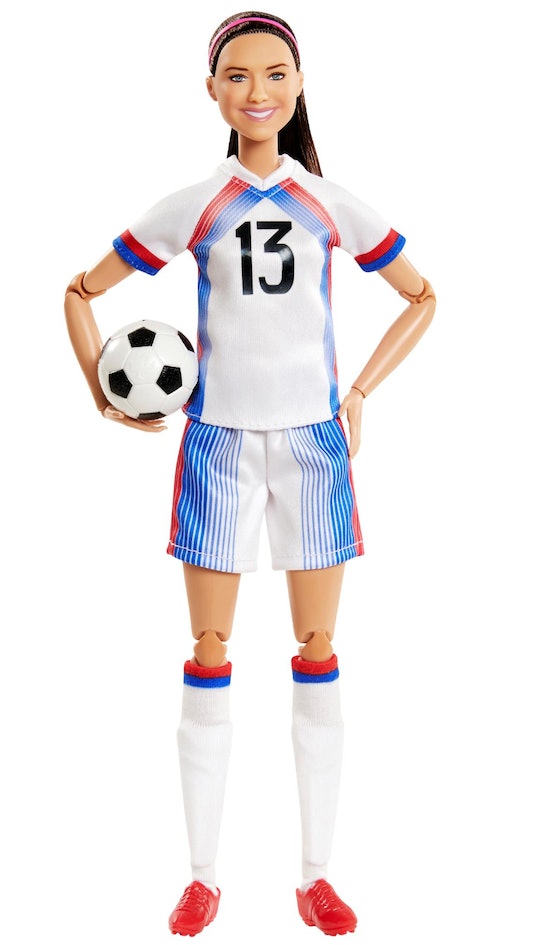 If your kid practices their ESPY acceptance speech in the mirror and can't stop for a dinner break before they make the perfect shot in your backyard goal, they are going to absolutely flip for the new Alex Morgan Barbie Doll. The soccer star is the latest athlete to join the collection of inspirational women in the brand's Role Models series, helping young soccer fans everywhere take aim at their dreams.

A co-captain of the U.S. National team, Morgan's grit, determination, and graceful athleticism are just a few of the traits that children everywhere can embody while they play with this new Barbie doll. The fully-posable doll features Morgan's signature pink headband paired with red cleats and a patriotic red, white, and blue uniform inspired by those she has actually worn on the field. The look-alike doll comes complete with a miniature soccer ball, and even has Morgan's name printed on the back of her jersey.

No matter what your child is interested in, playing with a Barbie can be such an imaginative experience. They can use the dolls to act out their biggest dreams with their own two hands, and never before has there been so much variety in the Barbie brand. From a Barbie campaign set featuring a Black woman as a presidential candidate to their Barbie Fashionistas 2020 line, which includes dolls with prosthetic limbs and one completely without hair, Barbie is now more inclusive and empowering than ever.

Playing with an Olympic gymnast Barbie while watching the 1996 games in Atlanta is one of my fondest memories. I dreamed that I was flying high over the vault just like Kerri Strug while I made my Barbie doll replicate her flawless flips. What an incredible world we live in where now, almost a quarter of a century later, Barbie is still churning out dolls made in the likeness of strong, inspirational women sports heroes.

No matter what your child is into, there is a doll in the Role Model series to inspire them. Whether they want to jump head-first from the high dive like diver Wu Minxia, sprint as fast as Dina Asher-Smith, catch a wave like pro surfer Shino Matsuda, or kick it on the field like Morgan, with Barbie, there's no limit to how high their imagination can soar.