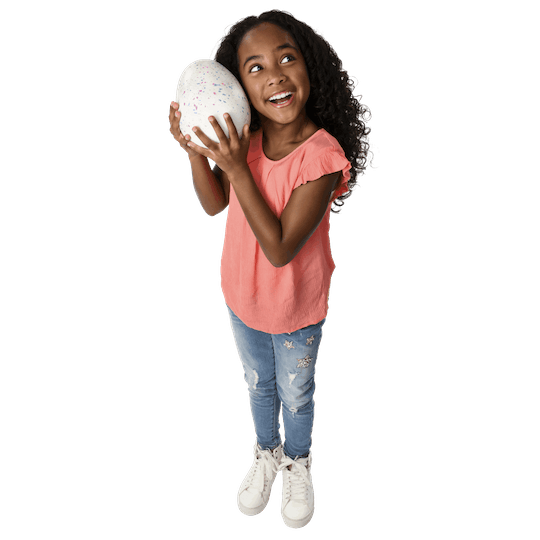 The New HatchiBabies Are Almost Here, & Here’s How To Get Them Before They Sell Out

Once your kid gets hooked on a collectible toy, they absolutely need to get their hands on every new character/color/size the second it hits the shelves. So if you're the parent of a Hatchimals fan, brace yourself: on October 5, the super-popular line is launching an addition that's sure to be at the top of many a holiday list this year: HatchiBabies. Just like with original Hatchimals, kids won't know which HatchiBabies character they have until it hatches from an oversized egg... but HatchiBabies have even more surprises in store.

Obviously this new offering is poised to be a huge hit, for various reasons. It involves babies (and everybody loves baby versions of things they already like, which is something you definitely know if you're old enough to remember Muppet Babies). Then there's the aforementioned surprise thing, which everybody also loves; besides the initial, blind box-esque surprise of which HatchiBabies is in each egg, kids will also find out if their new HatchiBaby is a boy or a girl. (The species of HatchiBabies is being kept a secret until they go on sale.)

Up until now, Hatchimals characters have been gender neutral, as far as I can tell. Honestly, I never thought about it until now, but my search for evidence of specifically male or female Hatchimals turned up nothing. And while my 3-year-old son has a couple of mini Hatchimals, they weren't designated as girls or boys (the fact that they're purple and sparkly would suggest they were girls, I guess, but my son insists otherwise).

Anyway, sex reveals are a major trend these days. But up until now, only expecting moms and dads (and any friends or family members throwing baby showers) could get in on the action. So it only makes sense that this fad would find its way into the toy industry... though one does have to wonder about the potential of very, very disappointed kids who had their hearts set on hatching a baby girl or boy. (On the other hand, I suppose kids who got the boy or girl they were hoping for would be twice as psyched.)

If you're expecting that your kid's excitement level is gonna be on par with the lady in this GIF (and you live in the Los Angeles area), you might be interested to learn that Hatchimals has quite an event planned for Hatchimals Day (October 5) and the launch of HatchiBabies: At The Grove in L.A. from October 5 through October 7, the celebration includes a visit to the pop-up Hatchery Nursery (filled with new HatchiBabies), Hatchimals-inspired activities, interactive photo booths, and appearances from Nickelodeon stars Daniela Perkins and Lilimar Hernandez.

Not on the West Coast? HatchiBabies are available for pre-order from Sept. 17 to Oct. 4 at online retailers across the country (including Target.com, Walmart.com, and Amazon.com), and will officially be on sale in stores on October 5 ($60). Unfortunately you can't get a sneak peak of what the new new fleet HatchiBabies will look like until their October "due date" (the brand is keeping that under wraps), but the anticipation is half the fun. Either way, let's assume that the species will be as cute, cuddly, and furry as the current lineup.

If you don't pre-order your HatchiBabies, I would seriously suggest getting to the store early on October 5, because these things have a tendency to sell out ridiculously fast. After all, you don't want to end up ordering one off eBay for five times the price when the holidays get closer!