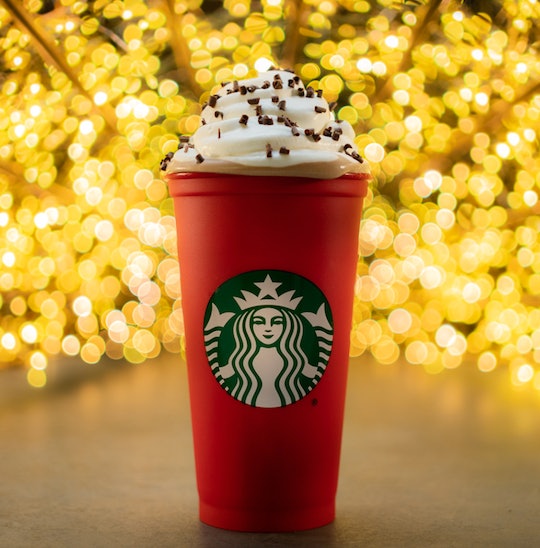 People Are Already Upset About The New Starbucks Holiday Cups, What A Surprise

It's two days post-Halloween, which means that it's a day late to be talking about the holidays. Never fear, Starbucks is ready to kick off the longer-than-ever-but-still-too-short holiday season by releasing their holiday cups for the year. As per usual, people will either go on hateful diatribes about how they're not Christmas-y enough or wax poetic on how the simplicity of the design harkens back to Frank Lloyd Wright or some other designer I surely don't understand. Nevertheless, the new Starbucks holiday cups are here and I am ready for them.

This year, Starbucks announced that for today only (November 2), if you go to Starbucks and order a holiday beverage, you'll receive a free reusable red plastic holiday cup that will entitle you to $.50 off any future purchase made when you bring the cup back for the remainder of the holiday season. The other cup options this year are kitschy cute red and green designs splashed with holly leaves and berries, abstract shapes, stripes, and stars. They're actually rather fetching, if I do say so myself. They're decidedly more decorated than in years past, save for the chiefly red and white striped cup, but certainly, people on the Internet will try and find something offensive about them.

Desperate to get my own hands on one of the reusable cups, I headed up the block to my local Starbucks. These guys know me on sight and were astonished that I was ordering something other than my usual. That's because the gingerbread latté is back and I will have one every day until the New Year: One grande skim gingerbread with extra foam, salted foam salt and nutmeg. (Don't knock it until you try it.) I swear, the salt is better than the whipped cream by a mile and it has way fewer calories.

I tell you reader, I did not get a red plastic cup. I didn't even get a holiday cup, but I'm not mad about it. However, I seem to be in the minority. Twitter is rampant with a combination of people cheesed off that they did not get their promised free cup and smuggy smugfaces who did. I will not be deterred. Do you know how many Starbucks there are in Brooklyn? If the stores were people, you could populate a small town in Iowa. There are that many. Which means that when I'm done writing for the day, I will just go spend another $6 on yet another latté, from a different location, because I want my stinking cup, and if I have to go into debt and caffeine shock to get it, I darned well will. It's a real first world problem, if you ask me.

I am going to go to the drive-through Starbucks, which is always the least crowded location in a city where few people have cars. And then I will be the smuggy smug face. And $12 poorer.

These cups haven't been out for very long, so there hasn't yet been a lot of blowback about their designs. However, if you'll recall, it was just a few years ago that the red cups provoked a strange backlash about their lack of Christmas-specific imagery. Maybe this year's holly design will appease them. I doubt it, though. The whole thing was too weird for words. I'm not sure if they were expecting a Starbucks mermaid to show up at a manger scene or what, but personally, I'm all for inclusivity on my overpriced beverages. Let us all enjoy the spicy goodness that is a gingerbread latté without worrying if it accurately depicts our personal religious preferences. Besides, the beverage is a little bit of heaven on earth itself, so while Starbucks new holiday cups are what everybody's talking about, we all know it's what's inside that matters.