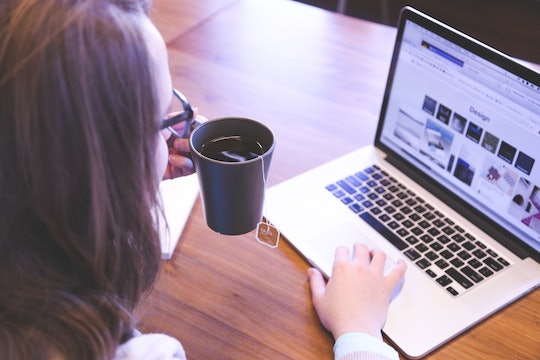 The One Big Problem With The Term "Working Mom"

There are so many conversations that can prepare you for parenthood, but very few that can prepare you for the inevitable stigmas you will (eventually) encounter. Among said conversations is the one that compares "working moms" to "stay-at-home-moms." I, for one, have a problem with both those labels, but as a mother who works, there's one big problem with the term "working mom" that I just cannot ignore. Honestly, you would think by the year 2016 that we wouldn't be continually comparing the two but, unfortunately, this debate has not yet been entirely exhausted (though we're all definitely exhausted by it).

When we (the collective "we", mind you) use the term "working mom", we're telling every other mother that doesn't clock in and out or receive a paycheck or run a business, that they don't work.

We're pigeonholing parents, and creating a fictitious representation of parenthood in general. The truth is, there are so many different ways to not only parent, but parent effectively, and to assume or suggest that the only parent that "works" is the parent that leaves the house and garnishes wages, is, you know, just oh-so false. The truth is, women play many roles and wear many hats and we're fine-tuned multitasking machines that pretty much keep the world running. But, despite our many talents and contributions and abilities, there still seems to be some internal dispute over who is carrying their fair share of the load and whether or not their choice to carry that load in a manner that works best for them, is actually the "right" choice.

There's so many double standards lurking in the lives of both "working moms" and "stay-at-home-moms." If a "working" mom seeks employment outside of the home, she's selfish and a part-time-parent and probably made to feel guilty all the damn time. If she's late or behind or momentarily distracted by what went down on Game of Thrones last night, people at work automatically conclude that it's because she's a mom. They assume that because she's a mom she must be preoccupied with meal planning or diaper changing or soccer practice, right? Sure, sometimes we're distracted by those things, but I'd be willing to bet that there's a dad out there somewhere, just as distracted by potty training his kid or taking them to the park or some other parental aspect of his life, as a mother could be. You don't ever hear stories about fathers being shamed for thinking about their kids at work, do you? In fact, if anything, it's painted as endearing and adorable.

On the other hand, stay-at-home moms make so many sacrifices for their families and are doing arguably some of the dirtiest work around, but are receiving the least amount of accolades for their contributions. They're at home, in the middle of the thunder dome itself, combating tantrums and fighting the battle that is their kids' ever-changing snack preferences. They're cleaning kitchens and reading books and doing their best to make sure that their little babies become functional adults that wouldn't think twice about where a woman's "place" should be in this world (and honestly, can we just stop with "a woman's place" thing? It's everywhere, people. A woman's place is everywhere.). Stay-at-home moms hear so many stupid comments about what exactly it is that they do, yet if it weren't for them their families would (likely) fall apart.

And because I'm fair and believe that men are also burdened with some pretty unfair labels, too; I'll additionally give a gentle nod to the dads out there, fighting their own gender stereotypes and the miscalculated, preconceived notions of others. Why do people assume that a man's place in this world is either in a business suit walking down Wall Street, or in a flannel shirt and some overalls, chopping lumber as he strokes his beard? If a man wants to stay at home with his children, great! If he wants to own a taco truck or a nail salon, or if he wants to work at a hedge fund, that's great too! Let's stop assuming that we know what's best for people based on the gender they identify with.

The biggest issue with seriously all of this, is that when "we" use the term "working mom" or "working dad" or "working parent," we're essentially excluding every other mother or father that isn't also a coworker or a boss or an employee/employer of some kind. When you assume that because a woman or a man stays at home with their kids, they're not "working," you're minimizing their many efforts. I can assure you that anyone with kids (whether it's a man or a woman, a person who clocks in outside of the home or stays at home every day to tend to their children's needs) is working all day every day.

Let's just let parents be parents. Let's not make up our own assumptions about what they do or don't do, based on what their profession is or where they spend the majority of their day. Most importantly, let's stop devaluing someone's importance based on unfair labels that don't do any parent any justice.

More Like This
Marie Kondo Gives Up Tidying Post-Kids, Sparking Joy For Moms Everywhere
Julia Fox’s Apartment Tour Is Peak Mom Realness
Paris Hilton Is Officially A First-Time Mom
When Does A Baby Recognize Their Father? A Pediatrician Explains
What Parents Are Talking About — Delivered Straight To Your Inbox