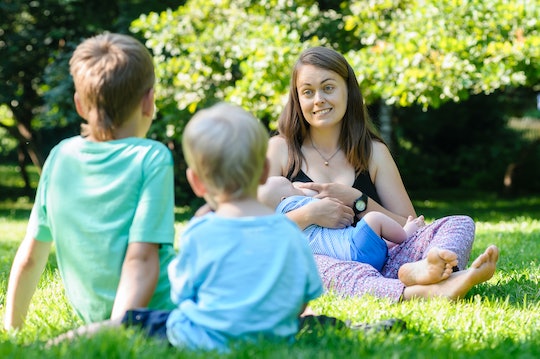 One of the first parenting decisions I ever made, before my son was even born, was the decision to breastfeed. I knew it would be difficult and I knew that my choice could be stifled (or even changed) by potential complications, but I also knew that breastfeeding was something I wanted to give to, and experience with, my son. I also knew that being in public wouldn't stop me from breastfeeding when my son needed me to. I didn't, however, know that there was one piece of advice every mom who breastfeeds in public should know, that would have made my decision to breastfeeding whenever and wherever, so much easier.

I had researched how I should breastfeed and, in turn, how I should breastfeed in public. I even stopped to think of how horrible it was that mothers needed advice like, "How To Brave Breastfeeding In Public," and "How To Feel Confident Breastfeeding In Public," and "How To Discretely Breastfeed In Public," as if feeding your kid in open spaces with other people around was some horrible thing you had to circumnavigate or simply "survive." I bought a breastfeeding cover, but only used it once; my kid always took it off and he would cry if/when I put it back on him and, well, he didn't like it so I didn't either.

Honestly, even if he did like the cover, I probably wouldn't have continued using it. I thought, as a feminist woman and a mother who is all about describing breastfeeding as a natural act that our society should stop sexualizing and stigmatizing, that I needed to prove a point when I breastfed in public. I wanted to sit (or stand) tall and let the naysayers and judgmental individuals know that their shame wasn't going to change my mind or make me feel gross or do whatever they thought their shame and judgement would do.

Then, of course, I was shamed for breastfeeding in public.

I had people tell me I was gross and ask me why I felt the need to "show my breasts" and, well, as steadfast as I was in my decision, those comments started to weigh on me. I found myself wanting to stay home more frequently, so I wouldn't have to deal with feeding my son in a public place. I became the mother that was looking for ways to "brave" breastfeeding in public and, at my lowest point, even found myself sitting on the toilet of a public restroom, hiding behind the cover of a stall so I could feed my kid without listening to the inevitable unsolicited comment.

"You don't have to be a martyr or prove a point or use breastfeeding to fight a social stigma, especially if it makes you feel uncomfortable or puts you a risk or leaves you in an uncomfortable situation."

If the act of breastfeeding in public changes someone's mind or normalizes breastfeeding, that's awesome. But, if it doesn't, that's not my problem. If it makes me uncomfortable and I feel unsafe and if I am being bombarded to the point that I am exhausted and anxious, I don't need to breastfeed in public as often as I initially planned and/or wanted to. I don't need to put myself in a situation that leaves me mentally, emotionally or physically exhausted. I mean, let's face it, motherhood does enough of that already.

Breastfeeding in public is beautiful and natural and there shouldn't be an issue around it, but there is. That's just where our society is right now, and because women are more open and unapologetic about it, I have a feeling that society won't always sexualize the feeding of a newborn or infant or toddler. Those women, who are proud and unapologetic and very open about public breastfeeding, should be applauded and celebrated, but you don't have to be that woman to be a wonderful mother and be steadfast in your decision to breastfeed. You don't need to be that mother if you don't want to be, and that choice doesn't make you ashamed for breastfeeding; it just means you value your self-care over the thoughts and judgements of others. Until breastfeeding in public is no more a "thing" than eating a fast food meal at the local food court, breastfeeding mothers need to know that they don't have to put themselves in an uncomfortable situation to prove a point.

The most important part of breastfeeding is that your kid is eating and you are bonding, not whether or not someone realizes that what you're doing is healthy and natural and beautiful.

More Like This
Ginger Zee Had A Perfect Response After A Troll Asked Her "Who's Raising Your Kids?"
It's A Beautiful Day In Jenny Slate’s Neighborhood
Here's What The Law Says About Lighting (Or Even Carrying) Fireworks In The Park
Meet Your New Favorite Blazer(s)