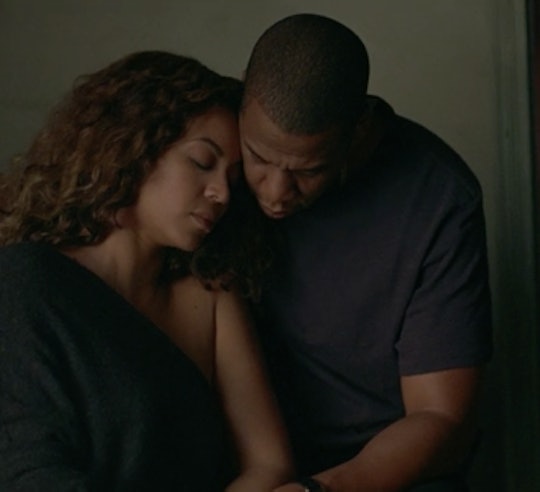 The One Thing Beyonce's 'Lemonade' Gets Right About Marriage

As much as Lemonade is about self love, its also about marriage, infidelity, and how love can exist even after its been broken. It initially surprised me to hear Beyoncé singing about being stepped out on and disrespected, only to come back around and talk about the power of her love for her partner and their union. I was less concerned about whether or not it was her story or if she was singing multiple stories that stem from different people. I was amazed to hear someone with a platform as large as hers sing about infidelity and then about the strength of love. Often when songs or stories are written about cheating, the narrative seems to follow a similar route: the cheating happens, and their story is over. Very rarely does do we hear how powerful it can be to return to love. But as much as I was surprised to her Queen Bey singing it, I knew it was true, because I lived that exact story. Beyoncé's Lemonade gets one thing right: marriage, betrayal, and love look different for every single person involved — and there's no one-size-fits-all disclaimer on how to fix it or make it work.

The first time I cheated on my ex-husband, I was in disbelief and in denial of my own actions. I kept saying "people like me don't cheat," yet I had cheated. Looking back, I understand that that statement makes no sense. A lot of different people cheat, and all for many different reasons. After I cheated, I tried to make up reasons for why I did it — reasons that would make the cheating make sense. Still, no matter how I framed it in my head, cheating was still cheating. What I did was still dishonest, and still took the trust and love my partner given me and left it on the ground as if it has no value. But even though I was horrified by my own actions, I kept cheating. I liked it almost. Perhaps because it wasn't real, it didn't exist in my real world, and I liked it that way. I remember the day I was driving home, back to my husband. I told him over the phone that I'd had an affair. I assumed my marriage would be over, that I would be a single mom to a 3 and 4 year old. I was just barely 24 years old. I hadn't even begun to think about what would happen to us.

My marriage wasn't over though. My husband chose to stay. He continued to stay and work with me for four years, and would have likely stayed with me forever. Even though everyone around us told him to leave me, he still believed in our love, in who we were. He believed in who I was. Because of his response to my infidelity, I was reminded of a love I had somehow forgotten. Now that I'm older, I'm aware that relationships evolve and change, but I also believe that love doesn't just disappear. It changes, but it's there.

I watched the story play out on the television and I saw Beyoncé. I recognized her pain and her story and the brilliance of their love, because I lived through a brilliant love like that.

Years earlier, I was cheated on once in college, and when it happened I was relieved. I wasn't invested in the relationship, and the cheating saved me the trouble of having to break up with someone. At the time I knew nothing of what it was like to love someone so fiercely, to love someone who deserves the world and more. I didn't understand what it was like to give chances to someone who probably doesn't deserve them, because in that relationship, I didn't.

My ex, who I actually hate referring to as "my ex," has always said loving me was easy. Even when it was hard, but he still loved loving me. He always told me that I was worth it. But I never believed him. Even though we're divorced now, he still tells me.

Soon after I cheated on my husband, we dealt with what it meant for our relationship and our partnership head on. I thought about why I'd chosen to follow the path I had, and why he had chosen to love me still. Deep down I wanted him to hate me, so it would make things easier on me, so I wouldn't have to deal with the complex aspects of our relationship. My therapist would ask me each time we met, "Do you think he still loves you?" and I'd lie and say, "How could he?!" I didn't want him to. Yet he never hated me. No matter what I did, he's only loved me. His love for me has always had one size: fit to burst. I didn't know love could weather being broken and torn apart. As I look back on my own marriage, I now understand the strength behind it. I stand in awe of what I experienced. The story Beyoncé weaves together throughout the entirety of Lemonade is not how and when she is going to leave her partner, it's how they will weather the storm together. I watched the story play out on the television and I saw Beyoncé. I recognized her pain and her story and the brilliance of their love, because I lived through a brilliant love like that.

The song that Beyoncé sang was the heart of my story. I was given forgiveness, and my shame was met with grace and kindness. I didn't see the greatness then, though. But I see it now.

My favorite lines came from the song "All Night Long," where she sings:

Our love was stronger than your pride.

Because it's a testament to what love is capable of doing —of being — when two people believe in it. I have moments where I'm afraid I gave up on the greatest love of my life. I walked away from a person who was willing to look at me, after hurting him, with such admiration and care. When Beyoncé's "All Night" starts with:

I've found the truth beneath your lies, and true love never has to hide. I'd trade your broken wings for mine. I've seen your scars and kissed your crimes.

I lived through this. The song that Beyoncé' sang was the heart of my story. I was given forgiveness, and my shame was met with grace and kindness. I didn't see the greatness then, though. But I see it now. I I didn't realize I was witnessing love at one of its most brilliant points. There was power and healing that it carried. It carried us both. It washed over me, and I feel that now. Someone was capable of loving me completely as I lay vulnerable with every dark and broken part exposed.

I bring this up to my ex-husband often. I thank him a lot. I apologize for not seeing the love he extended to me at the time. But it's become the basis for how I love now. He led by this example, and his example has made me a better partner, a better friend, a better lover. The other day I met someone who told me they didn't believe in true love. Their reasoning was that they felt "true love" belonged to one person. I feel differently. I believe true love can take many different forms. I was shown true love by my ex-husband. And for that, I'll forever be grateful.