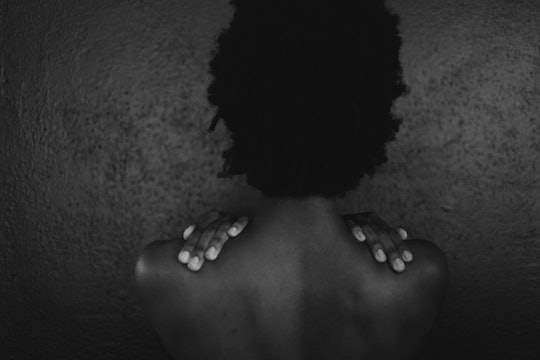 The Real Reason I Cheated On My Husband

I did the thing you're not supposed to do. I cheated on my husband. Every time I say it, the shame rushes over me, and I'm not sure it'll ever leave. But saying it out loud makes it easier to admit that yes, I cheated, not only to myself, but to others. There's no justification for my cheating, even though I tried to create some for years. Eventually I gave up on trying to make what I did to my partner OK, accepting that I did do the unspeakable. Before I cheated, I thought I was someone who could "never, ever cheat" because I just "wasn't that person." I now understand that most people probably don't ever seem themselves as "that person," because "that person" doesn't actually exist. I used to think that people who cheated weren't loyal, weren't loving, that they were probably really selfish, and that they didn't deserve to be loved. Then I became one of those people.

My affair lasted for about six months. It was wild, dramatic, and it felt like an escape from my mundane life — a life I look back on now and realize wasn't all that mundane at all. I was a stay-at-home mom to two kids under 3 at the time, and I rarely ever left the house without the kids or my husband. I hadn't dealt with the three rape experiences I had prior to my marriage. I just assumed I was OK. I wasn't. A week before I cheated for the first time, I told my husband I wasn't really attracted to him anymore. I suggested he try being with another person because it wouldn't make me upset. I wanted a change — something; anything. When I think back to this period I wish I could tell myself that everything would get better, to just hold on a bit longer. I wish I could remind myself of the commitment I'd made to my husband. Because it didn't really ever cross my mind the first time I had sex with another man.

I had, what I consider, a pretty cliché affair. I cheated on my husband with one of his best friends. I was shocked that he was OK with what was happening. Part of me really wanted him to stop things. I knew once things started between us that I wasn't going to be the one who would walk away. There were things about our affair that I loved. I loved that I could leave my reality behind and exist in a space that would never be real or true. I loved that it was a break from my life. I loved the passion. But it all eventually came to a head when I wasn't willing to leave my husband for this other man. I remember being surprised that he expected that — I thought we both knew we were involved in something that couldn't sustain itself. He'd tell me how unfair it was that I had a husband and family and that I had him on the side. But at the time, I thought that our setup was ideal. I did have my husband and my family, but I liked having him on the side.

I subconsciously wanted to sabotage my marriage because I didn't want my husband to leave me for someone else.

When I eventually did tell my husband, I remember looking at him and wanting so badly to look away. Only I couldn't. His eyes held so much pain and disappointment. I thought for sure he would leave me. If I'm honest, a part of me wanted him to. But he didn't. Instead, we went to therapy together. And it was there that I realized that I subconsciously wanted to sabotage my marriage because I didn't want my husband to leave me for someone else. To this day I still have no idea why I had this preconceived idea that I'd be the one left behind, but at the time, I believed it. I wanted to control the leaving, but he didn't leave me. He stayed with me for four more years, until I left him.

Before I left my partner, we tried really hard to fix things. There were a few months when we were in therapy that we settled back into who we were — as much as two people can after such a big rift is created in a marriage. But we weren't those people anymore. I suggested dating other people again, but this time doing it honestly. He didn't want to, but I insisted. And he gave in. He hated every moment of it, which made me spiral back into cheating. I couldn't be honest because I didn't want to hurt him, but he always found out. I think in some way that I wanted him to; I think because I began to want out. I understood that we would never be the people we were before I cheated. Even though I wanted those people back desperately, I didn't recognize we were both shells trying to fix something that couldn't be fixed. Over and over I'd beg him to let us end things, but he would hold on to us tighter. Our fights became explosive — he'd bring up my affair and my lying, and I'd sit there defeated. Our partnership didn't feel balanced or respected anymore. I knew it was my fault, so I wasn't surprised. But I didn't want to continue to live like that, so I left.

Even in a situation where I have the freedom to be with other people, I'm still finding ways to hurt the person closest to me, and it honestly terrifies me. As a person who suffers from depression, anxiety, and trauma from sexual assault, I already struggle to overcome certain thoughts and to practice self-control, but how do I stay faithful to another person when I believe that eventually, they'll just leave me?

I grew up with my husband essentially, so leaving him was extremely scary. I had no idea how to live in the world without him, but I wasn't sure we could keep going forward as broken as we were. We both came from Christian household and I think we really wanted to believe that "Jesus can heal everything." Healing, we realized, doesn't always mean returning things back to the way they were. For us, healing meant we didn't have to stay stuck in a cycle of despair and destruction. It meant we could move forward and accept our new normals.

I have a new partner now, and even though we are in an open/poly relationship, I did some things that could be considered cheating in our relationship. I saw in myself habits similar to the first time, and I wondered if that they say is true: Once a cheater, always a cheater. Even in a situation where I have the freedom to be with other people, I'm still finding ways to hurt the person closest to me, and it honestly terrifies me. As a person who suffers from depression, anxiety, and trauma from sexual assault, I already struggle to overcome certain thoughts and to practice self-control, but how do I stay faithful to another person when I believe that eventually, they'll just leave me? I think that being faithful and loyal comes easily for some. For me, it comes easily until it doesn't.

I wish I could say I have answers, that I've stopped my cheating behaviors, and that the first time was the last time. I wish I could say that I will never do it again. But I don't know. I'm hoping I won't. I'm trying not to. But I don't have the most faith. So I've created a relationship lifestyle that will hopefully support me, one that will also also give me space to be myself. Will that be enough? I don't know. What I do know is that I never want to stare into the eyes of someone I've said "I love you" to over and over, and have to talk about how I broke our commitments. I don't want to have to tell someone I promised certain things to that I've failed them. Especially when they've put their love and trust in me. I'm learning to really respect those things and put weight in those words. Hopefully, that will be enough.