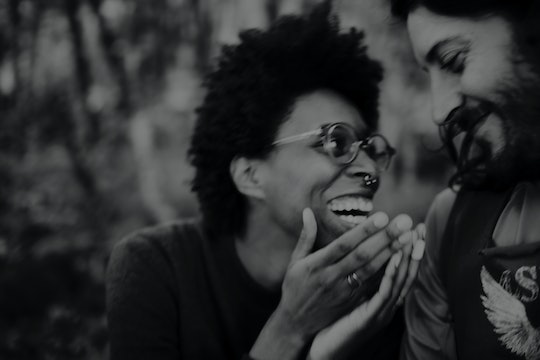 What It's Like To Be In An Open, Polyamorous Relationship

Five years ago I had no idea what polyamory was. I didn't even know what an open relationship looked like. Swinging was a thing you did in the '70s, not the 2000s. Group sex was immoral! Regardless of what I didn't know, I did know that I wanted to explore other relationships outside of my marriage. I didn’t talk about it with anyone, because monogamy was (and is) seen as the "right" way to do relationships, and the opposite of that is cheating — or so we've been taught. And cheating is "selfish," and "slutty," and "greedy." People who cheat don't just want their cake, they want to eat it too, and that's wrong.

While driving from our central California home, down to L.A. to see our family one spring, I asked my then-husband how he would feel if I had sex with another person. I told him that I loved him, and had chosen a life with him, but I thought it was possible to have other relationships outside of our marriage. I think he didn’t take me seriously, because he laughed it off, and said he wouldn’t really care. But I was serious. After that car ride, I began to research if there was a community of people who felt similarly to me. That’s when I stumbled upon open relationships and polyamory. I remember sighing with relief because I wasn't alone. Before this, I'd felt guilty, like something was wrong with me for thinking of being with other people who weren’t my husband.

While still married, my ex-husband and I decided we would try to be "open," He gave it a try, despite not wanting to. That is when I met my current partner, Noah, who was (and is) polyamorous. After having a few conversations with him when we first started dating, I realized that polyamory was something I felt fit into who I was. When I met Noah, we were very clear about what we were looking for. I was just beginning to explore the poly lifestyle, and he had just gotten out of a long-term relationship. I was dating multiple people, and Noah continued dating some of the people he had been for the past few years. I had a primary partner, while he did not. It was a perfect entry into polyamory.

Opening your relationship or marriage up requires a lot of trust and complete honesty. It's not just honesty with your primary partner (usually the person you're partnered with, not just dating), but any other primary or secondary partners. With anyone you date or have sex with, you disclose who else you have a relationship with. You talk about your sexual history, feelings of jealousy; your fears and insecurities. Individuals in open, polyamorous relationships aren't keeping secrets.

At first the idea of being completely open and honest was really hard for me to wrap my head around. I was under this impression that once you find someone, that's it. No one else will catch your eye or intrigue you. How could they when you've fallen in love with Your Person? But this isn't true. I wanted the space to explore the fascinating people I hadn't yet met, not because I didn't love my husband.

Polyamory looks different for each person who practices it. For some, their partners all live under the same roof, and they exist in a relationship together. For others, they have a more structured format with a primary partner, and partners falling under that. Sometimes dating consists of more of an emotional bond. For me, I have a primary partner, and sometimes I date other people. Other times I don't.

When I was married, I explored being open and I challenged myself to be OK with flirting with people who were not my husband. From there, I wanted to dive into actual relationships that were consistent and emotional. I found it to be so liberating and very enlightening. The biggest and most important part of venturing into new starts with you, not other people. It forces you to relearn and rewire what you've been conditioned to think about love, about relationships, and even about yourself. You have to talk about jealousy in a way that we don't ever get to as a society. I think polyamory is beautiful because love gets shown in a new way. Love doesn't have to be conditional, or come with a list of "I will love you until you do these things." It can actually thrive and grow while you extend that love to other people.

Since I just went through a divorce, I'm not in a space to have other intimate relationships quite yet. I believed being open about what I wanted with my ex-husband would help save our marriage, but it didn't. It just made me cling to something that once was, and helped me understand that you don't open your marriage up as a last resort. Being in an insecure place with your primary partner, then trying to bring in multiple people, only makes for an even more shaky foundation. Leif, my husband, and I eventually divorced.

I don't think that monogamy is wrong. How could it be? Love between anyone is beautiful and it is good. Polyamory might be different, but that doesn't make it wrong, either. It's another way to love and be loved. It's another way to challenge yourself as a person, and to learn much more than what you might have learned with just one person.

More Like This
43 Instagram Captions For National Brother’s Day That Say It All
Say What's In Your Heart With These Stepmother's Day Quotes
Stepmom Quotes & Sayings For Every Occasion
This Mom Gave Birth On Graduation Day, So The University Brought Her Degree To Her