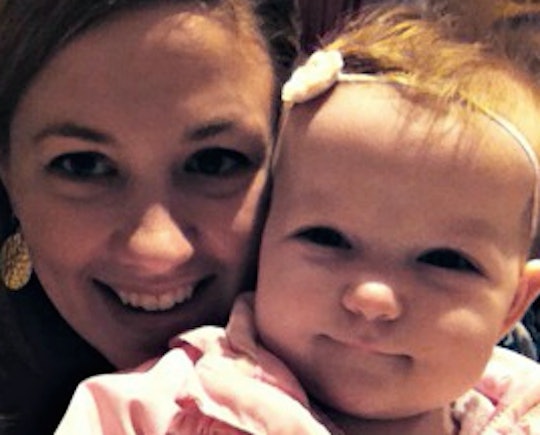 One of the hardest moments of my life was when I pulled my hand out of my 5-year-old daughter's on her first day of kindergarten. I'll never forget looking down at her tiny hand in mine and watching, as if it was a force I couldn't control, as our fingers parted. When I had her, five years earlier, I'd just turned 22 and was still reeling from the shock of how drastically my life had changed in just a few short months. As someone who had been so intent on being the "perfect" good girl and a high-achiever — which included never getting a B grade and landing a scholarship to college — I really didn't know what to do with this new version of myself. And I had absolutely no clue what being a young mom would be like: the pressures I'd face to be "perfect," the way I felt like I needed to have and do it all, the fact that I always felt like I needed to go above and beyond to ensure that my daughter would be OK and that I hadn't failed by getting pregnant with her so young.

More Like This
Here's The Deal With Babies Who Sleep With Their Eyes Half Open
30 Vintage Photos Of Parents Giving Their Babies A Bottle
Tax Day Is Almost Here: Everything You Need To Know About The New Child Tax Credit
18 Best Sand Toys In 2021 For Babies, Toddlers, & Kids

And it wasn't until that moment, five years later, standing on the steps of her kindergarten classroom, that I realized that I had made the biggest mistake of my parenting life. After my daughter was born, I became someone I didn't recognize. I was suddenly Chaunie, who'd "failed" by getting pregnant at 21; Chaunie, who'd "make a mistake" by having a baby before I was married; Chaunie, who'd done everything right but now had to live with this very big "wrong." Even though I loved my daughter with an intensity I didn't know was possible, I was still struggling, trying to reconcile this new version of myself with the one I'd previously spent my whole life cultivating. I didn't know how I could still be the successful, motivated, ambitious person I'd always considered myself while fighting against this new version: a young mom who everyone assumed just didn't know any better.

So I set out to do what I thought would make things right again, and in doing so I wanted to prove the world and myself wrong. I decided I would still be a successful, ambitious woman and a great mother, damn it. From that moment on, I was committed, almost the point of obsession, of doing everything perfectly and "doing it all." I enrolled in a Master's program at school; I worked night shifts as a nurse; I carried my young, blossoming family financially; and as if that wasn't enough, I worked another job during the day from home.

It wasn't until the moment that I dropped her hand on her first day of kindergarten and walked away that I realized how very, very wrong I had it all.

I refused a babysitter because I couldn't bear the thought of someone else caring for my baby, and I was convinced she needed only me in her life. I made huge plans for my future and I felt like underneath it all, I had one mission in life: to be perfect to prove I was still worthwhile.

And as my daughter grew, I threw myself into doing everything that I thought a "good" mom would do. I was barreling, full-force on the perfect motherhood train and never stopped for a minute. We played together all day, every day, as I led rousing imaginative games that left me totally exhausted and drained by the time bedtime rolled around. I never put her down, to the point where my daughter actually never crawled. She was memorizing whole books by 3, knew shapes and colors and the alphabet because we worked on them constantly. (But only in "fun" ways, because I also read enough studies to know that play-based learning is the best kind.)

It wasn't the crafts or the alphabet matching game we played, or the countless baking sessions we had while I quizzed her on measurement cups that mattered to the person my daughter would become — it was the love I had for her.

I worried constantly about doing everything right and I hosted play dates and made sure she had a full schedule of activities and classes. (But again, not too much!) I know I gave my daughter a good foundation, but it wasn't until the moment that I dropped her hand on her first day of kindergarten and walked away that I realized how very, very wrong I had it all.

My daughter never needed all of the things I drove myself crazy trying to give her.. I never needed all those things. Our busy agendas and itineraries and play dates and educational activities weren't necessary. Did they hurt her? No, of course not. She had a blast back then, and she's a smart and motivated young lady now. But it breaks my heart to see her now, because she's so much like me. I know the burden of growing up thinking you need outside accomplishments to have value in life.

I was so hell-bent on making sure that she had everything because I was so worried I'd taken something from her by being a young mom who was so unsure of herself. I poured myself into motherhood in a way I thought would make up for my own insecurities, but deep down, I had it all wrong.

I wish I would have done things a bit differently for her during those first five years. I'm not going to beat myself up about it, because I was a new mother and I know that, sometimes, you have to live through experiences to learn from them, but the truth is, I feel incredibly sad when I look back and realize that all I needed to do back then was calm down.

I wish that I would've spent more time just relaxing with my daughter. I was so firmly anti-screen in those days that I freaked out if my daughter watched any TV at all. Now, I wonder what I was so so worried about. My daughter would have been just as happy to snuggle with me on the couch while I put my feet up with a much-needed coffee as she would have been with me dragging her to story time. I was so hell-bent on making sure that she had everything because I was so worried I'd taken something from her by being a young mom who was so unsure of herself. I poured myself into motherhood in a way I thought would make up for my own insecurities, but deep down, I had it all wrong. It wasn't the crafts or the alphabet matching game we played, or the countless baking sessions we had while I quizzed her on measurement cups that mattered to the person my daughter would become — it was the love I had for her.

In a word, I wish I would have just enjoyed motherhood a little more instead of worrying so much about being a bad mother. Honestly, looking back, I was so intent on "proving" to the world and to myself that I was a good mom just because I had my daughter young that I stressed myself out to do everything "right." But my daughter and I already were just fine — if only I would've relaxed enough back then to realize that all we really needed was each other.