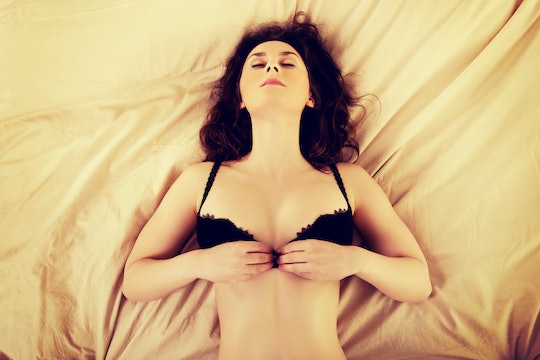 Although sex doesn't have to include an orgasm to be enjoyable, it's always a major plus, right? But once you finally master the act, is that all there is? An orgasm is defined as 'a climax of sexual excitement' and derives from the Greek word, orgasmos, which means 'excitement and swelling.' Sounds pretty straightforward (and a little anti-climactic, honestly), but we all know orgasms are so much more than that. And no, once you master it, that isn't all there is. There are ways to amplify that simple definition, including one thing you can do every day to make your orgasms stronger.

I know, another word you've heard a thousand times. But like orgasm, kegel is a loaded word that means so much more than you think. It's touted as an exercise to strengthen your pelvic floor muscles and is huge for women after childbirth, but it's also incredibly beneficial to your sex life.

For one thing, those muscles you're exercising with kegels? They're the same muscles that contract during an orgasm. The stronger they are, the more powerful they can contract while you're climaxing and send you to another level. Kegels aren't meant to "tighten" your vagina, but to make those muscles stronger and more toned. Like any other muscle in your body, when they aren't exercised or used often, they become less powerful. Many lackluster orgasms are from a lack of sensation which can be from weak pelvic floor muscles.

And let's not forget that by working those muscles, you're also able to use them during sex. The stronger they are, the more you can squeeze on to your partner which gives your vagina a stronger grip and increases contact between you and your partner.

Obviously, the other huge bonus is you can literally do keels anywhere at any time. Nobody will even know! Spend a few minutes on your commute, at your desk, while you're folding laundry — it doesn't matter. The exercises are beneficial no matter what and don't require a sports bra. Everybody wins! (Mainly you though. Get you some of them intense orgasms, girl.)