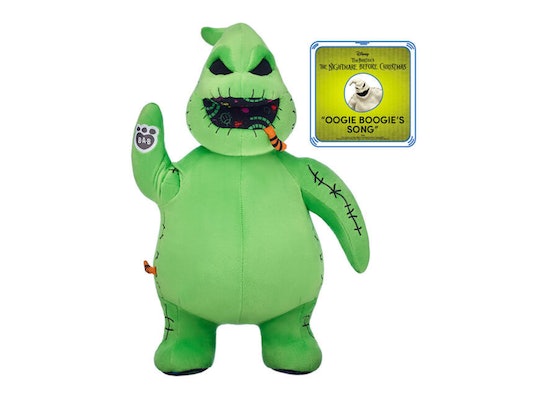 What's this? What's this? Well, it's certainly something that will make every The Nightmare Before Christmas fan scream. You can now add an Oogie Boogie Build-A-Bear to your collection of memorabilia from the classic Halloween (or, is it Christmas?) tale, and I'm here to tell you that this villain is so much cuter in bear form.

While I wouldn't necessarily put Oogie Boogie himself as he appears in the movie in the "loveable" category, the Build-A-Bear version of the burlap-clad boogeyman looks incredibly snuggly. His plump sack-like body looks prime for cuddling up next to while you watch the movie. But don't worry, unlike the real Oogie Boogie, bugs won't pop out of him if you squeeze too hard.

If your Halloween celebration this year looks like less trick-or-treating and more like a creepy, yet family-friendly movie night at home, Disney's classic The Nightmare Before Christmas is likely at the top of your list of films to watch. It's equal parts eerie and silly, and the characters of Jack Skellington, Sally, and Oogie Boogie are just iconic. Having a movie-watching character companion in stuffed animal form can take your fright fest to the next level and make this Halloween an unforgettable one.

The 16-inch tall stuffed Oogie Boogie toy features the character's slime-green colored exterior that's typically only seen under a black light, complete with areas of black stitching on his arms and legs. His sinister smile reveals a black void full of electrified wormy swirls and bug illustrations in a rainbow of colors that pop. Complete with an orange and black worm hanging out of the side of his mouth and another one popping out of his side, this character totally looks like he should be celebrating bug day instead of Halloween. His haunting black eyes aren't totally terrifying, but let's just hope he doesn't turn into a swath of bats.

Hands down the best part about the new Build-a-Bear collectible is that this not-so-scary friend can also sing "Oogie Boogie's Song" if you purchase the $8 sound chip that plays the catchy jazz tune. Personally, I cannot imagine having an Oogie Boogie that I couldn't sing and dance with. The song may not be as iconic of a holiday theme as "This Is Halloween," but it's certainly a close second.

Available for order exclusively on the Build-A-Bear website, the stuffed Oogie Boogie retails for $29 without a sound chip or $37 with sound included. Currently, the toy is out of stock on Build-A-Bear's website, but fingers crossed a re-stock happens before the Halloween season is over. If not, I guess we'll have to hold out hope for the kind of Christmas miracle the likes of which only The Nightmare Before Christmas knows how to deliver.

Also available to order online at Build-A-Bear and new this year is Jack's adorable ghost dog Zero. Alas, just like the Oogie Boogie, the pumpkin-nosed sidekick is already sold out. While you're waiting for Oogie Boogie and Zero to come back in stock, you can still snag Jack Skellington and Sally bears at Build-A-Bear online and get your fill of the movie's ghoulish gang in snuggly bear form.