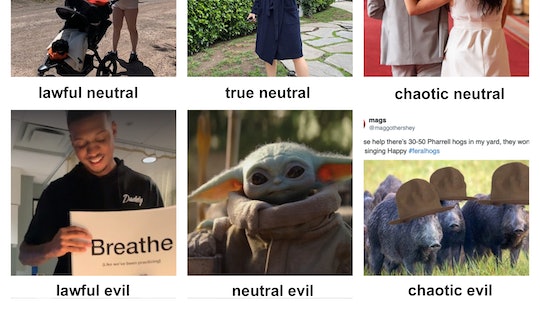 The year 2019 is in the bag, which means it's time to put away your thoughts about the Peloton ad and instead ponder the era that was with the official (not official) 2019 alignment chart for parenting.

Below, we pick apart the elements of parenting virality as an epidemiologist might pore over the tiny agents of chaos at work in a petri dish: 2019 was beyond the scope of even futurists to predict, with elements of true good, but also a lot of feral hogs. Too many feral hogs.

However, if we zoom out from the coiled Nose Fridas and sedan-sized postpartum underwear, we can see that the universe remains in balance: the evil and chaotic was more than offset by the good and adorable in this, the last year of the decade (depending on how you're counting). Let's go to the chart to take in the foundational moments in parenting, then unpack them, that we may learn from the tea leaves.

This was lawful in that it was literally a legal proceeding and good in that it was lit.er.a.lly. just so, so good. On kindergartener Michael Clark, Jr.’s adoption day, his teacher and parents worked together so that he could be surrounded by love in the courtroom. You guys Michael’s class waved around little paper hearts! They all talked about how much they loved him! MICHAEL WORE A TINY LITTLE BOW TIE AND COORDINATED VEST! I can’t. I cannot. It’s too much.

Neutral Good: Two Toddlers Running Up To Hug Each Other 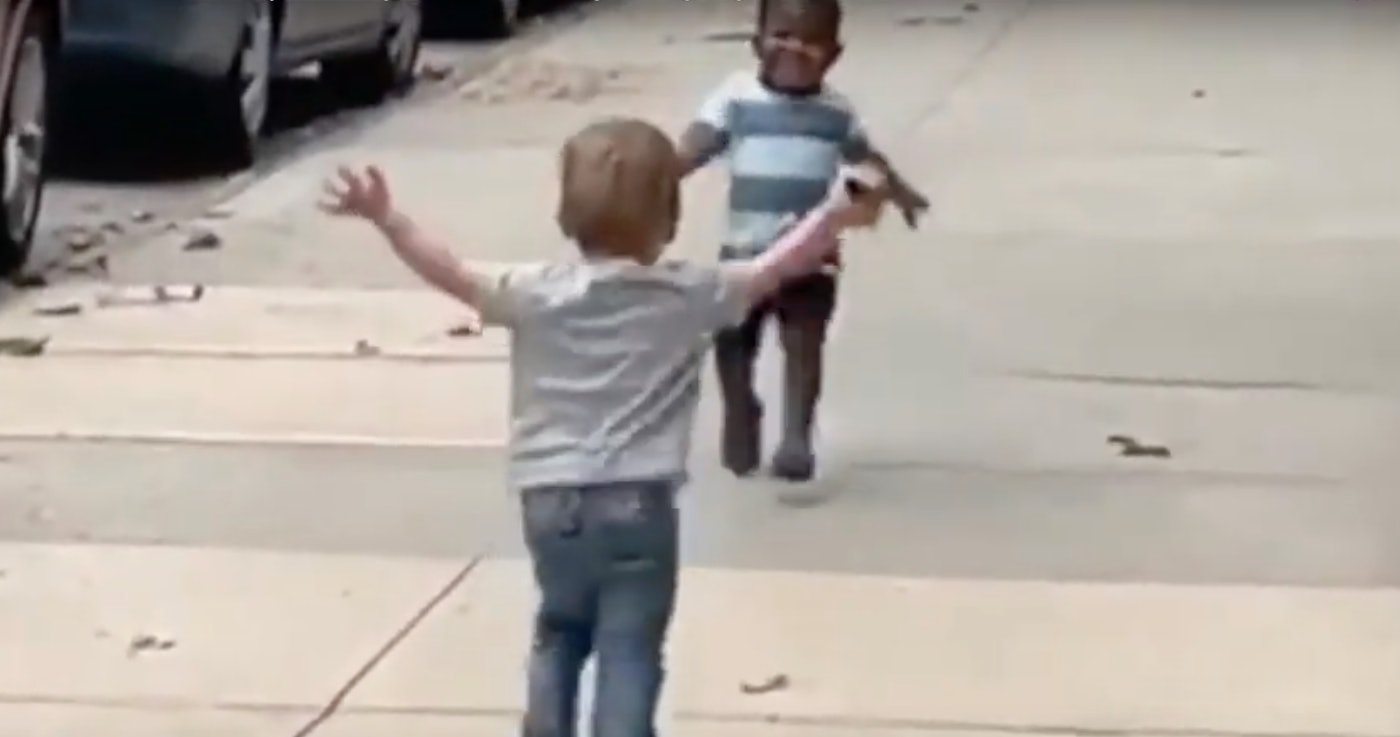 There’s a lot you can see on the streets of New York ranging from fun and weird to “OMG is that rat fighting a pigeon for a moldy scrap of pizza, WTF?!” But even on a good day, 99.99% of what the city streets can show you will not be nearly as good as two sweet toddlers excitedly squealing “My friend! My friend!” and running to embrace. It’s just so pure.

Chaotic Good: Baby and Dad Having Nonsensical (But Perfect) Conversation

This video of comedian DJ Pryor having a conversation with pre-verbal, 19-month-old Kingston makes absolutely no sense and yet, somehow, is the only thing in 2019 that really makes sense. Does that make sense?

Whom'st among us who have given birth cannot vouch for the comfort, security, and absolute necessity of hospital-issue mesh underwear in the days and weeks following delivery. For too long, this doctor-and-midwife-recommended uterine-content containment unit has been kept in the secret world of the birthing bed: but no longer! Amy Schumer is not the first mom nor even the first celebrity mom to go public with photographic evidence of her mesh panties appreciation, but she’s doing her bit to show the world that this is a lawfully neutral part of childbirth.

True Neutral: Jennifer Garner At Her Kids’ Bus Stop In A Robe

The dress the Duchess of Sussex aka Meghan Markle wore to present wee baby Archie to the world was what I’d describe as “Windsor Neutral.” Basically, it’s what you would expect a member of the royal family to wear when they know they’re going to be photographed. It was stylish, timeless, and conservative. If she had worn this get-up to any other event I doubt anyone would have particularly noticed it… but she wore a white dress at a time we all know she was still rocking a phonebook-sized pad. Like, who wears white on the lower half of their bodies in the immediate postpartum period? This girl, apparently. That dress was pure white but her decision to wear it was pure chaos.

Lawful Evil: That Guy Who Re-Enacted The Scene From Love Actually In The Delivery Room

Do you remember in Jurassic Park when Dr. Ian Malcolm frustratedly tells the quixotic park owner “Your scientists were so preoccupied with whether or not they could that they didn’t stop to think if they should!”? This viral video of Kendall Caver giving a low-tech Powerpoint presentation to his laboring wife is basically that in a nutshell.

There’s built-in plausible deniability that this was anything but a well-intended gesture, but we also sort of hoped she threw up on those signs. 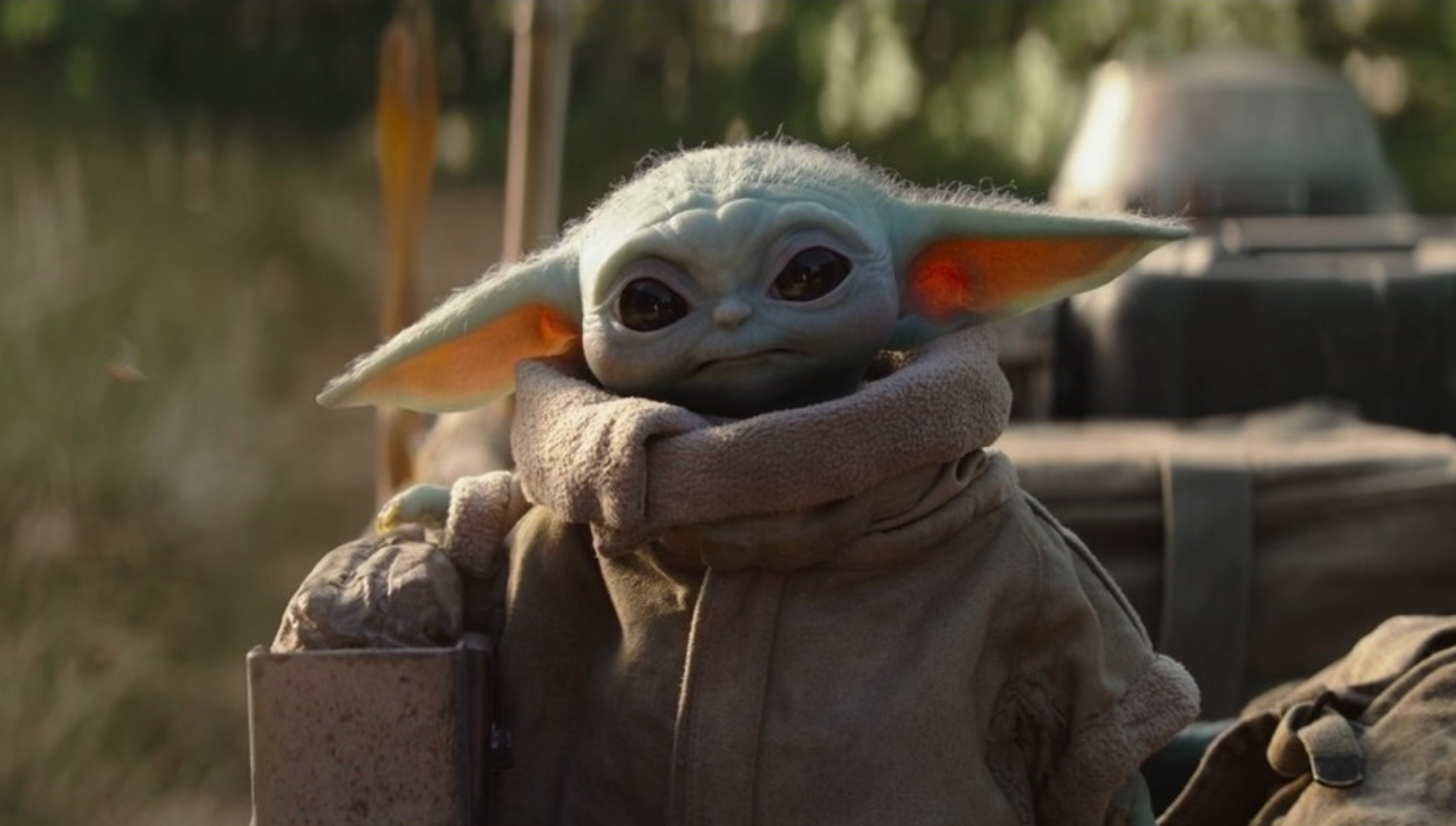 When putting this chart together, one of the first things my editor said was “breastfeeding Baby Yoda is probably on there” and I said “I’m sorry what?” She then sent me several links of Twitter users and the internet in general expressing a desire to (and questioning how they could) breastfeed viral sensation Baby Yoda. I am just… there are no words for how I feel about that. Do I think this is an intentional evil that has been brought into the world? No. I think people are just being honest about their primordial need to treasure Baby Yoda… but this is still 100% The Dark Side. Y’all are tampering in God’s domain with this one...

Chaotic Evil: 30-50 Feral Hogs Coming For Your Children While They Play

This was all fun and games when it was just a meme but then we learned WAIT ACTUALLY HOARDS OF FERAL HOGS ARE A THING AND IT’S A PROBLEM. Apparently they just go around barrelling through neighborhoods, wreaking havoc and destruction in their wake. So, you know, add that to the list of absolutely ridiculous things we have to worry about as parents.