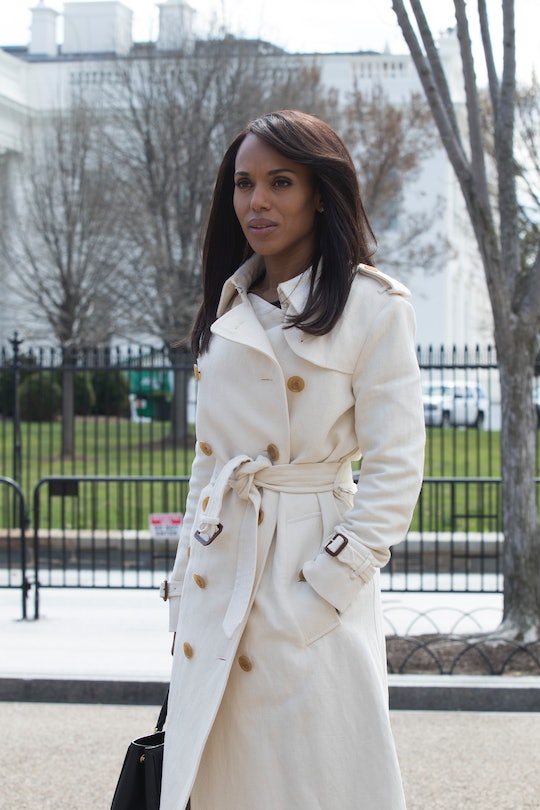 The 'Scandal' Series Finale Ended On An Empowering Note

One of the running themes of Scandal has always been female empowerment and Thursday's episode made sure to deliver on that theme once more. In the final moments of the episode, two young African American girls were shown walking through the National Portrait Gallery and stopped at one portrait in particular. It wasn't of a former president, but rather someone who made just as big of an impact on the world as any man (if not more). Suffice it to say, the portrait of Olivia Pope in the Scandal series finale was an empowering final image to close out the show.

While it's unclear exactly how Olivia managed to get herself in the prestigious Washington, D.C., museum, the message was clear. Her portrait was meant to express all the hard work that she did for the White House during the years she spent working with both Fitz and Mellie. And based on the admiration that could be found on the little girls' faces, Olivia has become an inspiration for future generations of girls who can see themselves reflected in her. It was a powerful image and one that seemed to mirror the real life little girl who caught gazing at Michelle Obama's portrait back in March.

The little girl, 2-year-old Parker Curry, visited the gallery with her mom and according to her mother, she was immediately awestruck and totally impressed by the former first lady's painting up on the wall.

When the painting itself was originally unveiled, Obama spoke in her speech about what she hoped it would represent to little girls everywhere:

I’m also thinking about all of the young people, particularly girls and girls of color, who, in years ahead, will come to this place and they will look up and they will see an image of someone who looks like them hanging on the wall of this great American institution.

She went on to say that once upon a time, she was one of those little girls, looking for a similar role model to look up to and added, "What an incredible journey we are on together in this country. We have come so far."

Once again, that speaks volumes about what the final season of Scandal represented. Sure there were a ton of ups and downs and a complete 180 or two from some of the characters, but in the end, it was about a female president breaking the mold and working for a White House she believed in, with a strong female by her side to help her along the way. I think that's the reason Olivia got to have a portrait of herself in the National Portrait Gallery, even though she wasn't a president and was never married to one.

It's hard to say exactly why Olivia's portrait was hanging in the gallery at the end of the finale Thursday night. In a way, I'm inclined to believe that it was simply because of all of her hard work. However, other views might think that it was meant to symbolize an eventual presidential rise for Olivia, despite her refusal to go back to work with Mellie. I mean, she was basically the president for Fitz's terms in office and part of Mellie's first term, so I guess anything is possible.

While much of the excitement of Scandal's final season was probably in the episodes preceding the actual series finale, things were definitely wrapped up in a fairly neat way. Olivia and Fitz may or may not have ended up making jam in Vermont, but her portrait made the biggest statement of all and pretty much summed up her impact on everyone else in the show for the past several seasons.