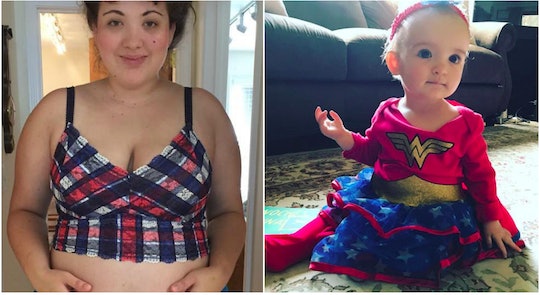 My diet is an ever-changing and wholly personal thing, which is precisely why I refused to follow any pregnancy diet rules when I was expecting my daughter. For years, I've essentially practiced intuitive eating, in that I listen to my body and eat what I want when I'm hungry or have a particular craving. I very rarely focus on whether my food is "healthy" versus "unhealthy," and avoid assigning words doused in morality to specific meals or habits.

Truth be told, I love food. I love the ritual of eating with friends and family and the satisfaction of preparing something that's actually tasty. I love treating myself to a Big Mac or a platter of sushi alike. I want to experience all the foods, and I don't limit myself along the way or moralize about food. I did for a long time as a teen and young adult, and I refuse to go back to that place.

As a plus-size woman, I'm often chastised for this. When I am not directly told that I should be restricting calories, I'm advised to achieve as "balanced" a diet as possible. The thing that makes me feel most balanced, however, happens to be the routine I already have. Some days, that might mean I'm eating mostly carbs and sweets. On others, I may devour a Mediterranean salad and some avocado toast. On others still, I'll have a whole medley of flavors — and I wouldn't have it any other way. So, I didn't follow a pregnancy diet. And if I could do it all over again, I can't say I'd change a thing.

I ate raw fish. I drank alcohol and smoked cigarettes. I never prioritized protein. Still, after several scans, genetic counseling, blood work, and countless other tests, we learned that our baby was developing just fine.

Regardless of the specifics of the many pregnancy diets, tips, and tricks that are out there, most experts agree that pregnant women need to consume extra fruits, vegetables, and meals high in protein, dairy, and wholegrain carbohydrates. As Britain's National Health Service explains, foods that are high in fat, sugar, or both are meant to be avoided, as they can "can make you put on weight" or "increase the amount of cholesterol in the blood."

According to LiveScience, other things to avoid include fish with high mercury levels, which can "pass through the placenta and can be harmful to an unborn baby's developing brain, kidneys, and nervous system," unpasteurized food that may cause food poisoning, and raw meat and fish, which can lead to the Toxoplasma infection and "cause problems such as blindness and mental disability later in [the baby's] life."

As for me, I had a relatively short pregnancy. My partner and I found out we were expecting 20 weeks in, precisely at the halfway point. I'd shown no signs or symptoms, I was on birth control, and I had been diagnosed as "practically infertile" for over a decade of my life. Suffice it to say, I definitely didn't follow a pregnancy diet in those early months. I ate raw fish. I drank alcohol and smoked cigarettes. I never prioritized protein. Still, after several scans, genetic counseling, blood work, and countless other tests, we learned that our baby was developing just fine. She was a little bit smaller than average (and still is), but there's nothing inherently unhealthy about that fact alone.

I obviously took some precautions in the latter half of my pregnancy. I avoided the raw fish, begrudgingly limited my caffeine intake, started taking prenatal vitamins, and drank more milkshakes. That's about as far as my pregnancy diet went, though. My love of food hadn't disappeared simply because there was a baby in my belly. If anything, I felt it was more important to continue experiencing as many tastes and varieties of meals as possible.

During that time, I remembered stories my mom had always shared with my brother and me. When she was pregnant with him, she craved chicken constantly. It was practically all she ate. Thirty-eight years later, my brother is a chicken fanatic. It's his favorite meat. He'd eat it for every meal if he could. As for her pregnancy with me, our mom loaded up on seafood. For snacks, she always wanted cottage cheese and peaches. To this day, salmon, sushi, tuna, and cottage cheese mixed with peaches are among my favorite foods.

My mind was preoccupied with setting up a nursery for our daughter and figuring out what balance of work and parenthood might be best for me. Calories and fat levels were very, very low down on my list of concerns.

There's no solid science to prove that her diet affected our own palates, of course. Still, I couldn't shake the feeling that continuing to eat myriad types of foods (as and when I wanted) would help my kid develop equally multifaceted tastes. I didn't worry about how much weight I may or may not gain, either, because I'm not about that life. Not to mention that I had plenty of more pressing things to worry about, like the fact that I was unexpectedly going to be a mother soon. My mind was preoccupied with setting up a nursery for our daughter and figuring out what balance of work and parenthood might be best for me. Calories and fat levels were very, very low down on my list of concerns.

My daughter is only 15 months old now, so it's too early to tell how her palate will develop. What I do know, beyond a doubt, is that my own love of all the food, including during pregnancy, hasn't affected her negatively. This is not to say that we should all eschew every piece of nutritional advice we're given. During pregnancy, there are clearly reasons why certain foods are to be avoided while others are to be embraced, most of which exist for the benefit of our babies.

What I would say is that (besides the obvious guidelines, like avoiding sashimi platters), we shouldn't allow ourselves to become so hyper-focused on our pregnancy diets that we stop listening to our bodies. I firmly believe that pregnancy could be a far more beautiful experience than it often is if we weren't conditioned to pick apart our figures, our diets, and our general lifestyles the whole way through. It's in our power to re-frame our priorities, though. I ultimately decided that eating the things I loved and craved would be more beneficial to my mental health and wellbeing than following a rigid plan created by someone else for someone else; and I wasn't wrong.