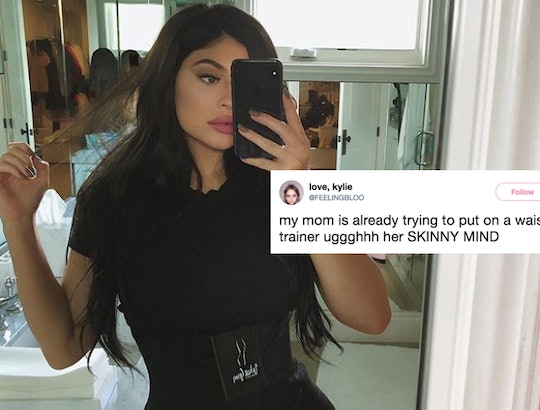 As the line goes, the worst thing you could say about me, I've already thought about myself. In the early postpartum period with my son, it was: "I am overweight, lonely, and heartbroken." It was four days after I brought my son into the world, and I was miserable. I was swollen, sleep-deprived, in pain, at least 30 pounds heavier than I had been before I was pregnant, and lonely. Unfortunately, the pressure on new moms only made me feel worse.

Yes, there was a tiny human being attached to my boobs around the clock, and a seemingly never-ending rotation of friends and family members wanting to visit, but as a new, clueless mother, I had never felt more alone. The worst thoughts I had about myself — the kind I would try to bury in the corners of my mind, lest someone think I was feeling sorry for myself at a time when I was "supposed" to be the happiest I've ever been in my life — were being reinforced by a culture that sets unrealistic expectations for all women, and new mothers in particular. With the added burden of sleep deprivation, I found it increasingly difficult to fight against the prevailing narrative that, as a new mom, I was worthless. I was nothing. That my life, as I had known it, had come to an end.

I was reminded of this early dark period when reading about Kylie Jenner, who gave birth to a baby girl in February. In the tabloids, the new mother has been shamed at every turn for hiding her pregnancy, becoming a mother at 20, choosing not to marry her daughter's father, pick your poison. But it was a picture posted of a Life & Style Magazine on Twitter, describing Jenner as "overweight, lonely, and heartbroken," that sent me back in time, to my own experience as a new mom. I was horrified.

And when, a month later, Jenner was shamed for promoting a waist trainer in an Instagram post — telling fans it helped her "snap back" post baby — I was hit with another stark realization that, as women consistently and relentlessly scrutinized for how our bodies are perceived, we cannot win. If we don't adhere to unrealistic beauty standards, we're judged. If we try to adhere to unrealistic beauty standards, we're shamed. And somewhere in between, our tattered sense of self worth takes a hit.

And the pressure is real. A survey by FitRated recently found that 65 percent of the 1000+ respondents worried about their body-weight postpartum, while less than half worried about their postpartum mental health. The physiology of a mom's body postpartum is something doctors urge patience with, but pressure on mothers in the vulnerable postpartum phase can be damaging in the short term. As many a 20 percent of women experience postpartum depression, according to the World Health Organization (WHO).

The CDC lists the symptoms of postpartum depression as: crying more often than usual, feelings of anger, withdrawing from loved ones, feeling number or disconnected from your baby, worrying that you will hurt your baby, feeling guilty about not being a good mom or doubting your ability to care for the baby. We are beginning to talk about how to better support new moms. But this bizarre strain of tabloid concern-trolling and social media slamming channels the exact mindset we need to counter. A new mother feeling overweight, lonely, and heartbroken could very well need mental health support.

Women go through an immense change in a short period of time following birth, and it is vitally important that women feel comfortable reporting their symptoms, that we normalize them and encourage women to seek help, not ratchet up the pressure and shame them into retreat. A 2014 survey conducted by BabyCenter found that out of 1,500 mothers who believed they suffered from depression after having their babies, only 21 percent were given a diagnosis of postpartum depression. A reported 25 percent of the mothers polled said they were too embarrassed to admit their feelings, 23 percent said they felt guilty about them, and 16 percent said they didn't want to be labeled as suffering from a mental illness.

And yet every day, from unrealistic representations of postpartum women, to weight loss ads directed at new mothers hellbent on "losing the baby weight," to unattainable expectations that encourage women to "have it all" at the cost of their mental health, our culture is labeling new mothers. If they're not a size 2, they're overweight. If they're not married, they must be lonely. If they're not perpetually smiling and waxing poetic about the undeniable beauty of new motherhood, they must be heartbroken. And if they're willing to use waist trainers to appease a dangerous cultural norm, they're vapid and self-centered.

As a new mom, I could smile for the pictures. I could say the words everyone wanted to hear, like "I love being a mom" and "I feel great" and "I've never been happier." But beneath the painted smile and the uplifting sentiments was a woman who was incredibly scared, self-conscious, and feeling more detached from those she loved more than any other time in her life. My partner and I weren't married, and didn't want to get married (in fact, almost four years later we're still not married) but I could feel the judgment and condemnation from those who truly believe a baby in a baby carriage can only come after marriage.

I was still significantly heavier than I was pre-pregnancy three months after my son was born, so the raised eyebrows and "I wonder when she'll lose the baby weight" glances were not lost on me. I spent hundreds of dollars on weight loss products. I forced myself to skip meals. And as someone who was struggling, and failing, to recover from an eating disorder, I had never felt more uncomfortable in my own skin; skin that was holding an extra 30 pounds and the weight of social beauty standards to my aching bones.

I'd like to say that, in 2018, these messages — that moms should lose any weight they gained during pregnancy immediately, feel nothing but happiness, and give their all to their children, every hour of every day — are a thing of the past. But... they're not.

And as a woman far away from her mother, who lived in another state, and with very few friends who were moms, too, I could feel my sadness create a palpable wall around me, closing off potential lines of communication to a support network that, if I had spoken up earlier, probably would have been more than willing to help me seek the care I undoubtably needed. Because these feelings convinced me that I wasn't a normal new mom feeling normal new mom feelings. Instead, I was convinced I was nothing more than an overweight, lonely, heartbroken shell of my former self who needed to do whatever she could to get back in her size 2 jeans, but without anyone knowing I was actually trying. I was weak and failing as a parent and incapable of giving my brand new baby everything he wanted and needed. But I was also selfish, for feeling anything less than blissful, focusing on my appearance, and convinced that voicing my feelings would only prove that I was unwilling to prioritize my son.

I'd like to say that, in 2018, these messages — that moms should lose any weight they gained during pregnancy immediately, feel nothing but happiness, and give their all to their children, every hour of every day — are a thing of the past. But as Jada Pinkett-Smith said in a 2012 interview, they're not.

"I'll tell you something about being a mother, and some of the messaging we get in this country about being a mother. That you have to completely sacrifice everything. You have to completely sacrifice every single thing. And I think that what the re-messaging, as mothers, need to have and gravitate to is that you have to take care of yourself in order to have the alignment and the power to take care of others, at the capacity that we do."

If we are to truly put our money where are mouths are once a year, when we shower mothers with gifts and cards and profess them to be of vital importance, then we, as a country, must change how we talk about postpartum women. We must take back the narrative, and be unafraid to be open, honest, and shameless about the complexities of new-mom life. There is no shame in feeling overweight, lonely, and heartbroken. There is no shame in feeling overwhelmed, upset, and detached from this new life you chose for yourself. There's no shame in putting in a concerted effort (in a healthy way) to feel more at home in your body and happy about your size. These are not atypical feelings, but they can be a sign of something that demands support, understanding, and, for some, medication and therapy.

It was four days after I brought my son into the world, and I was miserable. I was feeling fat, isolated, and desolate. But having the courage to own those feelings, instead of allowing them to be used against me by a culture that demands I am seen and not heard, that I procreate regardless of whether or not I want to, and that I shrink myself in order to make those around me feel more at ease, is how I eventually got around to feeling like myself again. Like, well, a mom.