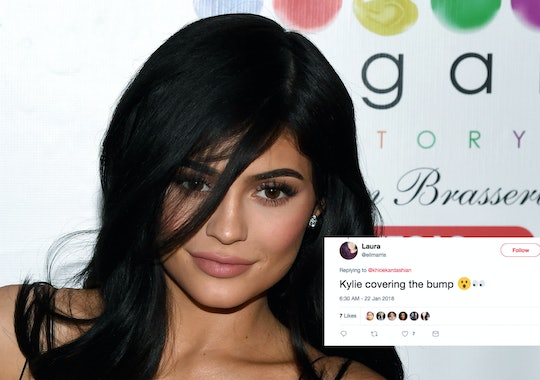 Rumors about Kylie Jenner being pregnant have been rampant for months now. The makeup mogul has yet to confirm the news, but if she really wanted to keep her pregnancy a secret, she's not doing a very good job. Kylie along with sisters Kim, Khloé, Kourtney, and Kendall all appear together in a new ad campaign for Calvin Klein – and fans think Kylie is so obviously hiding a baby bump.

In each of the photos, Kylie is noticeably covering her stomach, by both enveloping herself with quilts and by wearing more conservative outfits than her sisters. It is even more noticeable in the photos where her sisters' stomachs are exposed, as they're modeling new Calvin Klein underwear and bras. Kylie's big sister Khloé finally confirmed her pregnancy about a month ago, so some fans think Kylie is next.

Us Weekly shared a few images from the campaign on Instagram, and fans immediately latched onto Kylie's calculated coverups. "Hm look at Kylie COMPLETELY COVERED IN BOTH," commented one user. "Kylie covering up her baby bump," added another. "So is Kylie pregnant or not," read another comment. "Odd that Kylie is the only one hiding her belly 🤔🤔🤔," read yet another comment.

Even though Khloé's bump isn't visible in the photos (she also appears to be covering her stomach in some of the shots, though she doesn't appear to have a bump in others), Vogue notes that Khloé was pregnant during the photoshoot. “The bond we share is infectious,” Khloé told Vogue of her sisters. “Even though we pick on each other like normal siblings, we are each other’s biggest supporters . . . I want people to see unity, loyalty and strength. We’re a mix of everything, and I think family is the ultimate American dream." Khloé seems to be a really big fan of Calvin Klein, considering she wore a bra by the brand in her pregnancy announcement.

Kylie didn't comment on her alleged pregnancy when Vogue interviewed the quintet of sisters — the only detail about her the magazine noted is that she is a big fan of the Calvin Klein bras and underwear. “They are so comfortable, and I’m still obsessed with them today,” Kylie told the outlet.

The Calvin Klein campaign is focused on family, so the Kardashian-Jenner sisters were a natural choice to represent the brand.

"The evolved #MyCalvins concept has family at its center, a display of unity between strong individuals, further emphasized by the symbolism of the traditional American quilt," an email statement from Calvin Klein read. "This campaign captures these bonds and brings to life different ways we can inspire families — both born and made — to connect with one another, and celebrate the things that unite us." Speaking of quilts, how convenient that quilts are the perfect item for strategically draping over one's body to conceal a pregnancy!

The five sisters also appeared in a short video for the campaign, where they prove they don't really know how to play Never Have I Ever. No one is holding up fingers, and they hardly respond when people reveal what they've never done. When Kim says "Never have I ever gotten a tattoo," she is met with complete silence, even though some of her sisters do have tattoos. It's kind of confusing.

Gossip about Kylie Jenner's alleged pregnancy began exactly four months ago, on Sept. 22, 2017. TMZ broke the news, adding that the father was reportedly her boyfriend Travis Scott. People also added that the baby was due in February, which, if true, means Chicago West and Khloé's upcoming bundle of joy will have yet another cousin very close in age. All that being said, it's totally up to Kylie if and when she announces her rumored pregnancy. (A representative for Kylie has not returned Romper's request for comment regarding the reported pregnancy.) When Khloé confirmed hers, she explained that she kept the news a secret for so long so she and partner Tristan Thompson could "enjoy our first precious moments just us." Perhaps Kylie is doing the same.