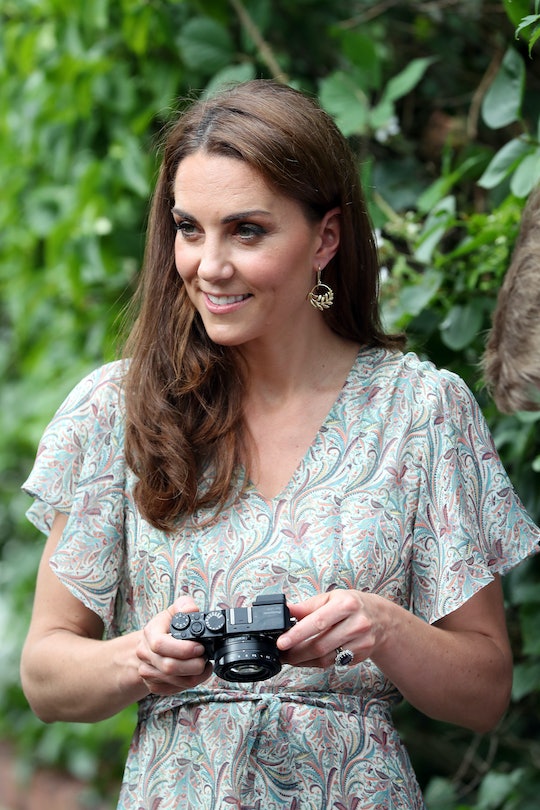 Prince Harry and Prince William share an interest in mental health as a result of their childhood and their mom, Princess Diana's, struggles. Meghan Markle brings with her an advocacy for international women's issues. Cousins Eugenie and Beatrice are getting involved with career mentorship for kids, given that they are princesses who also hold regular jobs. Clearly, the next generation of royals will lead according to their gifts and interests. So it's fitting that the Queen just gave Kate Middleton a new royal gig that's very artsy and suits her talents perfectly.

As People magazine reported, England's monarch recently made the decision to pass the torch in regards to one of her pet projects, the Royal Photographic Society.

The Queen, 93, has been the organization’s "royal patron" since 1952, the same year of her coronation, making this a commitment Elizabeth has maintained for 67 years. So it's kind of a big deal she's passing the gig along — and it couldn't be going to a more perfect candidate within the Windsor ranks.

Middleton, aka the Duchess of Cambridge, has proven herself to be the royal family's "artsy" one (well, if you don't count Markle, the Duchess of Sussex, herself no slouch in the arts as a professional actress). Middleton's commitment to photography and the visual arts has been growing over the years, though, and she's become basically the official royal photographer of the Windsor kids, George, Charlotte, and Louis.

Although it's been claimed, as we've reported, that Middleton's motivation in becoming the lens-woman in the family is so she could control who takes photos of the kids, it's also become clear that she's an ace at it. Seriously, she can come to my house anytime, I need new family pics. Sadly, I suck as a photographer.

Her family snaps of baby Louis and Charlotte's first day of preschool are ridiculously professional-looking, and there's definitely more than just duty involved when this mama grabs her camera.

While the Queen has been busy giving Middleton more opportunities in the family "firm" for a while, this newest gig sounds like the perfect fit.

"The Duchess has a longstanding interest in photography, and this patronage will further highlight the beneficial impact that art and creativity can have on emotional well-being, particularly for children and young people," noted a press release from the palace, as Harper's Bazaar retold it.

After all, as that magazine noted, the duchess studied art history in college, has served as patron of London's famed National Portrait Gallery since 2012. Just last year the Duchess became the first royal patron of the Victoria and Albert Museum (that's the institution that has all the royal gowns, guys, which is where I'm dying to take my daughters).

As People chimed in, the announcement came at the same time that Kate was seen attending a photography workshop for kids.

In our country, there's so little funding for art in most public schools, and things like photography skills can only be passed on to our kids through the family or having to pay beaucoup bucks for summer art programs, just so our kids can learn a little drawing or painting.

As a parent, this greatly saddens me. That's why I truly applaud Middleton's commitment to underscoring the importance of exposure to the creative arts at a young age. I wish she were a figurehead in our country, too. Maybe then we might jointly realize that classes like drama and photography have changed more than a few young lives, and should be part of national curriculums. I can dream, can't I?