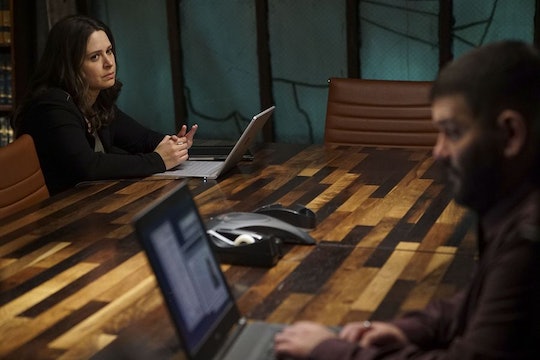 Quinn's Story On 'Scandal' Was Given A Reality Twist

Out of all of the changes that fans expected to see on the 100th episode, the Quinn Bachelor parody on Scandal was probably one of the biggest surprises and the perfect way to show her alternate reality. We all know Quinn as the lawyer-turned-trained-killer who was mentored by Huck, but in the "what if" episode, the idea was that Quinn's life would have been drastically different. Instead of introducing Quinn well after Olivia had established her business in this alternate Scandal reality, viewers got to see her in the form of a contestant on a Bachelor-type of reality show that Huck is apparently a huge fan of in this trippy timeline. Oh, and side note: in this world, Huck never ditched his homeless man hair and is very much rocking a frazzled and bearded look that somehow makes him even more endearing.

Quinn eventually turned into a Huck Jr. in the real Scandal timeline, but apparently if she had never been called on to interview for Olivia Pope and Associates, she would have cut her losses with a career and tried out for a show that hilariously resembles The Bachelor. And not only that, but she would be competing for tiaras (instead of roses) and would go by the name of Lindsay D. It makes sense, since Quinn was originally Lindsay Dwyer, but it was all too perfect.

When the suitor gave Quinn another tiara on the show within Scandal, he mentioned how he knows she loves to "torture men" (har har) and she happily accepted. Eventually, Quinn, a.k.a. Lindsay, appeared on Fitz's talk show The Grant Report and after an awkward and much too weird makeout session that ended in Fitz drunkenly rejecting her, she stormed out.

But while on the show, she did talk about becoming the next "Princess." Which, it's safe to assume, is a clever substitute representation of The Bachelorette. I can't be the only one who immediately hoped that it meant Huck would clean himself up to compete for her love, right? Too much? Maybe.

Overall, it's clear that the call to fix the election in 2010 was the right one for pretty much everyone involved. Either way, nothing could have turned out perfectly for anyone on Scandal, but in the alternate reality, viewers finally saw what would have happened if things had gone a different way. And in the end, I think everyone was better off with Fitz getting into office — even if it was the wrong way.

Obviously now it's going to be hard not to really want Huck to end up with Quinn in the real Scandal world, so if nothing else, this "what if" episode made it clear that the two of them are endgame. And they don't even have to give each other tiaras to prove it.