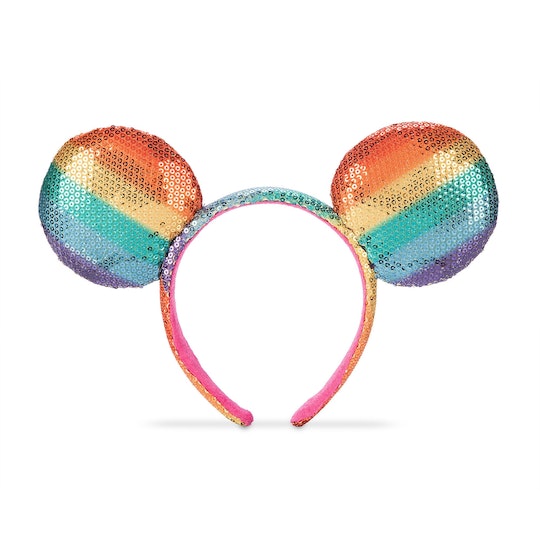 Pride is almost here, and companies are all headed somewhere over the rainbows for the next month, celebrating the diversity and inclusiveness of the LGBTQIA+ community. A standout in the crowd this year is Disney's new rainbow collection for Pride that has everything from water bottles to mouse ears, and all of them are absolutely gorgeous.

If there's any souvenir cuter than a set of rainbow Mickey Mouse ears, I've never seen it. While Disney has been consistently improving on their level of inclusivity both for their employees and the characters they create, this line really gasses it up (as does their first ever official Pride event to occur June 1 at Disney, Paris, according to The Huffington Post). The line is already on sale, even though Pride season begins on June 1. For every purchase made in Disney's rainbow collection for pride between now and June 30, Disney will be donating 10 percent of the proceeds to GLSEN, a group that works with educators and schools to develop inclusive curriculums and programming that combats homophobic bullying promotes wellness in the LGBTQIA population of students.

Pride at Disney and elsewhere is not just fun for queer families, these products are equally gorgeous for all allies who wish to make the world just a little bit better.

When I was growing up, Pride stuff wasn't a thing. If you wanted something rainbow oriented to show your love of the gay community, you had to venture down to the bohemian store near the public university and pray that they had something awesome available, or show up at a Pride parade and hit the booths. It was frustrating, and the lack of merch felt like another layer of oppression. Everything that I had was either handmade or special order. Now, it's hard to find a store that doesn't have a great selection of Pride goods, and I love every minute of it.

Just a few days ago, a friend of mine and I were discussing how there isn't enough merch or resources out there for the baby gays, and then today I see this line specifically designed with children in mind (and Disney will be donating a huge chunk of change to a group that specializes in K-12 education and outreach). Wow.

The world is changing quickly, and thankfully, with things like this collection, it's changing for the better.

Every year, there are tons of unofficial gay and Pride gatherings at Disney; they're pretty big deals at this point. Gay Days have been going on at Disney for years, the events spanning from family friendly activities to Drag competitions and pool parties. They're an essential part of queer American culture. I am hoping that with Disney France having an official Pride celebration this year, American Disney will soon follow.

Rainbow ears and tee shirts are great, but a queer princess falling in love just like any other gal would be even more spectacular. I have a feeling it's not far off. And hopefully sooner rather than later, because I have a whole list of princesses that I stan regularly. (Tell me Elsa and a nonbinary Jack Frost would not make the most amazing couple on the planet.)

For now, though, I will be content buying up all the pins and cups for my kids, and wearing all the ringer tee shirts, because that's just the kind of mom life I live. It's the best, most inclusive kind of mom life. Plus, who doesn't love rainbows? They go with absolutely everything, and they trust me when I tell you they hide a world of stains, so they're even better for kids.