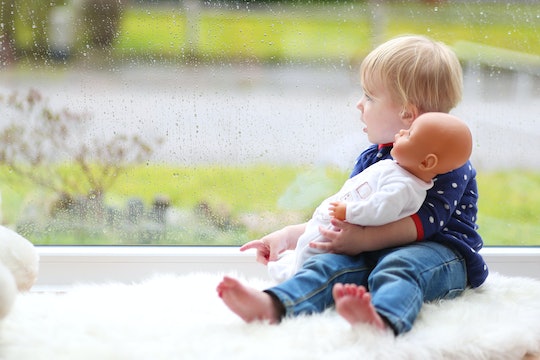 I recently bought my young son (he’s still under 1 year old) his first real baby doll. In most progressive parenting circles these days, it’s no longer shocking for little boys to play with dolls. And it isn’t exactly news that I bought my son a doll. However, gender essentialism is still alive and well in the world of toys for young children, and that is often illustrated by the attitudes of parents and caregivers when it comes to things like dolls. Standard practice seems to be that boys can play with dolls if they are already around (say, if they have a sister who has dolls), but they’re only given a doll if there is a justifiable reason for doing so. Some parents will, for example, gift a young boy with a baby doll before a new baby is born into the family so that he’ll “have a baby of his own.” But most often, boys only get dolls if they explicitly ask for them.

In our family, however, we got our son a doll long before he was old enough to ask for one (and we don’t plan on having another child), and there’s one very simple reason for that: we value nurturing, and think nurturing play is good for all kids, not just girls.

I’m so proud of my son when I see him being sweet and gentle with his doll. The fact is that when we wait for male children to ask for dolls, but get them train sets before they know what a train even is, we are doing them a great disservice. It reveals our most implicit gender-based biases: that caregiving is a task for girls and women, and that it is somehow exceptional for men and boys to participate in nurturing.

In one of the musical numbers in Free To Be You And Me there is a young boy named William who desperately wants a doll. Someone brought up to me when I posted pictures of my son smiling and clutching his new baby doll on my private Facebook. The difference, however, is that William had to beg in order to get a doll, and had to convince his vaguely homophobic father that his son having a baby doll was not a threat to his masculinity. My wife and I didn’t want our kid to have to deal with anything like that, and so the same way that we got him a block set as soon as he was developmentally ready for one, as soon as we thought he could appreciate a baby doll, we got him one. And you know what? He freaking loves that thing.

Several months ago, our kid became obsessed with pictures of babies, drawings of babies’ faces; basically anything to do with babies. And I mean obsessed. Around the same time, he was also showing a greater interest in his stuffed animals as opposed to other toys like blocks and teethers. I was watching him play, joyously tackling and cuddling and kissing his stuffed panda bear over and over again, and I told my wife that it might be a good time to start thinking about a doll.

I want him to understand that the work of taking care of others is important and valuable, regardless of who does it or what their gender happens to be.

He actually had a small pink doll when he was about four months old, but it was tiny and had a rattle in it, and I don’t think he ever recognized it as representing a human. And anyways, it was lost in a move. I wanted to get him something that would speak to where he was at now, and would grow with him as he makes the transition into make-believe play. We needed something small enough for him to handle, but large enough as well. It needed to have a face that he could read as “baby,” but we also didn’t want any hard plastic parts so he could snuggle it without worrying. So I did what any self-respecting Millennial parent would do, and I obsessively combed Amazon until I found it.

All young mammals play, and it’s thought that a big part of play is practicing skills they’ll need later in life. Human children are no exception. I don’t know if my kid will grow up to have children of his own, but he may. And I know so many men of my own generation who desperately want to be good and engaged fathers, but struggle to connect with their children because they spent their childhoods assuming that babies and kids were someone else’s problem. In my opinion, that’s crap. So I’m doing everything in my power to ensure that my son won’t have that experience, which means encouraging nurturing play right now, in the same way that I would if he happened to be a girl. I want him to understand that the work of taking care of others is important and valuable, regardless of who does it or what their gender happens to be.

These days, his favorite thing to do with his baby doll is to put it in his high chair, and hand it other toys. I’m so proud of my son when I see him being sweet and gentle with his doll. The fact is that when we wait for male children to ask for dolls, but get them train sets before they know what a train even is, we are doing them a great disservice. It reveals our most implicit gender-based biases: that caregiving is a task for girls and women, and that it is somehow exceptional for men and boys to participate in nurturing. That simply isn’t fair to little boys, who deserve just as much opportunity to develop their nurturing skills and instincts as their female peers.

My feeling is, just as as our daughters deserve the same opportunities as our sons, our sons also deserve the same opportunities as our daughters. In my home, that's incredibly important, and it's a value my wife and I want our child to carry with him throughout every facet of his life. Fostering that type of learning begins now. He can play with dolls and love to hug, care for, and provide for someone else the same way he can play with trains and trucks and other toys.