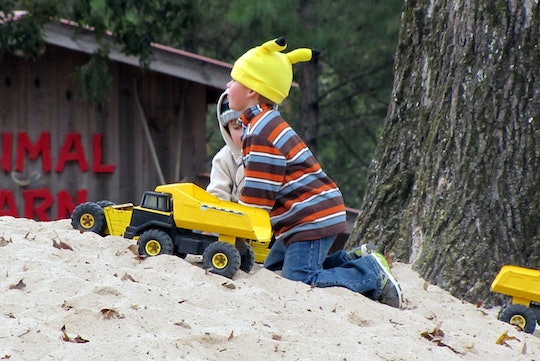 As someone who has identified as a feminist for pretty much all of her adult life, I found it easy to define how I wanted to raise my daughter when she was born; I'm a woman who's a feminist, so I know roughly how to help put together another one of those. My son? Not quite so easy. It took me some time watching him excitedly playing with my daughter's train set before I realized that the toys your children play with are not what makes you a bad feminist (or what makes you a "good" feminist... Really, looking to outside evaluative factors to "grade" one's feminism isn't the best thing to do at all, but you get what I'm saying.)

When I had my daughter, I spent a lot of time railing against the system: I bought her every color of clothing except pink; I encouraged her to play with cars and trains; I frowned when someone bought her a gift that was pink when it could have been...any other color. It made me feel good to know that her favorite color was blue and that she loved to watch Thomas and Friends as much as she loved My Little Pony.

When my son came along, it took me a bit of time to notice that the same type of gender stereotyping was happening with him as with my daughter, mostly because it's honestly something that still comes across as more socially acceptable. I started to feel nervous that my son was getting so many trucks, cars, and trains as gifts, and wondered whether he loved them because that's just who he was and what he liked, or if we'd set him up to love them.

When I watched really closely, however, I saw that his love for dolls, dancing, and the characters of Frozen was also an important part of who he was. And I began to realize that as long as our kids are exposed to toys without framing them for gender, they can just enjoy them for what they are: toys, and really, truly nothing more. Specifically, what toys our kids are into are not markers of the quality or authenticity of the feminism of that kid's parents.

For me, accepting that my son being super into conventionally "boyish" things did not, in fact, make my feminism a lie, took all of about a second to digest. In theory, it might seem problematic to call yourself a feminist and then have a son whose room is filled with trucks, but once you see it in real life, it's so obvious: Kids are as complex as adults, and what my son chooses to play with is merely one part of who he is. Plus, I now also know what an impact hammer is and what it does. So there's that. Here's why my son liking "boy" things really has nothing to do with how "good" of a feminist I am: