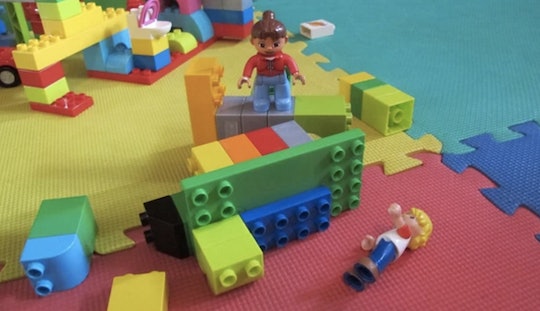 I Stopped Gendering My Kid's Toys & Here's What Happened

I had a baby, and then in the blink of an eye, a toddler, and after a while I began to notice that all my son's trucks and cars become “guys.” He'd call them the "guys," and so my partner and I did too. All the little people and animals were male unless they’re marked as female some way. I never stopped to pay attention to the fact that all the toys splayed around the room were "guys," but once I took note, I was shocked. Before this I'd never worried about the fact that my son gendered all of his toys to be male, but once I saw the startling regularity with which it happened (and how easy it was for me to do it too), I realized we needed to make a change. Fast.

I want to break this habit for my son's sake. I don’t want him to grow up thinking that men are the default humans, and that women are some kind of freaky emotional subset. Right now, people are looking at a male-dominated professional world and starting to ask where the women are. I want him to see the same problems, and to ask the same questions, or even to help even out those discrepancies in the future. But he’s only 2, and we’re a long way from the boardroom.

So for a week, I decided not to place a gender on anything or anyone while hanging out with him.

As I mentioned, I wanted to dedicate a week to breaking our collectively bad habit. I was interested in seeing just to see how many times I slipped, and what I learned along the way. How much do I defer to a masculine pronoun even when I don’t mean to? What would I notice when I paid close attention to the way other people talk around my son? And most importantly, what was he soaking up in the midst of all this?

I was ready to uproot the gender norms that had sown seeds in our home. And this is what happened:

Any toys, animals, or people with obvious or previously-established gender would be referred to with their appropriate pronouns. Some of his toys are male and some are female. Dr. Spaceman, his astronaut toy, is a woman, even if her namesake includes the world “man.” The lion with the mane is a he; the lion without, a she. The two zebras toys are just zebras. Instead of asking, “Does he want to eat some blueberries?” I’d ask, “Does this zebra want blueberries?” Oh, and when we saw people out and about, I’d refer to them as “kids” and “babies,” even if they’re wearing one-piece baby girl suits.

I Realized How We Talk To Kids, Especially Boys

On the first day, I had a big talk with my son about not how everyone is a "guy.” He calls a lot of people and objects “guy,” probably because we use it with him a lot. You’re such a big guy. What’s up, little guy? Are you a sweet guy? That’s what he hears, so that’s what he repeats.

Later that night, of course, I slipped and called his ice cream truck a guy, and I had to roll my eyes at myself. When I thought about it, I realized I was even doing a male voice for the truck. Do I ever do a female voice for trucks? Do I ever do female voices for any of his animals or other toys other than the ones who’re obviously female, like his mama manatees?

My son is entering an important time in his life. He’s picking up so much of language, and my partner and I don’t want him to learn that people are male by default. When I grew up, astronauts and doctors and presidents and garbage collectors were men by that same rationale. Women in those professions were a footnote. In some professions, that’s still the case. So it’s no wonder that a lot of people in our society grow up thinking men are the default humans, and that women are an anomaly.

Even so, I want my son to grow up thinking that all genders are equal and capable as a matter of course. This realization made our “little” experiment all the more important.

I Got Really, Really Angry

When you start to think so often about not using as much gendered language, it creeps into your parenting in other ways. I do try, all the time, to get at least one book with a female protagonist when we go to the library. Sadly, sometimes it takes a little looking in order to find something good. On this particular trip, I got a book with a female protagonist, and she decides to make a movie, with her little brother “helping” by dropping things and taking naps. Halfway through filming, he decides that he is going to be the star and breaks in. Then they rewrite the script so he’s the “good guy” and she’s the “bad guy.”

The book ends with her thanking her brother — for napping and ruining her vision, of course. I go on a rant about this one morning, after we’ve read it twice: And of course, who is it by? A MAN. My son was not particularly impressed by my rundown of why this is annoying, as he was already on to playing with blocks. And because he's 2. So really, does he even care how the book ended? It’s a perfectly cute book, I guess, but from now on, I’ll make sure that we get books by female authors instead of just female characters, for crying out loud.

On the last day of my experiment, I was listening to a discussion of a 2016 Republican presidential debate, and the pundit on the radio referred to “the guys on the stage.” THE GUYS? I yelled at my dashboard. Plenty of people thought that the lone female candidate had the strongest performance of the night, and she was completely taken out of that conversation with that word.

My experiment suddenly felt all the more important. For my son, and the rest of the world.

I Slipped Up A Lot

During this week, I probably slipped four or five times. Toys and trucks became “this guy” or “he” for no reason, other than that’s how I think of them, too. And I realized that I have to change my thinking before I can change my son’s. Each time, I tried to correct myself. I wasn’t mad about slipping, but more interested in how deeply ingrained my slip-ups were. I did it without even being conscious of what I'd done and I was both happy and sad that my son isn't yet old enough to call me out on my gendered mistakes.

But I realized that teaching him was inevitably going to teach me. And I am more than willing to learn.

My Husband Wanted In On The Experiment Too

I didn’t tell my husband that I was doing this, but somehow, he picked up on what I was trying to teach our son. He started using “they” with a couple of the toys. He doesn’t spend as much time thinking about these things as I do, but he takes it seriously when I bring up my concerns. OR maybe he’s been paying attention to my rants. Either way, he’s an A+ husband and dad who’s had good role models himself. I’m going to tell him so.

It meant so much that we were able to take on this aspect of parenting together. Even though I hadn't necessarily asked him to be part of this experiment, the fact that he saw what I was trying to do and made an effort to do the same spoke volumes. We're both feminists, and proud of it.

It is really hard to unlearn what’s been deeply ingrained in all of us, even when it’s at the top of your mind and you’re trying your best. I won’t be able to follow my son around all his life, making sure he doesn’t soak up anything implicitly or accidentally sexist. What I can do, though, is reinforce gender equality at home. He’ll have a female astronaut and lady trucks, and about half of his animals are going to be female, just like in the animal kingdom. Removing gender is a form of misgendering, too, I’ve recently been reminded. Not all of his trucks are “guys,” but not all of his people are “they,” either. His Superman toy is a dude, but just because a toy is wearing pants doesn’t mean that it’s a “boy.” I’ll let him know that whether someone chooses to be male or female or not conform to any gender is their own business, and all he needs to know is how to treat people with respect.

Women and girls will be powerful in the world that we create at home, and I’ll do my best to be an example. I’ll try to lay a groundwork so that maybe for his generation, things will be a bit better. I’ll do my best and trust him with the rest. Until then, Dr. Spaceman is going to continue her important scientific experiments, and she’s gonna kick ass for all womankind.

More Like This
34 Instagram Captions Perfect For Preschool Graduation Photos
17 Best Potty Training Products For Toddlers
From Captions To Gifts, These Are All The Kindergarten Graduation Ideas You Need
Here’s What You Need To Know About That Viral 1960s Baby Formula “Recipe”