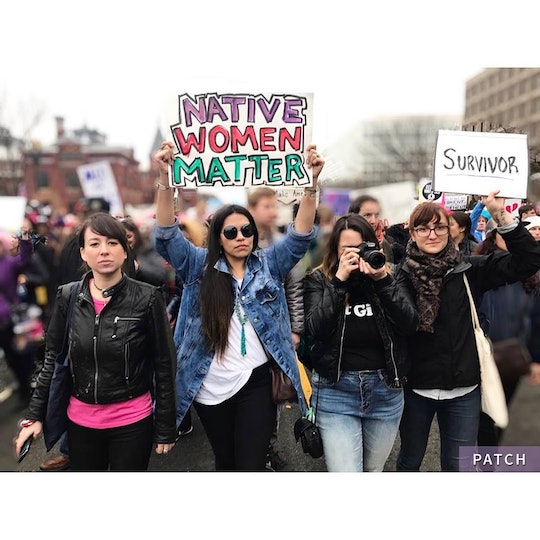 I Didn't March With My Kid & Here's Why

On Dec. 9, 2016, when a permit was secured for the Women's March on Washington, I knew what my family would be doing on Jan. 21, 2017. On Jan. 12, 2017, I changed my mind. While I knew I'd still travel from New York City to Washington, D.C. to march in solidarity with millions of women, women of color, the LBGTQ community, Muslim American Women, and countless others protesting President Donald Trump's inauguration, I decided I couldn't bring my 2-year-old son with me. Sadly, the reason I didn't bring my kid to the Women's March on Washington is exactly why the march matters. I felt it was unsafe to have my son witness an historic event that celebrated inclusivity and equal rights for all — and to me, that feeling is so indicative of the damage this new administration has already done for women, for marginalized communities, and for mothers. I couldn't shake the slightest possibility of an attack on a group of women that could put my son in danger — and that, to me, highlights exactly why the continued fight for women's rights is so crucial.

While the founders of the Women's March on Washington originally secured a permit for 200,000 to protest in the country's capitol, an estimated 500,000 people descended on the nation's capitol the first full day of President Donald J. Trump's term. The protest, according to the Women's March on Washington website, was intended to send "a bold message to our new administration on their first day in office, and to the world that women's rights are human rights. We stand together, recognizing that defending the most marginalized among us is defending all of us."

As powerful as that message was, and as inspired as I felt walking through an overwhelming sea of kind, passionate, and inspired people, that message was tainted with the palpable reality I don't have the luxury to escape: even though I was surrounded by like-minded people, all exercising our constitutional right to peacefully assemble and protest our government, I didn't feel safe enough to bring my family with me.

Whether or not that message was received by President Trump and his new administration remains to be seen. After all, the nation's new president spent his first day in office attacking the media over reporting the size of his inauguration crowd. However, I can say that as powerful as that message was, and as inspired as I felt walking through an overwhelming sea of kind, passionate, and inspired people, that message was tainted with the palpable reality I don't have the luxury to escape: even though I was surrounded by like-minded people, all exercising our constitutional right to peacefully assemble and protest our government, I didn't feel safe enough to bring my family with me.

The march itself was incredible for a variety of reasons, all more powerful than the next. Listening to Janelle Monáe lead thousands of people to repeatedly yell the names Sandra Bland, Natasha McKenna, Tanisha Anderson, Jordan Davis, Eric Garner, Trayvon Martin, Mohamed Bah, and Dontre Hamilton — all people of color shot and killed by police officers or killed while in police custody — was a poignant and powerful reminder of the necessity of intersectional feminism and police reform. Witnessing mothers march with their daughters and sons proved, once again, that political action knows no age. Standing shoulder-to-shoulder with a Native American woman and an elderly Muslim American woman as Ayesha Ahmed, who traveled from Chicago to attend the March on Washington with the Muslim Women's Alliance said, "I would call it a 'We are watching you, Trump' kind of march," was a reminder to all allies of marginalized groups that we must do better to hold those in power accountable when they attack and dehumanize others.

Every message — whether it was shared by an organizer, a high-profile guest speaker, or one drawn on a poster board and held high by fatigued arms — reverberated the marrow of my bones. There was a palpable feeling of power in that crowd; a feeling so many women are encouraged to ignore or stifle in our everyday lives. However, I also found myself hyper-aware of my surroundings, searching the joyful, smiling, chanting, and determined faces of the crowd for someone obviously angry and potentially malicious. Engrained in the syllables of words like "women's rights are human rights," and "my body, my choice" was, for me, the fear that a peaceful march would be attacked by those who believe the demand of equality for all is a "radical anti-American sentiment."

As a sexual assault survivor, a proud feminist, and simply a woman on the internet with an opinion, I've become somewhat accustomed to the constant (and now, thanks to the rhetoric of the current administration, emboldened) attacks by online trolls and faceless Twitter eggs and Trump voters. I've been told I should die, that I don't deserve to be a mother, that my son would be better off if he died, and a slew of offensive, choice names close-minded people lean on when all else fails them. I've also watched women like Lauren Duca be attacked by Martin Shkreli and threatened by nazi apologists because she articulated her political opinion, and I've seen women like Leslie Jones harassed and threatened because they're women of color. I know what far too many people in this country think of women's rights, and consider the acquisition of those inalienable rights by certain groups of people to be a direct attack on their own. That painful reality is nothing new, but it's one engrained in every woman and marginalized individual in America. It's why the LGBTQ community, people of color, Muslim Americans, women, different able-bodied individuals, and other marginalized groups simply asking to be treated as equal human beings is considered "radical."

When I found myself searching for a threatening "Twitter egg" in a sea of pink hats and emboldened protestors, I knew I'd made the right decision for my peace of mind, but I was enraged that making that decision was even necessary.

That painful reality is also why, after weighing the pros and cons and potential problems of bringing my son with me, my partner and I decided against it. We had to ask ourselves the hard questions, the questions that seem to deter from the otherwise hopeful and inspiring sentiment of such a powerful demonstration. We had to ask the questions we're told we shouldn't ask ourselves because that means "they win," but that you absolutely have to ask yourself when you're responsible for another human. We had to consider the questions that seem ridiculous if nothing happens, but obvious if something horrific actually does.

What if there's an attack?

What if there's a bombing?

What if there's a shooting?

When I found myself searching for a threatening "Twitter egg" in a sea of pink hats and emboldened protestors, I knew I'd made the right decision for my peace of mind, but I was enraged that making that decision was even necessary. Especially since other parents felt empowered to safe enough to bring their children with them. They marched with their babies strapped to their chests or pushed in their strollers or holding their hands, and I suddenly found myself embarrassed for my fears, even if they were (and are) valid and the result of past physical and sexual abuse. I felt my pride breaking as I realized the harassment of others did take its toll on me. The abuse made me afraid for my child in a way I have not yet had to come face to face with. I could put myself in a potentially dangerous situation, but I couldn't do the same when it came to him.

And that — among many other reasons — is why the Women's March on Washington was so necessary. That underlying fear every marginalized person knows — the fear that standing up and demanding better for yourself and your family will somehow hurt you and your family — is why constant vigilance, intersectional feminism, and continued resistance is paramount. Because that fear, while underlying for me on an otherwise inspiring day, is amplified for people of color, the LGBTQ community, Muslim Americans, and other black and brown people in this country, and will continue to be amplified if this new presidential administration is not constantly questioned. That fear, that simple, innate, deafening fear, kept me from bringing my son to a march is just as important for his future as it is for mine. Surrounded by a swollen sea of supporters and activists, I know fear did now win yesterday, but I also recognize the extent of that fear kept a mother from doing the most basic thing for her child: fighting for change and allowing her family to bear witness to it.

On Dec. 9, when a permit was secured for the Women's March on Washington by Tamika D. Mallory, Carmen Perez, and Linda Sarsour (all women of color), they knew what they were doing. On Jan. 21, 2017, they didn't change their minds. And for the next four years, I promise I won't change mine either. Where I go, my son goes. He'll know change, he'll know the fight, he'll know how to fight back against fear. He'll know it because he's pushed through it. As his mom, that's all I could ever ask for.