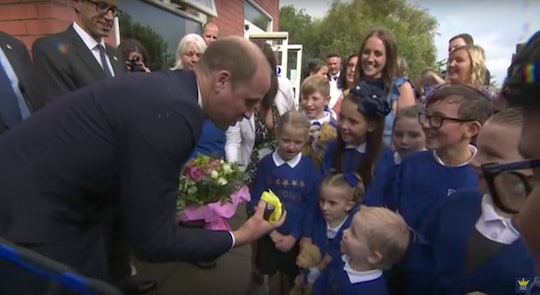 Britain's royals are more than accustomed to being showered with heartfelt praise and adulation wherever they go. And receiving gifts from members of their adoring kingdom is oftentimes just part of the deal. But a young admirer still managed to surprise (and probably impress) Prince William last week with a rather unusual gift of a tasty fruit. And this wasn't the random or half-baked idea of a school child, either. Honestly, the reason this 4-year-old boy gave Prince William an avocado is just too pure — and, actually, pretty darn practical too.

The little boy at the center of the avocado hubbub is Archie Weatherall, who presented the Duke of Cambridge with an avocado when the royal was visiting a swimming pool in Wallesey, Merseyside, Thursday, as The Daily Mail reported. Wrapped in a yellow bow, it stood out from the teddy bears other kids gave to the prince for his two young children — but for a very good reason. The Telegraph reported that the avocado's intended purpose is to help Prince William's wife, Kate Middleton, to combat the form of severe morning sickness plaguing her during her third pregnancy. Archie's mother, it turns out, is also in the throes of dealing with a debilitating case of hyperemesis gravidarum — commonly referred to as HG — just like the Duchess of Cambridge.

Prince William, of course, handled the initially baffling handing over of the fruit for his ill wife with grace and humor.

"Oh, Archie, you're too kind," he said at the time, according to a video of the moment captured by The Telegraph. "I've never been given an avocado before. That's really sweet of you.

An adult on the scene explained that Archie's mother is also pregnant, and William realized that he was not the intended recipient of the gift. "Catherine will love the avocado," he tells the boy. "That's very sweet. Thank you very much."

And it turns out that Archie and his mom are onto something when it comes to fighting the condition that ails the Duchess of Cambridge. The family happily announced that they are expecting their third child earlier this month, but revealed at the time that the news of the pregnancy had left them feeling "a bit anxious to start with."

That's because Middleton's history of HG, a condition characterized by intense nausea, vomiting, weight loss, and dehydration. Only between about 0.5 and 3 percent of pregnant women endure this incurable illness, according to NBC News, although exact numbers aren't available because it's a spectrum disorder that's largely undefined.

Just because HG can't be cured doesn't mean it can't be treated, though. Medications such as Dicleges, Phernegan, Ondansetron, and Reglan can do their part when prescribed by a doctor to mitigate symptoms. And another, non-pharmaceutical, possible tool to assuage the sickness? Yep, that would be Archie's avocado. Avocados' healthy dose of the vitamin B6 makes them easy for the body to absorb as well as helps to stave off nausea. And according to Parents magazine, the fiber, vitamins E and K, folate, and minerals — including potassium, iron, and magnesium — that avocados boast are all great for a pregnant body.

While it's unlikely that Middleton will actually eat the avocado that Archie gave her, perhaps she will try incorporating them into her diet, if she hasn't already. All of Britain would love to see her feeling like herself again, so Archie and his mom are definitely worthy of a little praise for doing what they can to get the Duchess of Cambridge back on her feet.

And once she's feeling better, Middleton can let us all know how that avocado worked out for her.