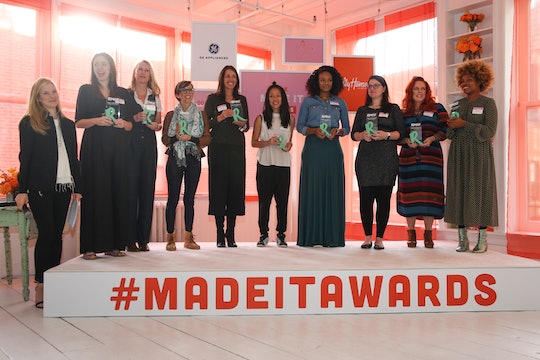 The Romper Made It Awards Celebrated Women Making It Happen

On Saturday, November 4, Romper hosted its first Made It Awards in New York City. The event, held in the penthouse at Gary's Loft in midtown, honored 10 incredible women who are in all stages of their entrepreneurial careers. Romper's mission is to be a site that speaks to mothers as people with complete, complex identities including but not limited to their role as moms, and the goal of the Made It Awards was to celebrate just that. The 10 honorees are women who have created things besides their kids: they've launched businesses and brands, written books, and started fashion and beauty lines.

The goal for the afternoon was to encourage and inspire women who have an idea to take that idea and develop it, launch it, and make the leap in transforming their concept into a business. The audience was full of women whose ideas were at all stages of development, which is why the breakout discussions, led by Romper editors, were so important. Throughout the afternoon, attendees were able to sit in on two of three panels: "Getting Off The Ground," which focused on transforming an idea into a business; "The Big Leap," which discussed moving business ideas past the "side hustle" phase; and "Two Full-Time Jobs," which centered around nurturing your kids and your business at the same time.

The Made It Awards offered other opportunities to attendees during the event. Through a social activation, one of the event's sponsors, GE Appliances, awarded a washer and dryer to attendee lucky attendee at the close of the afternoon. GE Appliances also provided a "one good thing" board for entrepreneurs to share advice with one another throughout the day.

Sally Hansen brought attendees the #HardAsNails panel, in which three honorees discussed the hard decisions they had to make to get to where they were today, in addition to what it means to be self-made, much like Sally Hansen founder herself, Sally Hansen. As panelist Irene Lee, Founder and Creative Director of Bash + Sass, said, "The hardest decision I’ve made so far was the decision to start."

Whatever idea you have, you have permission.

Susan Petersen, CEO and Founder of Freshly Picked, was the keynote speaker at the event, and first to take the stage to tell her story of launching a successful brand. In her speech, Petersen urged women in the audience to find their advantage and not wait for someone to give them the go-ahead. “Whatever idea you have, you have permission," Petersen told the audience during a hilarious and inspiring speech about how she took $200 and built it into a hugely-successful moccasins company for babies that now sells to Zappos and Nordstrom.

One of the themes that ran through each of the breakout discussions later in the afternoon was the passion that each honoree has for the idea that started all for them. No matter what stage their business or brand is at, the enthusiasm behind what started it was evident. At one point, Cara Via, of Halloween Holly, got choked up thinking about when a man told her that she was "just a mom," as if that rendered her incapable of also being an entrepreneur. It turns out, that was the statement that she needed to push her to make Halloween Holly bigger and better. Now, Halloween Holly sells across the country, far beyond its Maryland origins.

At the end of the event, before handing out Made It awards to each of the honorees, Sally Hansen awarded Pamela Barrios, beauty and skincare entrepreneur, with the Sally Hansen Hard As Nails grant for $5,000. The grant will help Barrios launch her skin care and makeup studio, Piel by Pamela.

The Made It Awards' mission is to combat the notion that women do not have lives beyond their children. "That's what today is about," Margaret Wheeler Johnson, Romper's Managing Editor, said to a room full of women with great ideas and the drive to make them happen. "Celebrating 10 women who have, while raising their children, made an idea of their very own a reality ... We are honoring them for their ingenuity, perseverance, and for prioritizing their ideas and goals, which, especially when you have kids, is so much easier said than done."

You can read more about each of the Made It Awards honorees here.

More Like This
The Most Magical Moments From Camp Romper 2022
Rainbow Baby Shower Ideas To Celebrate A Very Special Baby
Is There Parenting Advice To Take From ‘Strangers To Ourselves’?
31 Sweet & Savory Apple Recipes To Make This Fall