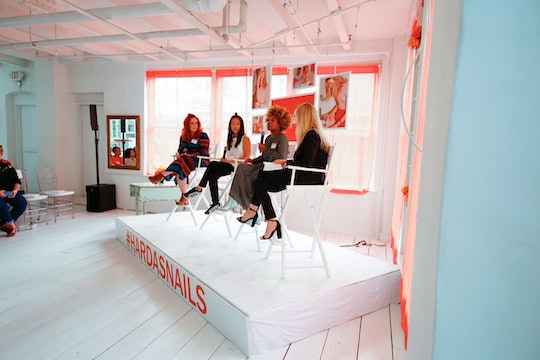 These Entrepreneur Moms "Cannot Care If You're Upset" With Them

How do you make your hardest decisions? That question is especially relevant when you’re a female entrepreneur, so it was especially relevant to the attendees of Romper’s 2017 Made It Awards, a day of conversations about how women with kids can make their big ideas a reality. A focal point of the day was a panel sponsored by Sally Hansen, named after the Sally Hansen strengthener with possibly the best product name ever: Hard As Nails.

The focus of the panel was specifically hard decisions, and how they’re essential to becoming self-made. It’s a question at the heart of the Sally Hansen brand because its founder (and the creator of that classic and very effective product) was also hard as nails when it came to launching and running a beauty empire.

The panel featured three out of 10 of Romper's Made It Award honorees: stylist and writer LaTonya Yvette, who has built a brand out of telling motherhood like it is (and showing how that is absolutely gorgeous); Irene Lee, founder of the minimalist, gender-neutral children’s clothing line Bash + Sass inspired by her own kids’ personalities; and Lane Huerta, the wonder woman behind Lovelane Designs, purveyors of kids costumes that really can be described as enchanting.

We talked about decision making from a lot of angles, and it turned into one of the most honest, interesting conversations about working motherhood I’ve been part of in a while. Lee said the hardest decision she’s made for her business was just to launch. "I had and still have intense fear — am I doing it the right way?” She still struggles with that internal fear: “Is this OK? Is this the right way?” is a frequent refrain in her mind. “Overcoming that initial fear just to begin was an insane win for me,” she said.

I had and still have intense fear — am I doing it the right way?

Huerta said her biggest decision was quitting her bartending job to go all in with Lovelane, “jumping off that cliff.” Looking back, she says the decision was "the single best decision [my] family unit has ever made.” For Yvette, the biggest decision was pivoting the focus of her blog, which she started and built on stories about and photos of her first child. When she was pregnant with her second, she said, “Something snapped.” She wanted to talk about motherhood, her experience and other women’s, not her kids. So that’s what she did.

In one of the most useful anecdotes of the whole 45 minutes (and that’s saying something, because almost everything these women said was useful), Huerta talked about a time when she made a decision that didn’t feel right for her, and how she listened to herself in the 11th hour. She had the opportunity to license one of her characters to a big company. She was so excited that someone wanted something she had created that she signed up. The paperwork was literally signed when she woke up in the middle of the night in a cold sweat, knowing it wasn’t right. The next day she called and backed out. It was the hardest phone call she’s ever made, but it’s made every hard call since easier. “It’s OK to say no,” she said.

I cannot care if you are upset with me. #noonecares.

And on the topic of unpopular decisions, Yvette had this to say: “I cannot care if you are upset with me.” And she has learned that it all blows over. Her unofficial mantra, she says, is “#noonecares.” Lee agreed. “I’m done with people-pleasing,” she said. "You don’t like it, that’s OK.”

Finally, the panelists talked about what success will look like to them, how they’ll know they've made it. Huerta said she wants more non-working time to spend with her family, and she’s not there yet. Lee said she’s living it now: when she was in the corporate world, her marriage suffered. “I wasn’t happy. I was a bitch when I was at home... There was lots of couples counseling,” she said. “Every decision I make not has to ensure that never happens again,” and Bass + Sass makes that possible. Yvette, who was one of five children raised by a single mom, says her definition of success is “making money while being available to my kids. It’s simple, but it means a lot to me.” And thanks to the choices she’s made, she actually gets to feel that success a lot.

These and all of the other very honest insights all three women shared helped kick off a day of conversations about how to make your business happen while raising your kids and how other women have done and are doing the same. The Sally Hansen panel underscored that whatever your product, the most important things you make, for your business and your family, are your decisions.

More Like This
How Do I Date As A Widow Without Guilt?
10 Fall Vegetables To Grow At Home
How Much Hair Loss Is Normal? 9 Signs You’re Losing Too Much Hair
How To Tell If Someone Is Lying To You: 34 Signs To Watch For