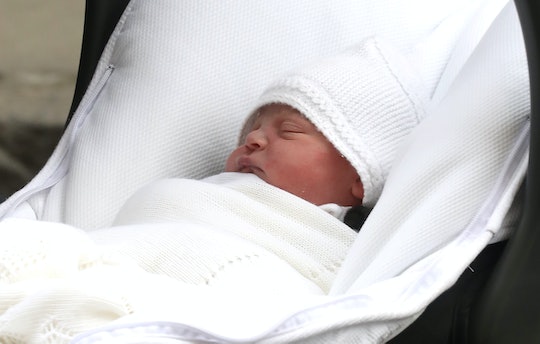 Hear ye! Hear ye! The Duke and Duchess of Cambridge, Prince William and Kate Middleton, welcomed a baby prince Monday, April 23! Even though we Americans fought a revolution to not have to deal with English royalty (for a good synopsis, see Hamilton) one cannot help but be charmed by the Prince and fair Duchess, to say nothing of their undeniably adorable children. If royalty rule by divine right (which, meh, but whatever), then their fate must be written in the stars. So what is the royal baby's star sign? He's a Taurus, but what does that mean in the context of their princely family?

First of all, royal baby #3 is in good company, birthday-wise. His great-grandmother, Queen Elizabeth, just celebrated her 92nd year on April 21; big sister Charlotte will be turning 3 on May 2; and fellow famous Englishman William Shakespeare shares a birthday with the little prince. All are Tauruses. Represented by a bull, Taurus is a sign marked by hard work, loyalty, patience, and level-headedness. Family is extremely important to this sign, along with all the traditions and routines that go with it... which is a good thing because if there's one thing English nobility love, it's traditions.

The prince will also likely be quite at home among all the opulence and grand parties that go with being royalty — Tauruses can be just a wee bit materialistic (and, if they're not careful, hedonistic). Fortunately, the House of Windsor's net worth is estimated to be in the hundreds of millions, so accommodating opulent tastes shouldn't be a problem. And yet while this sign likes the bling, they're just as happy out working with their hands — in the garden or the kitchen — with the ones they love.

Speaking of the ones they love, Taurus is one of those signs that gets along with just about everyone (yes, even the notoriously hard-to-get-along-with Scorpios!), but especially Cancers, Virgos, and Capricorns... which is great news!

Dad William and brother George are both Cancers and, interestingly, each falls on a cusp. William is on the cusp of Gemini and Cancer and George on Cancer and Leo... which, dare I suggest, may result in a touch of zodialogical sibling rivalry, since Taurus can be least compatible with Leo, but we'll just go ahead and assume George's Cancer-y qualities of compassion and love of family will overcome. Besides, the new prince actually has a Leo moon sign, so maybe they'll be more compatible than they'd have been otherwise? Also, his ascending sign is Cancer, so I'm thinking between all that (and his sister's shared sign of Taurus) sibling relations are going to be harmonious (even if there may be some tough times with a lot of emotional stubbornness that Cancers and Tauruses are known for).

Uncle Harry is a Virgo, a sign that gets along famously with Taurus since both signs are known to be practical, hard working, and have an eye for detail. When they team up there's no stopping them. Hopefully the new prince will join his uncle in the elder's philanthropic pursuits when he gets older. And since both Virgo and Taurus are Earth signs, both have a tendency to enjoy "the finer things" and enjoy keeping up lavish appearances. So I, for one, will not be shocked to find out it's Uncle Harry who's spoiling his loves-to-be-spoiled nephew.

Mom Kate is a Capricorn, the sign of the natural executive. As mothers, Capricorns have a tendency to run their families the way some people might run a business, finding ways to motivate everyone to achieve their full potential. As a Taurus, the new prince will likely respond well to this style of parenting. In fact, both signs share many of the same qualities, including a commitment to hard work, family, tradition, and, yes, a love of luxury because #EarthSignLife.

Of course, all of this is pure speculation... but it's fun speculation, right? We just can't help ourselves. Because even though we know that the Duke and Duchess are parents just like any of us, and that the zodiac is a fun, imprecise collection of archetypes that don't really dictate our personalities (much less our fates), there's a simple giddy pleasure in star-gazing, literally and figuratively.