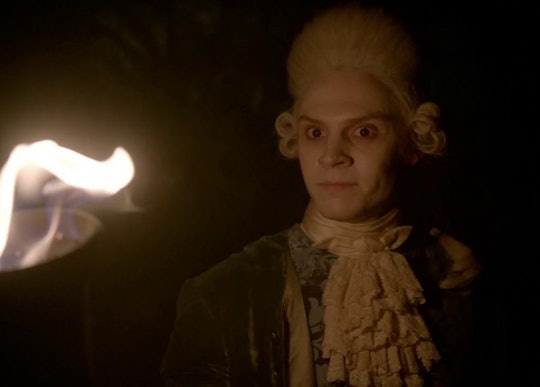 The Scariest 'American Horror Story: Roanoke' Reddit Theories That May Explain Some Things

By now, most of us know that Episode 6 of American Horror Story: Roanoke is going to be an all around, super shocking, game changer that will make everyone watching it want to utilize that rewind button on their DVRs. But before it all begins, and the second half of this very different and legitimately terrifying season starts, there are already a ton of scary American Horror Story Reddit theories. out there — some of which are actually pretty possible. Actually, there's not much that isn't possible at this point, especially since Ryan Murphy recently promised Entertainment Weekly in an interview that AHS: Roanoke will deliver a huge twist in Episode 6. So in that case, there isn't really any AHS theory that is too impossible or "out there" to consider.

We've seen the long reenactment of what Matt, Shelby, and Lee say happened at the farmhouse, but now that part of the season is over and, as we've seen in the Episode 6 promo, the camera work is going to get a little different. Instead of the documentary-style TV show that we once had, it looks like things will be on the move, a la a ghost hunting special, that shows us not only some of the crew, but will also likely give us more insight to the truth behind the original story. And there are already so many terrifying ideas as to where the show will take us now.

There Will Be Aliens

Honestly, ever since Shelby got lost in the woods at the beginning of the season and the ground began to pulse beneath her, this seemed like a possibility. But the effect never happened again and the idea was never even brought up, so it was easy to forget. Redditor KalebAT brought up the possibility of an alien theory on AHS this season, since there are plenty of theories about aliens being the cause for the original disappearance of the Lost Colony.

Of course according to the lore presented this season, that's not what happened to the English settlers at all, but if AHS is known for anything, it's adding lots of different scary elements into one packed season, so don't be too quick to shoot that one down.

On Reddit, KenBanner21 posted a theory predicting that those who are telling the story are already dead, but maybe not even knowing it yet. They refer back to Season 1 of AHS and how it's explained that a lot of the time, ghosts don't even realize they're dead. Kinda puts Shelby's dream of the Butcher coming to the hotel and murdering her into a different perspective, right? KenBanner21 goes on to explain that maybe Shelby isn't having a recurring nightmare, but is instead remembering how she was killed by the Butcher. We only know what Lee, Shelby, and Matt remember to be true, but not necessarily what is accurate.

Matt And Shelby Are Possessed

This is a little more hopeful than the theory that Matt and Shelby are dead, but it still entails them going back to the farmhouse. Redditor funky-al posted a theory about Matt and Shelby being possessed by either Scathach or the Butcher and that they've been sent out in order to bring back sacrifices for the land — something they need on a regular basis. This is similar to what the Polk family was doing, but in this case, Matt and Shelby would actually be possessed and not in control of their own actions, deal or otherwise.

They Made A Deal

If they aren't possessed, then maybe they did make some kind of deal to ensure their safety. On Reddit, ckstarling theorized that Matt and Shelby made some kind of deal with the Butcher in order to get out alive and that their plan is to bring back the entire crew of My Roanoke Nightmare to the land. The only kicker is that they'll all likely be killed at the hands of the Butcher and the only thing that will be left behind will be a tape, much like Elias's, for the next owners to eventually watch and learn nothing from.

We've Been Given The Amityville Treatment

In The Amityville Horror, a family that moves into a creepy house with the eye-like windows gets haunted by the ghosts of the family who lived there before them. But in real life, there was a lot of speculation about the Lutzes and the real reasons they moved out of their house, like being far behind on the mortgage and so much in debt that they would try to use the proceeds from telling their story in order to break even.

So to that tune, Redditor PatrickRsGhost posted that not only are the two windows repeatedly shown in the Roanoke farmhouse that resemble the famed Amityville home, but Shelby and Matt have said time and again how much they'd lose financially if they just left the house. So it could very well be that, in order to make back some of their money, they were paid by the crew behind My Roanoke Nightmare to fabricate their story.

Matt Never Woke Up From His Coma

At the very beginning of the season, we learned about Matt and Shelby's past together, which involved a gang of kids beating up Matt and putting him into a short coma. When he woke up with Shelby by his bed, they decided to move across country to somewhere safer. But according to a theory by Reddit user Ey3z0nF1rE, Matt never woke up from his coma at all.

Among the evidence Ey3zonF1rE presents is the possibility that, since Matt was beaten up, he could have lost teeth, which would explain the raining teeth Shelby saw during the reenactment. And the last thing he saw was the movie titled Crimson Harvest on the sign in front of them, which could have led him to come up with the blood moon story while in his coma. And maybe he's constantly hearing Shelby's now-infamous call: "MAAAATT" because that's what he heard right before being knocked unconscious.

Flora Has Been Bad All Along

Here's an idea that would really catch us off guard. Redditor witch_cvlt came up with the theory that Flora is actually bad and has been all along. The theory states that not only did Flora kill her sister Emily years ago (which is why Lee never really looked for her), but also that Flora helped kill Mason in some way. The theory also points out that Flora was gone for so long with the Butcher, yet she was never harmed. Why was that? Maybe because they've established some sort of alliance.

In most cases, AHS theories come with a heavy grain of salt and require you to put on those tinfoil hats to take them in, but Murphy himself has made it clear that crazy things are coming. So we have every right to not only figure out the craziest AHS theories, but the scariest ones too.