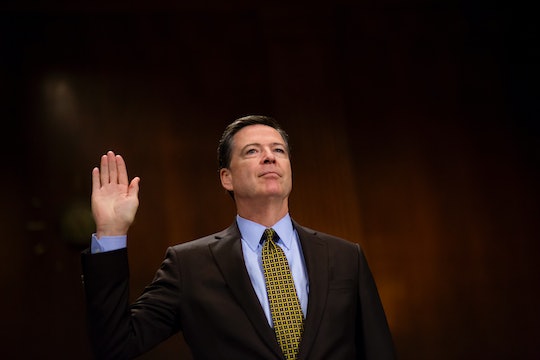 One day prior to his official testimony in front of the Senate Intelligence Committee, James Comey's opening statement was released to the public, outlining a number of conversations he had with Donald Trump from January until his firing in early May. Out of the seven-page document released on Wednesday, however, one particularly strange line in Comey's statement stood out. According to Comey, in a March 30, 2017 phone call with Trump, the president allegedly told the then-FBI director that "he had nothing to do with Russia, had not been involved with hookers in Russia, and had always assumed he was being recorded when in Russia." The president also asked Comey to help lift "the cloud" of the the FBI's investigation into the Trump campaign's alleged interactions with Russian officials leading up to and following the 2016 election.

Trump stating that he had never been involved with "hookers in Russia" is (despite its derogatory language) a reference to a dossier that was released in late 2016, reportedly compiled by British intelligence officer Christopher Steele. In that dossier, there were allegations that Trump had associated in some capacity with sex workers at the Moscow Ritz-Carlton Hotel. Trump has denied the encounter in the past. (Romper has reached out to the White House for comment on Comey's statements and is awaiting a response.)

It's tempting to simply snicker at the fact that Trump was concerned about those allegations, but Comey's opening statement is important for other reasons as well.

Comey's opening statement provides evidence that the then-FBI director was very uncomfortable around Trump; In one instance, Comey writes that, before his initial meeting with the president, he asked Attorney General Jeff Sessions not to leave him alone with the president, although Sessions seemingly declined to respond. There is also a description of a dinner to which Trump invited Comey, where Comey had expected to be dining with other people. Instead, the two dined alone in the Green Room at the White House, where, according to Comey, the president asked the then FBI director for "honest loyalty."

As Comey wrote in his statement:

As I wrote in the memo I created immediately after the dinner, it is possible we understood the phrase “honest loyalty” differently, but I decided it wouldn’t be productive to push it further. The term – honest loyalty – had helped end a very awkward conversation and my explanations had made clear what he should expect.

Comey also claimed that he decided after an initial meeting with the president at Trump Tower in January that he would document every interaction with Trump in unclassified memos. The first one he typed in an FBI vehicle just after leaving Trump. "This had not been my practice in the past," he explained.

While it's normal for an FBI agent to be trained to keep memos and documents of conversations, that sentence implies that Comey might have sensed something — though he doesn't say so in his statement — unorthodox in the conversations he was having with the president and that they should be recorded in some manner for later reference.

At this point, anything Trump might have allegedly done (or not done) in a Moscow hotel is no big deal. What's more damning is that an FBI director felt uncomfortable around a president and that the president was allegedly blurring lines between branches of government. This is definitely only the beginning — Thursday's testimony will likely bring more surprises.

More Like This
Kate Middleton's Brother Paid Tribute To Queen Elizabeth With His New Puppy's Name
Kim Kardashian Stars In Hilarious House Of The Dragon Parody, The Targashians
Olivia Wilde Got Candid About Co-Parenting Jason Sudeikis & Life As A Single Mom
15 Awesome Movies For Families To Watch During Hispanic Heritage Month