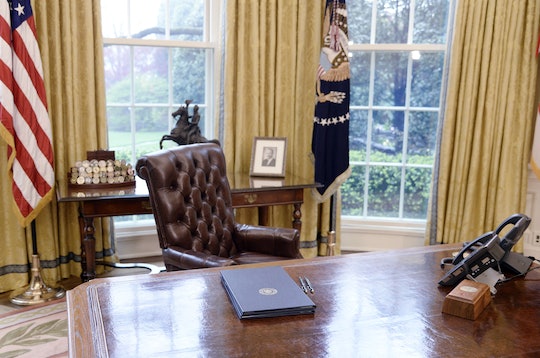 Trump Campaign Adviser May Have Been Monitored By FBI

A new report on Tuesday appeared to confirm that one of President Donald Trump's campaign associates, Carter Page, was being monitored by the FBI last year. According to CNN, the FBI was reportedly monitoring Page's communications while he was serving as an adviser to Trump on national security. This monitoring was allegedly connected to the FBI's investigation of possible ties between Trump's campaign and Russia. Romper's request for comment from the Department of Justice regarding the investigation and monitoring was not immediately returned.

UPDATE: Justice Department spokespersons declined to comment on the report, in an email to Romper.

EARLIER: Allegedly the FBI director James Comey used the now well-know Trump dossier to get a warrant from the secret court that controls the Foreign Intelligence Surveillance Act (FISA). If they did use the dossier to get the warrant to monitor Page's communications, a source close to the investigation told CNN, that means that the FBI had reportedly corroborated whatever intelligence was in the Trump dossier.

This is the dossier that made headlines late last year that was compiled by British intelligence agent Christopher Steele, including memos about Trump and members of his campaign team's interactions with Russia during the 2016 campaign. The memos allege specifically that Page met with top Kremlin officials to talk about sanctions and Russia's alleged role in the 2016 election as an official Trump adviser.

The FBI reportedly was tipped off to Page as far back as 2013, when he met with a Russian spy who was later prosecuted for trying to turn Page into a leaker, though Page has always alleged that he had no idea the man he was talking to was working for the Russian government. Last summer, Page allegedly went to Russia to criticize the current relationship between America and Russia. Again, Page denies any wrongdoing and maintains that he never acted in an official capacity during his visit to the Kremlin.

However, around the time of the trip, Trump said in a handful of interviews that he had assembled a capable national security team, and named Carter Page as one of those great minds advising him, though he was never on the campaign payroll.

Page alleges that it's the Obama administration that is trying to make it look like he, or any member of Trump's inner circle, has (or had) nefarious ties to Russia. He told CNN in a statement about the new report:

I look forward to the Privacy Act of 1974 lawsuit that I plan to file in response to the civil rights violations by Obama administration appointees last year. The discovery process will be of great value to the United States, as our nation hears testimony from them under oath, and we receive disclosure of the documents which show what exactly was done in 2016.

However, if the report that the FBI obtained a warrant to monitor Page, they would have had to present probably cause to do so, so in a way, right now it's simply a case of he said-they said. One thing is very clear, though. This is definitely not the last that the American people will hear about the FBI's investigation into the Trump campaign's dealings, if there were any at all, with Russia.