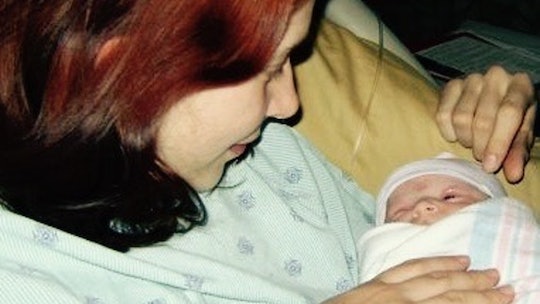 The Tiny Thing Every Mother Should Do For Her Baby Daughter

As a feminist, I always wanted to have a daughter so I could raise her to be a total badass. So when the ultrasound tech told me that the fetus I was growing had a vulva, I was overjoyed. But in the nine years since that moment, I've learned that when it comes to babies, gender and gender roles really don't apply. And if you want equality to be a thing, there's a tiny thing you can do for your baby daughter that will not only change her life, but potentially change the lives of others: don't treat her any differently than you would a baby son.

Now, I know that some of you are probably rolling your eyes at the idea of "gender neutral" parenting. And hey, that's fair. We all have to figure out for ourselves, and our families, what works best for us. But stop and ask yourself why we treat babies differently based on their assigned gender or physical anatomy. Is it important that we mark babies in pink or blue to indicate how we want them to be treated? Should we treat babies differently, based on their gender? Of course not. Besides, gender is a social construct. As a mom to daughters and sons, I have learned over the years that gender roles are often ridiculous, and can create harmful stereotypes about who our kids are and who they'll become.

These biases run deep, though, and as a society we have so much work to do if we want to undo the damage of placing babies in gendered boxes from the moment they're born. You might not think it matters, but treating children differently based on gender can have a lasting impact. A recent BBC experiment showed that people play differently with "girl" babies than they do with "boy" babies — introducing them to dolls and calling them pretty, versus introducing toys that foster spatial ability. It seems subtle, but playing with these toys is important for brain development. One study published in the journal Child Development actually showed that the differences in spatial ability that scientists used to attribute to gender disappeared with eight weeks of practice. Whoa.

This also might even help explain why boys and girls tend to opt for different career paths. And while more girls are pursuing STEM fields than ever before, according to a American Association of University Women report, only 12 percent of engineers are women and the number of women in computing fields has dropped from 35 percent to 26 percent since 1990. In contrast, and according to Monster.com, more women pursue so-called "caring professions" — like child care, teaching, social work, and nursing — than men.

Should we treat babies differently, based on their gender? Of course not.

And even if girls go to school for science, math, or engineering, they may be treated differently in the workplace. According to the AAUW report, research shows that scientists were more likely to hire a male candidate than a female candidate with the exact same résumé, and both male and female scientists are more likely to offer the male candidate a higher salary. Another study showed that for math positions, employers hired lower performing men over higher performing women. These same biases cause girls to underestimate their own abilities, too, and make them less likely to study the aforementioned subjects in school. Yikes.

According to Stanford Professor Carol Dweck, we even praise girls differently from boys — for achievement versus effort — and as a result, girls are more likely to quit if they can't do something perfectly, whereas boys are more likely to continue trying. Girls are also are more likely to feel pressured to be perfect, which can have a serious negative impact on their self-esteem and mental health. I often think about a quote from writer Erin McKean, "Prettiness is not a rent you pay for occupying a space marked 'female.'" I have to admit that I have a hard time not complimenting my daughters' looks, because my girls are pretty. But when we constantly tell our girls they are pretty, but don't tell them how smart, brave, capable, hard-working, or creative they are, we send the wrong message.

How can we teach our kids that gender doesn't matter if we start treating them differently from the minute they are born? The answer: we can't. In fact, we, as parents, play a big part in a child's social and cognitive development, and actually teach them gender roles. For instance, Psychologist Campbell Leaper of the University of California found that girls are more likely to be polite and agreeable than boys, even in situations where they disagree and probably should speak up. This makes me think about all of the guys I kissed over the years, all because I didn't want to hurt their feelings. I don't want that for my daughter. Over time, this socialization impacts their confidence and assertiveness. Not surprisingly, a huge meta-analysis by Leaper showed that women are more likely than men to use tentative language, like adding qualifiers, or asking questions, which can have lasting impact in relationships and the workplace.

In the ongoing fight for equality, we'd be better off if we just treated babies like babies, and not 'girl' babies or 'boy' babies.

Now don't get me wrong. I'm not going to stop my daughter from pursuing an interest or hobby just because it's typically associated with being "girly." Considering how much I like lipstick, that would be hypocritical at best. But I must admit that I was a bit disappointed when she asked to attend cheerleading camp over coding camp. Still, I let her get her cheer on, because in addition to not wanting to prevent her from exploring anything she wants, I also don't want to teach her that "being a girl" or being feminine are bad things.

As a culture, we'd be better off if we consistently let our kids tell us who they are, instead of attempting to mold them into who we expect or want them to be. In the ongoing fight for equality, we'd be better off if we just treated babies like babies, and not "girl" babies or "boy" babies. It's hard, though, because people seem to be so set on knowing if your baby is a "pretty girl" or a "tough boy." It's sort of gross when you think about it. I mean, people are literally asking you about your baby's genitals, because they think genitals should determine how human beings are treated. Honestly, the next time someone asks me about my baby's gender, I'm going to say, "A baby. They are definitely a baby."

Gender is not as a simple as a binary, where girls like pink and boys like blue or girls are quiet and "nice" and boys are rowdy and destructive. Gender is a social construct, and as parents, we play an important part in letting our kids figure out where they belong on the gender spectrum (or whether they have a gender at all), without imposing harmful gender roles on them in the process. And that starts at the very beginning of our children's lives, by not forcing gender on a newborn. It's such a tiny thing, but it could make a huge impact.