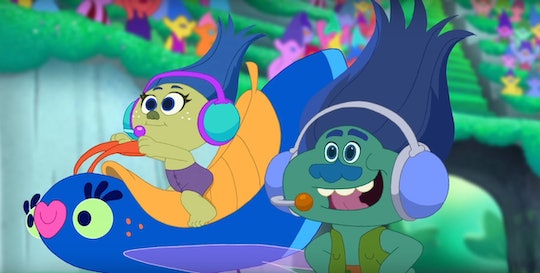 The 'Trolls: The Beat Goes On' Season 7 Trailer Shows How Trolls Solve Problems

The Trolls movie sequel hasn't yet been released in theaters, but that doesn't mean the Netflix animated series based on the movie franchise has to slow down. Trolls: The Beat Goes On premiered on the streaming platform in January 2018 and Season 7 drops on Aug. 27. Just like the trolls themselves, there is no slowing this show down and the Trolls: The Beat Goes On Season 7 trailer is full of the same glitter, confetti, and troll customs young fans have come to expect.

The trailer doesn't give much away in terms of what will happen this season. It does, however, show another side of Branch, who seems to open up to Poppy and the rest of their troll friends more and more each season. The trailer begins with another character premiering a recorded song by Branch himself, who once hated anything that had to do with music, fun, and glitter. He was basically the Ebeneezer Scrooge of trolls and slowly, he has come out of his brooding shell to be part of the crew.

The Trolls: The Beat Goes On trailer for Season 7 also shows how the trolls settle their fights. Spoiler alert — apparentlyh it involves glitter fights and tickle matches. But I would expect nothing less from the animated series that features glitter farts young fans can't get enough of.

Because Season 7 will be released well before the Trolls movie sequel, chances are, it won't include any details from the upcoming movie. So while Trolls World Tour deals with the trolls meeting different troll factions from around the world who make different music genres, Season 7 of Trolls: The Beat Goes On is still working with its own original storylines.

When the animated series first began, it did pick up where the first movie left off, with Poppy as the queen of the trolls and Branch just a tad less grumpy than he was at the start of the Trolls movie. Ahead of the series premiere in 2018, Skylar Astin, who voices Branch for the series, told KidzWorld.com that the idea was for the show to dig deeper into who the Trolls characters are rather than continue the tropes of the first movie.

"There are so many new stories to tell and since we don’t want to be redundant, we’re not going to keep telling stories where Poppy is being encouraging and Branch is being discouraging," Astin said at the time. "We get to actually have a little bit of role reversal sometimes, where Branch will be a little more optimistic and driving the story more and have his own reasons to go on his own journey and have to coax Poppy and vice versa."

Past seasons of Trolls: The Beat Goes On have shown the beloved troll characters in various predicaments, from putting on a talent show to being stuck on a deserted island. But most of the episodes reinforce underlying themes of friendship and forgiveness, which are also at the heart of the Trolls movies.

Since the show dropped on Netflix in 2018, the characters have been given a chance to expand beyond the short frame of time the first movie provided. But more than that, Trolls: The Beat Goes On has enabled fans to stay engaged with the characters and the confetti-filled world of these characters ahead of another Trolls movie. And what kid is going to say no to more Trolls?

Trolls: The Beat Goes On Season 7 premieres on Netflix on Aug. 27.