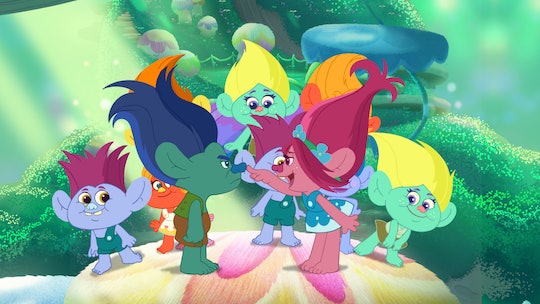 This Clip From 'Trolls: The Beat Goes On' Will Get You Excited For Season 6

If your kids have already gone through January’s installment of Netflix’s Trolls: The Beat Goes On!, you won’t have to see all of those episodes on repeat for much longer. Season 6 premieres on the streaming platform in April and that means a handful of new episodes to keep the Trolls obsession alive in the hearts of kids and adults alike. But until then, this exclusive Trolls clip will get you in the mood for more brightly colored song and dance numbers. Because at its core, isn't that what Trolls is all about?

In the clip, Poppy leads the rest of the trolls on Pitch Day as they each sing about their ideas for a new holiday. As if Tickle Day, Glitterpalooza, and Balloon Squeal Day weren't enough for the trolls to celebrate throughout the year, they are gearing up for a new celebration in the new season. Anything for another opportunity to sing, dance, and show off glittery troll butts, I guess.

The clip from Trolls: The Beat Goes On! Season 6 shows Branch and Creek tied together by the hair in an attempt made by Poppy for the two of them to spend more time together. After some initial fighting, they realize that instead of being angry with each other, they should be upset with Poppy. And in some weird and twisted way, the foes bond over their shared annoyance with the troll who brought them together with the friendship hair bow. They even break into song and dance to show their newfound bond.

Besides showing off another side to Branch, who is still typically the grumpiest troll of all, the Trolls clip gives viewers a chance to see more characters than just the standard main cast fans already got to know in the movie. I’m sure most young fans would be fine if Poppy, Branch, Creek, Biggie, and Guy Diamond were the only focus of the show, but all of the clever characters add something extra. When Poppy shows up with more Trolls friends in tow to check on Creek and Branch, it shows that the series is all about bringing in new fun characters for young viewers to get to know. And if it means more opportunities for impromptu song and dance numbers, then it will happen.

Some of the new characters from the series might also be part of the Trolls sequel, Trolls World Tour, when it premieres on April 17, 2020. Although there hasn’t been a trailer for the next installment in the movie franchise just yet, the Trolls characters have been kept alive with multiple seasons of the animated series on Netflix per year, so I don't see fans, however young they might be, forgetting about them anytime soon. Which was honestly probably part of the reason for making the series to go along with the events of the movies.

Last June, SlashFilm reported that the new Trolls movie would bring a new threat to Poppy and the other trolls and that they would have to venture out of their surroundings to bring other trolls together. According to the official synopsis:

"Continuing where the first film left off, it’s all glitter and happiness in Troll Town until Queen Poppy and Branch make a surprising discovery — there are other troll worlds beyond their own, each defined by a different genre of music. When a mysterious threat puts all the Trolls across the land in danger, Poppy, Branch, and their band of friends must embark on an epic quest through unfamiliar terrain to do the impossible: create harmony among the diverse trolls to unite them against certain doom."