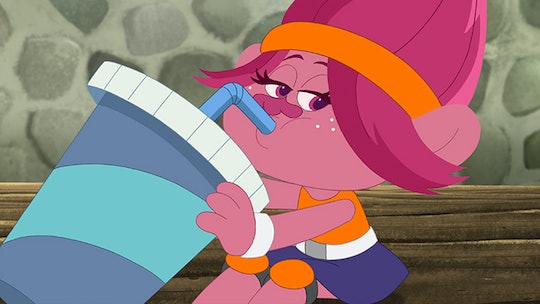 I Am So Here For The 'Trolls: The Beat Goes On' Season 6 Trailer

It's time to rise and sparkle because Season 6 of Trolls: The Beat Goes On is premiering on Apr. 9, and there's plenty of glitter to go around. After a solid lineup of animated series, such as She-Ra and the Princesses of Power and The Epic Tales of Captain Underpants, Netflix and Dreamworks Television are at it again with the Trolls: The Beat Goes On Season 6 trailer — and yes, there's enough excitement from the 79-second promo to last until the show's debut on Netflix.

The series continues where the 2016 film, Trolls, left off. And while the Season 1 premiere of Trolls: The Beat Goes On first aired in Jan. 2018, Netflix has since released five short seasons of the series in the past year. Following a widely successful run, the fiery pink-haired Queen Poppy, Branch, and the rest of their pals in Troll Village, return for a sixth season, and fans can expect a number of fantastic adventures ahead.

So what's up next? In the trailer just released, it's clear that the sixth season of Trolls: The Beat Goes On will be filled with enough dancing — and glitter — to keep your kids engaged and entertained for brief 20-minute intervals.

In the trailer for the upcoming season, fans should know that there's going to be a lot of dancing within Season 6 of Trolls: The Beat Goes On — or as Guy Diamond puts it, an emergency dance party. The mastermind of all the dancing? Hilariously enough, Biggie. The new season also promises to show the Trolls attempt to out-gift the gift queen, Poppy. Branch and Creek also find themselves stuck together. The streaming giant also added that fans will get to learn more about Sky Toronto.

The trailer also get's a little bit real for adults. "I came to the only person who can help," Poppy tells Branch in the trailer. While Branch expresses how flattered he is for Poppy's actions, she adds, "Who else can I count on to be so cold and emotionless?" Ouch. However, Branch takes the backhanded compliment anyway and the Trolls Season 6 trailer skips on to the next thing. Is this adulthood? The answer is yes.

Netflix and Dreamworks have yet to confirm how many episodes are in Season 6 of Trolls: The Beat Goes On. However, judging from the previous five seasons, which consisted of six 23-minute episodes, fans can likely expect the same episode count for Season 6.

As for Season 7, the news of a cancellation or renewal of Trolls: The Beat Goes On is still too early to tell, considering the release date of Season 6 is just around the corner. So, fans will just have to wait and see.

While the trailer might briefly touch on a bit of adulthood cynicism, don't worry. The new season of Trolls: The Beat Goes On will surely be jam packed with bright colors, fun adventures, and — of course — a ton of glitter farting, that will surely bring a smile to children — and maybe even adults — of all ages.

Season 6 of Trolls: The Beat Goes On! premieres on Netflix Tuesday, Apr. 9.