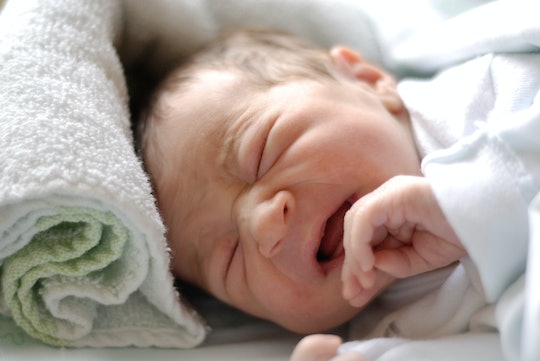 If the thought of strategic planning has you bored to tears, I don't blame you. But there's one strategic plan that every American needs to perk up and pay attention to pronto — because it could influence U.S. health policy for years to come, and in ways that could substantially impact anyone who cares about their reproductive health. The U.S. Department of Health and Human Services — read: the U.S. government — wants to define that life begins at conception in its strategic plan for the next four years. It is a radical departure from past U.S. health policy guidance by embracing unnecessary anti-choice language in lieu of medically scientific fact.

Update: A spokesperson for HHS told Romper via email that the strategic plan is a "draft document that was provided for public comment. The purpose for public comment is to obtain feedback that will assist in refining and strengthening the plan." The spokesperson did not respond to Romper's question on why this specific definition was included in its new strategic plan.

First, let's back up for a second. As with every new White House administration, HHS issues a new four-year strategic plan that outlines the incoming administration's key public health priorities. With a new president comes a new strategic plan, and President Donald Trump's record on reproductive health policy is pretty terrible. From reinstating the Global Gag rule to rescinding the birth control mandate in the Affordable Care Act, the Trump administration has fallen just about as lock and step as it can with the largely religiously-driven anti-choice movement — despite that pesky "separation of church and state" thing.

So, while it's not entirely surprising that the HHS strategic plan would define that life is "beginning at conception," the implications for U.S. health policy are disastrous for Americans.

Within the 65-page document (which you can read at the HHS website), there are a total of seven statements that are the most alarming with regard to women's reproductive choice and health. But it's the first mentions of "conception" and the "unborn" that cozy up entirely too closely to anti-choice rhetoric, especially as it relates to personhood. The first line of the section on HHS "Organizational Structure" reads as follows:

HHS accomplishes its mission through programs and initiatives that cover a wide spectrum of activities, serving and protecting Americans at every stage of life, beginning at conception.

For the first time in the history of HHS strategic plans, the White House has decided to take a policy-influencing stance with a statement that has zero basis or support in medical science. Claiming that "life begins at conception" is a belief — not a fact.

Kate Weldon LeBlanc is the Executive Director of RESOLVE New England, an infertility patient support, education, and advocacy non-profit organization. Anti-choice policy also impacts infertility patients who need medical intervention to build their families, even though the policy is only aimed at preventing abortions. It's the cruel irony of the personhood movement: It dubs itself "pro-life" but its agenda prevents the creation of families.

LeBlanc tells Romper it's not entirely clear how much power strategic plans actually wield and reiterated these documents don't create policy or change the law. "Even under presidents of both parties, this type of language hasn't previously been in the [HHS] strategic plan," LeBlanc says, adding that both Bush administrations didn't even go this far. "It's entirely unnecessary and represents a concerning theoretical shift to put such language in a document like this." Roe v. Wade is still safe despite the HHS strategic plan, but it's indicative of an administration that's become increasingly more anti-choice in its public policies.

So what's a concerned citizen to do? The 2018-2022 HHS Strategic Plan is still only in draft form and is currently accepting public commentary through Friday, Oct. 27. The time to act is now. You can email your comments to the HHS at HHSPlan@hhs.gov, or fax your comments 202-690-5882. You should also call your U.S. representative and senators and tell them that including such vague language defining that life begins at conception is not just bad health science, it's bad public health policy.