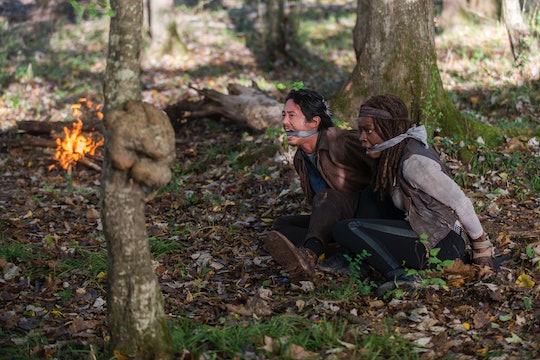 'The Walking Dead' Season 7 Glenn Theories Are Not Very Comforting

Fans of AMC's The Walking Dead are in for a long six months until the October 11 premiere of Season 7. While some choose to just put the series out of mind until the fall, and others are content to watch the companion series Fear the Walking Dead during hiatus, many just can't let go. Who got Lucilled? Are they dead? Is it Glenn?! It's no surprise that fans have begun churning out Glenn theories for The Walking Dead Season 7, but be forewarned: they're all pretty depressing.

What we know for a fact is that in the Season 6 finale, Negan, the leader of the Survivors, "beat the hell" out of one of our gang with his barbed wire-wrapped baseball bat, Lucille. The rest were forced to watch, and while Negan told them that they were allowed to breathe, blink, or cry, if anyone moved or spoke, he instructed his gang to "cut [Carl's] other eye out and feed it to his father." OK, so that probably means that Carl and Rick aren't the ones getting beaten in the P.O.V. shot at the end of the episode. Unfortunately, almost everyone agrees that it's father-to-be and fan favorite Glenn.

This is your official warning that if you're afraid of even minor SPOILERS, it's time to click away. As many fans know, in the comic books, Glenn was indeed dispatched by Lucille, which some found comforting when he was presumed dead after getting knocked off that dumpster by Nicholas back in October; if Negan's supposed to kill Glenn, then the walkers couldn't have! That was great for a few months, but now we're faced with his possible demise yet again.

But there's more evidence than just the comic books; Reddit user Hunter2346 points to a couple moments of foreshadowing: Glenn had a previous run-in with a baseball bat at Terminus during Season 5. And remember when the gang raided the Saviors' compound, and Glenn came across those photos of bodies with bashed-in faces? Executive producer/director/special effects makeup artist/my hero Greg Nicotero confirmed to ComicBook.com that a bat was, indeed, responsible: "These people relish in a perverse way in beating people's heads in with a baseball bat and take photos of it and put those photos on their wall." Could it just be a coincidence that Glenn's the one who discovered those photos? Bats sure do seem to follow Glenn around.

Another Reddit user, SmileyKnox, has an artsy reason for why Glenn might be at the other end of that bat. Earlier in the episode, fans see the point of view of the Saviors' prisoners inside a van (remember the panting and the bullet holes?). Later, it's revealed that Daryl, Glenn, Michonne, and Rosita were in the van. Were we seeing one specific person's point of view? The same person who was later beaten with the bat? That would make it a one-in-four chance that it was Glenn's eyes were were seeing through. Daryl and Michonne are too iconic to kill, and Rosita, honestly, isn't interesting enough. It's got to be a big deal, but not so big of a deal that fans would stop watching. Ergo, Glenn.

There's also been a lot of talk about Negan's line that his victim took the first hit "like a champ." Negan seemed surprised and impressed that that victim got up again after that first hit. So clearly it's not somebody who looks like they'd take a hit like a champ (such as Michonne or Abraham), and it's not somebody who probably couldn't have gotten up again (like the pregnant and ill Maggie, or the shot-and-bloodied Daryl). Sure, it could be Eugene, but it could just as easily be Glenn, who's not the toughest-looking character on the show (not that he isn't tough!), and who we last saw crying over the fate of his pregnant wife.

Another idea to consider is that Glenn's near-death in October may have been a "test death" to gauge fans' reactions. Redditor elpablo posits that the plan was always to kill Glenn, but fans reacted so negatively, the producers decided to keep him alive for the rest of the season to get viewers hooked on Season 7. OK, maybe that's a little out there, but it's certainly not impossible.

So, are there any credible theories out there where Glenn survives? Yeah, but they all involve killing Maggie. Some say that Glenn discovering the photos of the previous bat victims was foreshadowing him witnessing Maggie's death by the same weapon. Others argue that killing the sick, pregnant Maggie in front of her "family," after they went to such lengths to get her medical care, would be the best way to prove that Negan is the most despicable villain the series has even seen. Either way, things aren't looking great for the Rhee-Greene family; if that baby survives, it might end up being raised by a single mom. At least Father Gabriel is always up for babysitting.