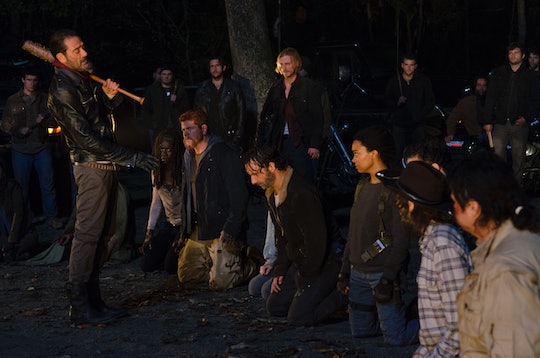 The sixth season of The Walking Dead certainly wasn't shy about toying with the emotions of its fans in favor of a big cliffhanger. The uncertainty of the season finale has left viewers with a long wait during which they can debate what the outcome of Negan's big bat swing will be, and fans are already revving up with theories and speculation. A large portion of the audience has been left feeling tricked and manipulated by the way the finale played out, but let's be real: it's not going to stop anyone from tuning in next season to find out what happened. So, what are some of The Walking Dead Season 7 theories that fans are already thinking about?

While we don't know exactly when the new season is set to premiere, there have been some guesses. Based on the show's scheduling for the past few years, fans would be looking at a premiere in early October, giving us six whole months in which to hope for the best and fear for the worst. Theories will likely grow and change as the weeks pass and fans have more time to hyper-analyze every little detail, but until then here are five theories that might just come true.

1. We'll Have To Wait To Find Out Who Got "Lucilled"

Everyone is understandably a little cranky about the show's reliance on cliffhangers. When it looked like Glenn had been ripped apart by zombies early in the season, audiences had to wait three entire episodes to find out if he was really gone. Then the finale pulled the biggest cliffhanger yet. Some fans are wondering (only half-sarcastically) if they won't even answer the question about who died until the mid-season finale of season seven. Reddit user jaggedllama summed it up nicely: "Wouldn't be surprised if it was the mid season finale when we find out. Cue eight episodes about the Kingdom, Negan origins story, stuff about the saviors and people at Alexandria THEN we find out at the end of the mid season finale and need to wait another 6 months to find out it was Aaron."

It'd be harsh, but I wouldn't put it past The Walking Dead.

2. The Death Won't Be A Major Character

A large part of what makes Negan so intimating in the comics (you know, aside from the sizable forces at his command and the whole bat thing) is that in his first appearance he takes out a main character without blinking. However, the line-up in the finale was a mix of beloved, important characters and lesser characters that, while awesome, fan might not miss as much. Viewers are wondering if The Walking Dead will go for the less shocking move of killing one of them (namely, Rosita, Sasha, Aaron, or even Eugene) instead of sacrificing a more important character.

Reddit user idontlikeflamingos theorized that "The only reason a cliffhanger might make sense is if the death is not impactful at all so there's not much to speculate after." Basically, the show used up all the shock value on the cliffhanger itself, so whoever the victim is might be less important.

Glenn is the character who Negan kills the comics and his death has been teased so long on the show that it could practically be a meme at this point. However, the fact that everyone is expecting it might just mean Glenn is safe after all — the show might go for the curveball that audiences don't see coming. The series also has a history of repurposing comic book deaths using different characters (Denise recently got the death that Abraham had in the comics), so it wouldn't be a huge surprise if they swapped out Glenn for someone else.

4. The Kingdom Will Play A Big Role

One mystery left hanging after the finale involved the unknown men who approached Carol and Morgan on horseback. They wore distinctive padding and they seemed trustworthy, offering help immediately instead of, you know, bludgeoning anyone to death. While many viewers were likely left utterly flummoxed, comic readers immediately recognized the characters as being part of a community of survivors called the Kingdom. The Kingdom is run by a man named Ezekiel who has a pet tiger (there are no rules in the apocalypse, so why not) and ends up being a huge help to the Alexandrians and the Hilltop community in the war against Negan and his people. It seems fair to assume they're going to be a big part of season seven now that they've made contact.

In the debate of who will live and who will die, Abraham has emerged as a viable possibility. While not a main character on the same level as Michonne or Daryl, he is still a strong presence on the show that's always there to give audiences a laugh with his colorful language. He's also had a lot of character development throughout season six, which can generally act as a kiss of death for the character in question. He had an emotional scene with his good pal Eugene, he's starting a new romance with Sasha, and he would be a big loss to the team not only emotionally but because of his military skills. Plus, he was a goner in the comics. Abraham's toast.

Six months from now some of these theories might end up being laughably wrong, but until then speculation is all we have!