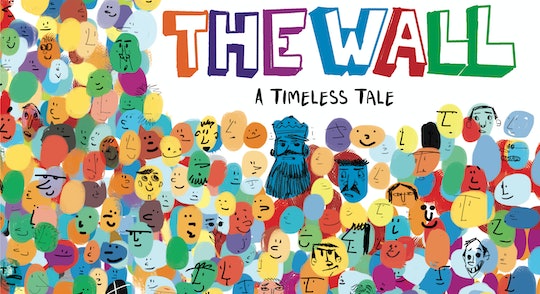 Some things about life are harder to explain to kids than others, as any parent with a child old enough to say the word "why" knows. Questions about why the sky is blue or what makes flowers grow are easy enough to deal with (thanks to Google), but queries like "Why does the president want to build a giant wall?" are a little trickier. That's why you'll be happy to hear that a new book explaining Trump's wall to kids will be hitting the shelves soon — and it should definitely make what might have been a very confusing conversation much easier.

Already a hit in Italy, The Wall: A Timeless Tale (Happy Fox Books, July 2019) tells the story of what happens to a "once-thriving kingdom" when its king "realizes that people in his kingdom look different than him" and consequently "banishes everyone to the other side of a wall," according to a press release. This being a cautionary tale, however, the wall leads to more harm than good: Once vibrantly populated with "singers and sculptors, dancers and astronomers, and everyone in between," the kingdom is left empty... and the king is forced to see that his side of the wall is very lonely. (Spoiler alert: When faced with the consequences of his bad decision, the king in the book develops an appreciation for diversity.)

From Italian authors Giancarlo Macrì and Carolina Zanotti and illustrators Mauro Sacco and Elisa Vallarino, The Wall's fairy tale-esque format and colorful illustrations would be enough to engage the average little one, but I haven't even mentioned the book's most exciting part yet: It actually features a pop-up wall in the spine of the book that appears and disappears as the story unfolds:

As a mother of three (and former child), this strikes me as an absolutely genius idea — pop-up books are generally irresistible to kids, even if they are thinly veiled political parables. (Of course, it can be something of a challenge to make sure younger ones don't rip the pop-up parts out of the book, which most toddlers seem biologically programmed to do, but at least they're interested?)

Of course, it could be that you're wondering why it's even necessary to introduce this topic to your child in the first place. Ignorance is bliss, right? Why not allow them to remain innocent as long as possible? The thing is, your kid might not be as ignorant to this very grown-up situation as you think. Like the saying goes, kids really are "sponges" who soak everything up. You might think they're focused on playing, but some part of them is still absorbing the TV news report in the background about families being separated at the border or the conversation you're having with your partner about Trump's latest tweet. And that part of them really needs your help making sense of what they're hearing.

“Appreciating people who may be different from ourselves is a critical skill for both adults and children,” Fox Chapel Publishing president Alan Giagnocavo said in a press release. “But if we are honest with ourselves, it can also be very difficult to teach, especially in a fun, memorable way. What I really liked about this book is that it focuses on the positive, thriving life and society we miss out on if we get it wrong. The Wall: A Timeless Tale helps to foster these important conversations.”

Turning the saga of Trump's wall into a teachable moment for kids is a pretty lofty goal for a pop-up book, but this one manages to do it. And in just a few months, you can find out for yourself!