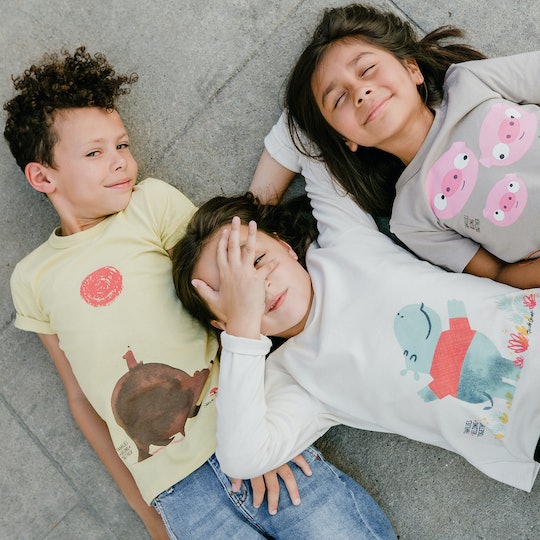 Families Belong Together is a collective of nearly 250 organizations working "to permanently end family separation and detention, seek accountability for the harm that’s been done, and immediately reunite all families who remain torn apart," as per the site's About page. They have teamed up with Winter Water Factory, a Brooklyn-based company specializing in screen-printed textiles and organic kids' clothing, to create four very special T-shirts in response to the crisis on the U.S./Mexico border.

Featuring images from the Coloring Without Borders coloring book, a collaborative collection that includes the work of artists from around the world, and repping the simple but effective tagline of "families belong together," all proceeds from these tees ($36 to $38 apiece) will be donated to Families Belong Together as they continue in their efforts to reunite children to their parents and carers.

According to the American Civil Liberties Union (ACLU), it's estimated that at least 2,654 children have been separated from their parents and carers since the beginning of the Trump administration's zero tolerance immigration policy in 2017. As per a court filing made in the spring of 2019, however, USA Today reported that the government is still in the process of sorting through the cases of "47,000 children who were apprehended by U.S. immigration officials from July 1, 2017 to June 25, 2018."

It could take up to two years to determine just how many of those children have actually been separated from their loved ones — and, unfortunately, this means we could ultimately be looking at a number far greater than 2,654.

For Winter Water Factory, the current border crisis is deeply personal. "Our products are made by immigrants, our master printer who printed the T-shirts is an immigrant, our founder is an immigrant, we wouldn't exist without them," said designer and co-founder Stephanie Lynen in a press release for the capsule.

We strongly believe that families, whatever form they take, have a right to be together.

As the mother of two daughters, who are as yet too young to choose their own clothes, I often find myself trying to pick up pieces that represent my interests and values. Whether because of my toddler's "protect the planet" sweater or my baby's Star Trek-inspired bodysuit, however, I often receive backlash for "imposing" my beliefs onto them, before they have arguably had a chance to form their own.

To this criticism, Lynen tells Romper that "any decision you make as a parent is, in a way, a political statement [...] We chose the designs on our T-shirts because they show a message of love, and promote the idea of family in a diverse and inclusive way. We strongly believe that families, whatever form they take, have a right to be together."

"The only situation that a child should ever be separated from their parents is if it is to protect the child," Lynen says. "A family forced to flee their dangerous circumstances in search of a safer life is in no way an offense that warrants such severe and damaging punishment."

My mother left Medellin, Colombia for many reasons. When she had my older brother in the '80s, however, the country was frequently number-one on most-dangerous-places-in-the-world lists. Ravaged by cartel warfare, Guerilla gangs, and extreme poverty, she didn't feel she was in the best place to raise children. She had seen too much violence, too much death.

Colombia has become a hot tourist destination for northern-Americans and western Europeans these days. In many ways, it's safer than it's ever been. The same cannot be said of many places, in many parts of the world. And, like my mother, there are still countless parents who just want to give their children a shot. Not just a "better" shot at certain jobs or schools or privileges. But a shot at life — at living.

Families Belong Together x WWF long-sleeved tee - Bunnies By Robin Rosenthal
Winter Water Factory
See it here.
More Like This
The Covid Vaccine For Kids Under 5 Has Been Sent To The FDA For Review
WowWee’s New Fairy Finders Will Keep Kids Distracted For Hours
30 Easy Summer Activities For Kids That Work Rain Or Shine
15 Fun & Historical 4th Of July Facts To Share With Your Kids