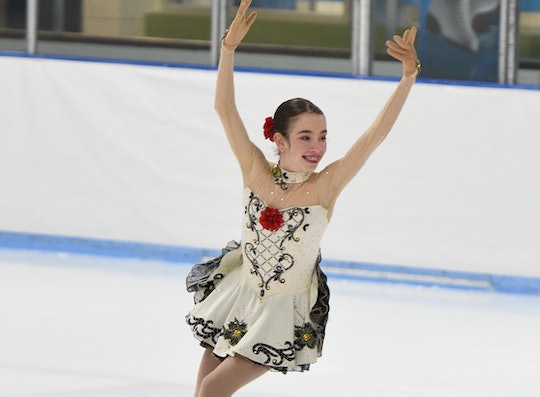 Courtesy of Ava and Liz Raiter

Each day, Sydney Flaum wakes up at 5 o’clock in the morning for her 6:30 a.m. figure skating session. Afterwards, she has school from 7:45 a.m. to 1:50 p.m. “Then I skate the 2:10 session,” she tells Romper. “Then I do the 3 o’clock pairs session, and sometimes I skate the 3:50.” Add to that two ballet classes and two off-ice strength sessions per week, and you’re looking at a pretty grueling schedule for a 12-year-old. Such as it is for the youngest aspiring Olympians.

Only Flaum, who hopes to compete in the 2022 Winter Olympics in Beijing, doesn’t find her schedule grueling. She doesn’t have to work so hard, she explains. She does it because she loves being on the ice. And all the hard work is worth it when she’s standing on the podium, as she did just last year, when she won the Juvenile Pairs national title at the National Championship in U.S. Figure Skating.

Flaum started figure skating at 6-and-a-half years old. When she got on the ice, she says, something just “clicked.” She’d spend so many hours skating that her mother, Dr. Agnes Flaum, used to joke the Zamboni would eat her.

Besides the skating itself — with its dizzying jumps and graceful turns —Sydney loves the sense of community she's found, and how older figure skaters always help the younger ones. At the Broadmoor World Arena, where she trains in Colorado Springs, Colorado, she certainly has plenty of Olympians to look up to.

Recently, Sydney attended the wedding of Alexa and Chris Knierim, pairs skaters who this week helped the U.S. win Olympic bronze. Sydney especially looks up to Alexa, who’s “sassy when she skates,” and once helped set the gems on one of Sydney's costumes.

I ask Sydney if she ever gets stressed competing in front of big crowds. “I don’t normally get nervous or stressed out,” she says. “When it’s a big competition, I try to focus on what I’m going to do. Instead of focusing on the nerves, or whether I will fall, I focus on my triple loop.”

As it turns out, even at a young age Sydney is practicing the mental skills that separate great athletes from simply good ones. Dr. James Millhouse, Ph.D, author of The Parents Manual Of Sports Psychology, explains in an interview with Romper that in high-pressure situations, it seems reasonable to think, “Don’t be nervous.” And yet, that’s exactly the wrong thing to have on your mind. “Good athletic flow comes from the non-dominant hemisphere, which for most people is the right brain,” he says. “And the right brain doesn’t hear don’t. All it hears is nervous.”

Dreaming of raising an Olympic athlete yourself? Agnes Flaum offers this advice: 'Definitely make sure not to push your kids too hard.'

Twelve-year-old Ava Raiter, who also plans to go the Olympics one day, first hit the ice at just 2-and-a-half years old. "My mom was a skater herself, so they thought it would be fun to take me open skating," she tells Romper. That first day, she wore her cousin's hand-me-down skates. Last year, she qualified for the first time for the National Championships, putting her among the top 12 athletes in her age group.

Raiter's favorite part of figure skating? The jumps. "I even like it more than doing spins," she says. "I'm working on my triples." She shares a coach with Olympian Vincent Zhou and Mirai Nagasu, who just became the first woman to land a triple axel at the Games.

"It takes a lot of practice and repetition," she says of difficult jumps. "It depends on if you can do the technique quickly, but once you have it, you can really do any jump."

Raiter trains hard — three or four hours each day — and sometimes, she says, it gets exhausting. "Sometimes I get a little tired, just because of all the work. I say I can push through it, and I can keep going."

Of the intense schedules, and the fight-through-it attitude, Millhouse observes that it’s like the old saying — being honorable is doing the right thing when no one is looking. “It’s the same thing for athletes when they work out. When nobody else is around, they’re just pushing, wanting it a little bit more, and working long hours to be better," he says.

Dreaming of raising an Olympic athlete yourself? Agnes Flaum offers this advice: “Definitely make sure not to push your kids too hard.”

And Dr. Millhouse backs her up there, too. “It’s critical for parents to not make the sport unpleasant or into drudgery. Because parents can start pushing, and it’s kind of a rule that the more a parent pushes, the less kids will do on their own.”

“We live in a society where everybody wants things now, but it took Sydney nine months to learn the double axel,” Agnes says proudly. “That’s a long time for a 10-year-old, you know? Afterwards, we talked about what she’d learned … That when you want something, you go under, over, between. And whatever you want, when you work hard, you can find a way to achieve it.”