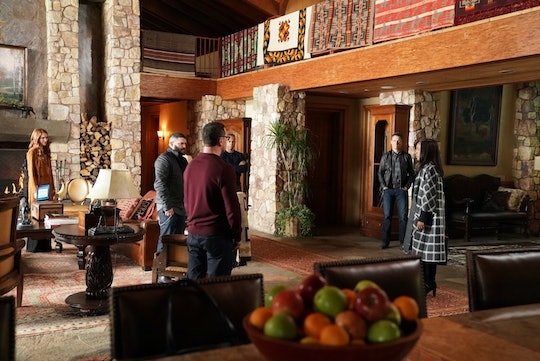 Despite there being six episodes left of the season, the sad truth of the matter is that slowly but surely, Scandal is coming to an end. Soon, there will be no more epic walks down the White House hallway and it will be the end of Rowan’s passionate monologues. But until that time officially comes, there are plenty of theories of how Scandal will end to get you prepared for almost any scenario.

If this was any other season, there would almost be a guarantee of certain characters making it to the end and beyond, but since Season 7 is the show’s final season overall, anything goes. And with Olivia more far gone than ever in her power trip and total personality change, I’d say that it’s even more feasible that we’re in any anything goes type of scenario with Scandal. Red alert, people — this is the darkest timeline and we’re all in the thick of it. So at this point, Scandal could end with more deaths than anyone can handle, including Olivia’s. Then again, there could be a happy ending all around, but since this is Scandal and Shonda Rhimes loves a good tragedy, I wouldn't bet on Olivia and QPA riding off into the sunset together.

Without further delay, though, these are some of the more solid theories of how Scandal will end and as it stands, one or more could legitimately end up being true.

While the Jake/Olivia/Fitz love triangle hasn't had much steam as of late, she has found herself drawn to both men in some capacity during this final season. Instead of hoping that she returns from the dark side, Redditor CVC422 posted that in the end, Olivia may simply choose to be alone in her power and allow herself to be turned over to the dark side completely. It would call back to the two big romances of Olivia’s life on Scandal and also have her being the official Command, in place of Rowan with no hope of turning back.

At the time of Quinn’s would-be death, Olivia was going to be the godmother of her unborn child and had helped prepare her in preparing her wedding day. She’d even handed over the keys to OPA to Quinn, entrusting her with the business she’d built up for the past several years. So to be partly responsible for Rowan almost killing a pregnant Quinn means that Olivia basically put a nail in the coffin of their friendship. And even Katie Lowes (Quinn) doesn't know if they’ll be friends again by the time Scandal ends.

"I don’t know if Quinn and Olivia ever come back from this," she told Entertainment Weekly. "Personally, I just don’t really think it’s possible. Of course, anything is possible in Shondaland, but come on, Olivia Pope was not a very good friend."

Quinn Gets Her Own Happy Ending

Lowes also told Entertainment Weekly that being an optimist, she has high hopes for the way Quinn’s story in particular ends, come the series finale of Scandal. A happy ending for Quinn might look like QPA succeeding in full force while Quinn and Charlie raise their baby together and head the business like total bosses. But, Lowes, added, Rhimes is "a great protector of story and I don’t know if she believes in or wants happy endings for these characters." So maybe a happy ending for some and a hole in the ground for others?

Olivia Will Be The New President

Mellie might be the POTUS right now and a new one at that, but if Olivia uses the power she has left to make it to the end of the series, then maybe she’ll find herself running B613 and also somehow in the Oval Office herself. "It's the ultimate power position, and that's what she wants," ChaosAndMath wrote on Reddit earlier in the season.

Before recent events came to light, I wouldn't think Huck could turn on Olivia so much that he’d actually torture and kill her for her crimes against one of their own. But since she’s proven herself to be beyond repair and unable to come back from the brink of the black hat-wearing Washington power player she’s become, that might be where things are headed. When everyone got together for Olivia’s intervention on Scandal, Huck proved that he no longer trusts or believes her and that could mean that he’d be the one to torture and kill her in the end in retribution for her deceit, even with Quinn still being alive.

B613 Will Be Dismantled For Good

Fans could see the end of B613 and really, that goes for all of the corruption we’ve witnessed in Scandal’s version of Washington. In the end, B613 could be officially dismantled, as Mellie already threatened Jake that she would do herself, and the corruption could see an end, or at least start to, with a new beginning of sorts of on the horizon as the show ends. I don't know how realistic that might be with a show whose very title speaks to what it’s been about all along, but it could happen, right?

While there’s still a handful of episodes left to figure out where the show is going and how Scandal will end, chances are, it's going to be a mixture of happiness, contentment, and tragedy all around, because I honestly can't see Rhimes giving everyone the perfect ending in a show full of twists and shocking revelations. In a press release obtained by The Hollywood Reporter long before Season 7 premiere, Rhimes said that for the final season, the plan was always to leave "nothing on the table" and "handle the end the way we like to handle the important things in our Scandal family: all together, white hats on, Gladiators running full speed over a cliff."

So regardless of who lives or who dies, the Scandal series finale will likely be as satisfying of an end as possible.