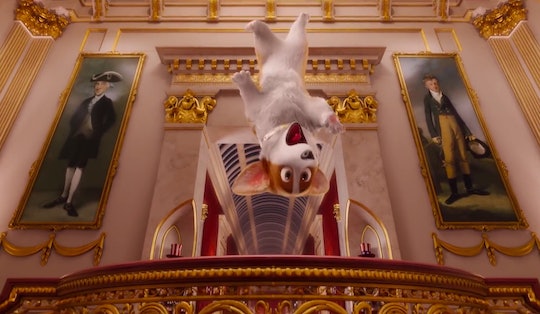 "In 2019, you're cordially invited to meet the biggest rascal of the royal family," a voice says in the opening moments of the trailer for The Queen's Corgi, an upcoming animated movie. OK, I always thought the royal family's biggest rascal was Prince Harry. But apparently, that title belongs to a cheeky corgi named Rex. (Prince Harry already has the title of Duke of Sussex, after all.) The Queen's Corgi trailer is so adorable — here's everything it reveals about the new movie.

Even if you're not a royal family buff, you've probably seen photos of Queen Elizabeth II loving on her corgis at some point during her 66-year reign as the United Kingdom's monarch. So, it's about time that they become immortalized on film. This week, the trailer for The Queen's Corgi dropped online. Based on the one-minute clip, the movie tells the story of Rex, the newest corgi to arrive at Buckingham Palace. The Queen is clearly infatuated by Rex — she even lets him sleep in bed with her and Prince Philip, Duke of Edinburgh.

But to the dismay of the other corgis (and a curmudgeonly butler, who is totally the Jerry Gergich of this film) — Rex runs the show at Buckingham Palace. Not only does the queen let Rex get away with whatever he wants, but the naughty puppy continually gets into mischief around the palace — he purposely pees on the butler's shoe, he knocks over a suit of armor, and he poops on the carpet.

However, life's not all fun and games for Rex. Later in the movie, he gets lost, and winds up meeting a group of rough-and-tumble dogs at a doggie fight club, according to Variety. Afterwards, he goes on an expedition to return to his palatial home and the queen, and he learns a few major life lessons along the way. The movie has been acquired by Lionsgate, and even though it's being made in the United Kingdom, it has already been sold to play in a slew of other countries, with discussions over U.S. rights still in the works, Variety reported.

So while The Queen's Corgi is clearly based on the queen's lifelong love of corgis, how much of the film's events are actually based in reality? Did the queen really have a corgi named Rex?

Even though the queen has had many corgis, she has never had one named Rex. (That's probably a good thing in the eyes of her staff, considering how much trouble the fictional Rex gets into in The Queen's Corgi!) The queen got her first corgi — rather, first two corgis — when she was just 7 years old and went by Princess Elizabeth. She and her sister Princess Margaret were gifted a pair of corgis named Dookie and Jane in 1933, according to The Telegraph. There is even a photo of a 10-year-old Elizabeth cuddling with a pup, proving that her love of the breed really did go all the way back to her childhood.

Then, on her 18th birthday in 1944, the queen was gifted a corgi named Susan. In true monarch fashion, the queen bred Susan to continue the royal corgi line, and that line stayed strong until April of this year, when her final royal corgi, Willow, passed way, The Daily Mail reported. Susan's bloodline produced at least 30 Pembroke Welsh corgis, according to The New York Times. The queen still has two dogs named Vulcan and Candy, though they are "dorgis," a crossbreed that resulted when one of her corgis got together with one of Princess Margaret's daschunds, The New York Times added.

Between those 30-plus corgis, I'm sure that at least one of them got up to Rex-style shenanigans at some point over the past eight decades. Luckily for the queen, she's probably never the one who has to pick doggie poop up off the carpet. The Queen's Corgi will hit theaters sometime in 2019.