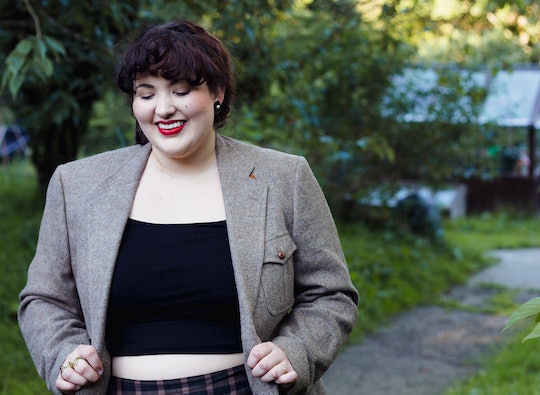 Recently, one of my relatives told me something that stuck with me: "Everyone gains weight during pregnancy. You don't have to keep it, though." My daughter had just turned a month old, and the family member in question was referring to the 50 or so pounds I had put on since I'd learned I was pregnant. She stared at my belly — softer, jigglier, more protruding — with a mixture of pity and discomfort. The implications of her comment were clear: Why hadn't I enrolled in a gym yet? Why wasn't I restricting myself to kale smoothies and whole grain avocado toast? Didn't I want my old figure back?

To be honest, though, losing the baby weight hadn't really crossed my mind. In those first four weeks, all I could think about was ensuring that my daughter was being fed and changed, while contemplating whether I would actually die from sleep deprivation. At times, I stared at my new stretch marks and thicker thighs, as one might stare at a new piece of wall art they're trying to decipher. I didn't exactly dislike them, and I didn't think to do anything about them. I just thought my body had changed the way it was supposed to.

My hips were wider, which meant I would be ready to give birth again should I ever forget how damn difficult that whole ordeal was. Stretch marks had appeared as a sign that life had grown inside my body. My boobs were already saggier; a product of breastfeeding, and they'd probably keep getting saggier.

Women are taught that their bodies are the most important things about them. I was a plus size woman who had gotten even fatter, and my relative felt sorry for me for this reason. Her pity is precisely why I'm opting out of post-baby weight loss, and why this decision feels like an act of resistance in our culture.

"Resistance" is a term that's been thrown around a lot following Trump's election. To resist is to refuse to comply with something that is generally accepted as "normal," but that is harmful nonetheless. Cultural ideas about postpartum weight loss and dieting are all normal, but they are also all harmful. They establish one body type as the best, and all other bodies as failures or works in progress. The result is that a lot of us feel like sh*t for not being thin enough, pretty enough, chiseled enough. We feel like we aren't entitled to live fully and freely until we adjust ourselves; until our bodies adhere to other people's expectations.

My body was fat before I had a baby, and it became even fatter thereafter. But I have never considered my body a problem to be solved. We each come with unique genetics, and our bodies are similarly unique. Our culture makes us feel as though these natural variations are sources of shame, not pride — and that is the real problem to be solved.

We sometimes give mothers a "pass" when they are pregnant. We tell them not to worry if they ever express concerns about their changing bodies. "You'll get back into 'shape,'" someone might muse, as though the mother's present body was somehow shapeless. Or: "You'll lose all the weight. Just be patient." What we should perhaps be saying instead is simply that it's OK. It's OK to grow. It's OK to widen. It's OK to take up space.

To opt out of post-baby weight loss is to opt out of any narrative that suggests that not losing the weight means that you are a failure.

As women, we're conditioned to not take up any space. We're conditioned to stay silent, meek, submissive, and small. This impulse manifests itself in various ways: when we don't speak up in the boardroom, or when we don't ask for a promotion at work. When we hug our bodies tightly on the subway so as to make space for our fellow passengers, or when we go on low-calorie meal plans and restrict our eating habits and buy into that "nothing tastes as good as skinny feels" propaganda.

After we have children, it's sometimes difficult for our bodies to revert to their former selves. For some folks, no amount of exercising or dieting will ever shrink their hips or eradicate the skin that now hangs from their bellies. When this happens, it's all too easy to feel like a failure.

We aren't failing, though. Our postpartum bodies are a sign of nothing but our achievement. Going through childbirth doesn't make you a lost cause; it makes you a goddamn hero. Your post-baby body is a sign of life, love, and your own general badassery. To opt out of post-baby weight loss is to opt out of any narrative that suggests that not losing the weight makes you subhuman. It's to resist the norms that hurt far too many of us, far too often. It's a way to resist the patriarchy, and don't let anyone tell you differently.