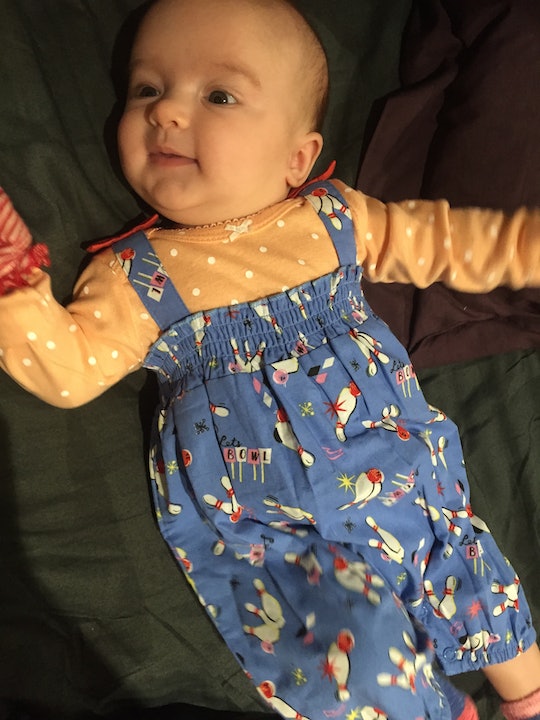 Why I'm Teaching My Daughter To #Resist

Oftentimes when I look at my 3-month-old daughter, my heart simultaneously swells with joy and fear. I am mesmerized by this beautiful innocent: a tiny person who isn't yet acquainted with the realities of anger or hatred or cruelty. But I know that it's only a matter of time before she grows older; before she's presented with the kind of inequality and prejudice most women and femmes the world over undoubtedly face. During Women's History Month, I am especially reminded of the importance of teaching my daughter resistance, lessons I hope will affect not only her relationship to herself, but the ways in which she treats and fights for other women and marginalized groups.

Dictionaries would define resistance as the "refusal to accept or comply with something." It is a highly politicized term, one regularly used as a name for anti-establishment principals, whenever the "establishment" is greatly failing minority communities (as it so often does). It is a term that comes to my mind when I contemplate how women still do not possess full autonomy over their bodies; or when I recall that we continue to make 79 cents to a man's dollar. And that things are all the worse for women of color, trans women, indigenous women, and mothers.

According to the Women's History Month (WHM) website, WHM is meant to be a time to commemorate and encourage "the study, observance, and celebration of the vital role of women in American history." I fully plan to introduce my daughter, Luna, to the works of great American women. I hope she'll read I Know Why The Caged Bird Sings by Maya Angelou, so that she may be mindful of the intersection of girlhood with race; so that she may be cautious of the ways that simply being born a woman puts her at increased risk of trauma and sexual violence. She will also know Ruth Bader Ginsburg's name: a woman who has long supported pro-choice legislation.

No matter how many powerful women I put on her radar, however, I need her to know that the fight is not over. Not even close.

But I also hope to introduce her to women who've greatly impacted this world far beyond American soil. The United States is not the nucleus of Earth, after all, and I want her to know that as well. I will buy her Rigoberta Menchú's autobiography so that she may learn about the navigation of feminism and indigenousness directly from a fearless voice in indigenous women's rights. I will show her the paintings of Frida Kahlo, who made political statements with her artwork, queerness, disabilities, and unibrow alike. I will hope that Janet Mock's autobiography teaches her a little something about the importance of ensuring one's feminism is intersectional, of carving out much-needed space for transgender women in our actions, speech, and overall politics. All of these humans are individuals who should help teach Luna to listen and fight accordingly.

No matter how many powerful women I put on her radar, however, I need her to know that the fight is not over. Not even close.

My daughter was born in 2016, the same year that Brock Turner was released from prison after serving three months of a six-month sentence because a judge felt that any more time "would have a severe impact on him." Nevermind the severe impact his sexual assault had on his victim, who also had to face a lengthy and highly-publicized trial filled with folks who largely tried to deny or belittle what had happened to her. My daughter was born the same year that the first black president of the United States learned his role would be handed over to a president endorsed by the Ku Klux Klan.

She was only 1 month old when we learned that that same president was appointing a known white nationalist CEO as his chief strategist, a role rooted in providing counsel to the president on all critical matters. A man with a penchant for comparing the work of Planned Parenthood to the Holocaust via a far-right website. She was also born the same year that it became painfully clear that women are still not meant to have sex for reasons other than reproduction. At least, not if they don't want to face the consequences. At the same time, however, she was born in an era when women are expected to be conventionally beautiful (if not sexy) above being intelligent or compassionate or brave.

A child who will never know a life without the internet, Luna arguably has more inclusive, progressive, radical work and art and words at her disposal than any generation before her.

She was born at a time when legislation around the world allowing or pardoning the beating, rape, and abduction of women — not to mention their murder on the grounds of adultery — still exists. She was born at a time when approximately "72 percent of victims of anti-LGBT homicide were transgender women [and] 67 percent of anti-LGBT homicide victims were trans women of color" in America alone, according to a 2013 National Coalition of Anti-Violence Programs (NCAVP) report.

But she was also born the year that "feminism" became a buzzword. She was born the same year that transgender rights were questioned and challenged as they so often are, but also fought for deeply and visibly. She was born during the rise of Fourth Wave Feminism, a contemporary incarnation of the movement that celebrates queerness, sex positivity, trans visibility, respect for bodies of all sizes, and digital connectivity and representation. A child who will never know a life without the internet, Luna arguably has more inclusive, progressive, radical work and art and words at her disposal than any generation before her.

As she grows older, I want her to use that technology to better resist. Whether that be by reading and learning about the activism of others, creating her own via a blog or social media accounts, finding the phone numbers of her local representatives, discovering how to utilize fashion to turn stereotypes of femininity and beauty upside down, or simply connecting to voices who can teach her more about equality and representation, I want her to know that she's lucky to live in a time when the internet can help facilitate all of the above.

A key ingredient to achieving this all will, of course, be other women: Learning from the women who came before her, learning from the women who are still around, listening to the voices of women different to herself, and knowing that it is because of women that she has the right to stand up for herself and others — to resist — in the first place.

More Like This
Paris Hilton Is Officially A First-Time Mom
When Does A Baby Recognize Their Father? A Pediatrician Explains
Does The FDA's Plan To Limit Lead In Baby Food Go Far Enough?
Barbie Honors Aviator “Queen” Bessie Coleman In Their Inspiring Women Line
What Parents Are Talking About — Delivered Straight To Your Inbox