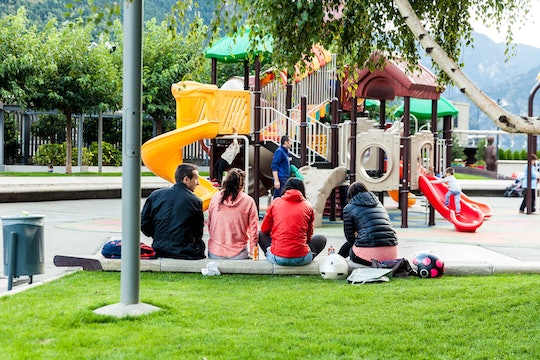 These Are The Most Expensive Places For Child Care

According to Care.com's Cost of Care Survey, child care is one of the biggest expenses a family faces. And if you live in one of the most expensive places in the nation for child care, your family might be paying a whole lot more than someone else across the country. The Care.com study, which was done in partnership with New America, found that the states that are the least affordable in terms of hiring a nanny are Mississippi, New Mexico, Arkansas, West Virginia, and Alabama. When it comes to day care centers, the most expensive places are Washington D.C., Oregon, California, Alaska, and New York.

On the other hand, if you want a nanny in New Hampshire, New Jersey, Maryland, Connecticut, and North Dakota, you are in luck. There are many deals to be had there. For day care, the cheapest states are North Dakota, Utah, Delaware, Arkansas, and New Jersey.

Over 40 percent of parents surveyed said that the cost of care for their kids has caused tension in their relationship with a co-parent. In addition to that, 20 percent of families have had less children just because the costs of day care and nannies were so high. Others were more likely to put themselves in debt for child care — one in three parents, to be exact. And that's up 25 percent from 2016's study.

Even worse, it's hard to keep up with costs. Although 75 percent of families are budgeting for their child care costs, only 30 percent are able to stay within that budget when it comes to the end of the month.

It's sort of a vicious cycle, when you think about it. Parents can't stay within their child care budgets, but they're also making sacrifices at work because of it. Two out of three parents have made a career decision based on child care costs; Many of them have had to take jobs with more flexible schedules, went down to part-time, or stepped out of the workforce altogether. That means less hourly wages to bring home or depending on one income in the name of being able to find a babysitter.

According to the survey, 85 percent of working parents wish their employer offered child care benefits and 68 percent said that the current Dependent Care FSA tax credit isn't really helping them out.

Basically, they need more help. President Trump and Ivanka Trump's original proposed Paid Family Leave Plan (which wouldn't even be available to same-sex couples) and Child Care Tax Plan would end up only giving average families about $20 a year for child care costs. A revised version helps lower income families out a little bit, but it also deregulates day care. So it's sort of a toss up.

If anything, the data shows that companies and, possibly the government, could be doing a lot more to help American families pay for child care. Making sure kids are safe and happy, and that families are earning the most that they can, is worth it.