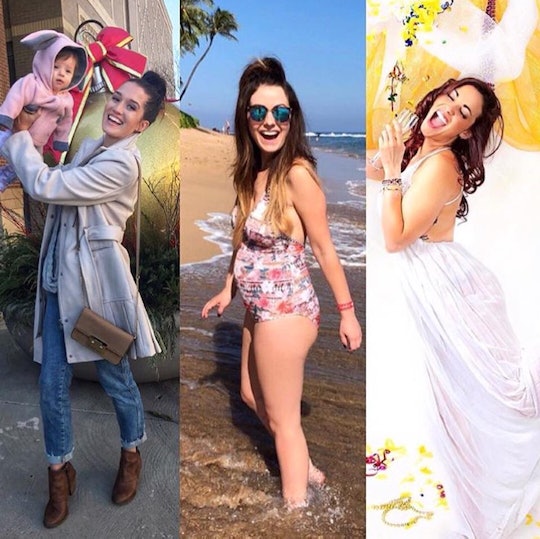 Get Excited, Because These 'Bachelor' Stars Are Starting A Podcast For Just For Moms

Normally, a post-Bachelor life entails selling herbal tea and accessories on Instagram and showing up to random reunions and appearances. But three Bachelor stars are starting a podcasts for moms and using their fame for a good cause: Share their parenting insights and advice by getting "real" about all things motherhood. The podcast is called Babes & Babies, hosted by Bachelor Nation's Jade Roper, Carly Waddell, and Elizabeth Sandoz.

Roper and Waddell, as you might know, are both new moms (or an almost new mom in Waddell's case) and Sandoz is a doula, so they really know what they're talking about. On iTunes, they describe their podcast as a "safe space without judgment" and an "honest and hysterical take on all things women and babies." The first episode is already available for download and more are on the way.

Already, fans are loving it. On iTunes, one subscriber wrote, "This podcast is a breath of fresh air. Listening to open and honest women talking about real life issues. Carly, Jade and Liz are great ladies. Super funny too. It's definitely worth a listen!"

Another added, "These women did a great job being honest and open about being Moms/becoming a mom. Loved the podcast," so if you're a podcast fan, a young mom, or a Bachelor devotee, it might be worth a listen.

Even if you're not a Bachelor fan, it sounds like a great show. One kind of adorable thing about the Bachelor stars is that so many of them have stayed in touch over the years and hang out. If you follow each one of them on social media, you know that they spend quality time with each other and other former contestants, despite the season.

Although, Roper and Sandoz go way, way back. Just in case you have trouble keeping track of all of these people, let me remind you that Sandoz was the woman from Nick Viall's season who had hooked up with him before. At Roper's wedding! See? I told you the Bachelor-verse is all sorts of enmeshed.

Roper, who now uses Tolbert as her last name, just welcomed a baby. She and her husband Tanner welcomed their baby girl, Emerson, in October, though she came early. According to E! News, it was pretty scary since she was planning on giving birth at a birth center, but she had to be at least 37 weeks to do that. She was 34 weeks when she went into labor. Roper added, according to E! News, that she doesn't regret her decision to give birth without any drugs:

I will never forget the feeling of the baby's head come into the birth canal. It is the most intense pressure but it's the coolest feeling. I was someone who definitely had a lot of pain… I was probably scaring the people down the hallway because I was screaming.

Although she didn't use an epidural and Sandoz is a doula, the podcast is advertised as judgement-free, so you should still tune in if you're a fan of all the pain meds during labor.

Waddell and her husband Evan Bass are expecting their newborn to arrive any minute now. Her due date is Feb. 16, according to an Instagram post she shared in October, so it's almost time. The couple has been very open about all their baby news, including revealing the sex late last year. She wrote on Instagram:

Evan and I are SO EXCITED to reveal our little angels name on the sweetest new born blanket from @shophighway3! Her full name will be Isabella (Bella for short) Evelyn Bass, and we love her so much already! Can’t believe in about one month we will be wrapping her up in this soft, cuddly little number!

With two newborns, an experienced doula, and a lot of friendship involved with the show, the podcast is definitely going to be a hit. Just hope that they recorded a few episodes in advance, since Waddell is going to be just a *little* busy for the next few weeks.