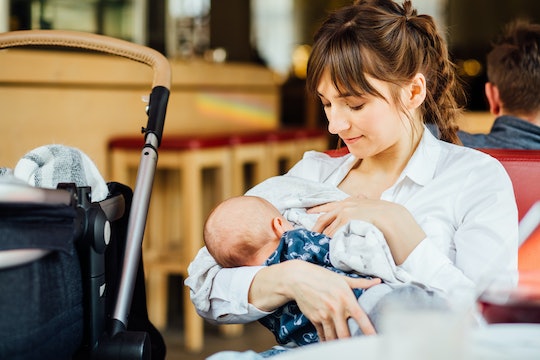 Breastfeeding is hard — that's a fact most new mothers know, but that can too often become obscured by the narrative that breastfeeding should be a beautiful bonding experience. It's especially hard for single mothers or mothers who are the first in their families to breastfeed. As if uncertainty of milk supply wasn’t challenging enough, many mothers must fight through the stigma of breastfeeding when in public or in front of others. This alone could sway a mother to perhaps give up on nursing, not realizing the amazing health and nutritional benefits that it gives her child. Thankfully, a new, nationwide breastfeeding "cafe" program is changing that and providing mothers with the support, help, and resources they need to make breastfeeding significantly less stressful.

In early August, a brand new Baby Café, as they're called, opened in Schenectady, New York. The cafes — which have been popping up all over the United States after receiving extremely positive feedback in the United Kingdom — encourage breastfeeding and provide new, experienced, and expecting mothers with expert lactation support. Since the first Baby Café model was introduced in the U.S. in 2006 though Baby Café USA, there are now more than 80 cafes open all over the country. According to the Baby Café website, cafes have opened in 21 states. With the inclusion of the new Schenectady cafe, New York now has Baby Cafés in 17 cities.

“I just felt that there was a really strong need for mothers to be educated on the benefits of breastfeeding,” says Sarah Tice, an International Board Certified Lactation Counselor who is leading the initiative in Schenectady, in an interview with Romper. “I want to make sure each mother is able to meet her breastfeeding goals, whatever that goal looks like for her, whether it be for two days, two months or two years.”

Tice has been a breastfeeding advocate since the mid 2000s after working as a nurse for some years. In 2011, upon the birth of her first child, the breastfeeding support she received motivated her to find a way to offer that same support to mothers who were less fortunate.

“After I became a mother in 2011, and had a really good experience with an ICBLC (International Board Certified Lactation Counselor) at the hospital I delivered at, I felt very strongly that this is my passion and wanted to help every mother that I met meet her personal breastfeeding goal.”

The Baby Café in Schenectady, along with others throughout New York, is funded by a $191,000 state grant through St. Peter’s Health Partners. The grant is intended to cover the costs of the cafes over the next five years with more opening both upstate and near New York City.

The model is focused on education and comfortability, Tice says:

The Baby Café is located in a library, so it’s a private space off of the main library. We do have some privacy screens just if [the mothers] feel more comfortable. Moms are open to breastfeed in the public area with other mothers, get that mother to mother support and talk about different things that are occurring in her life. It’s a very informal setting. We have refreshments there, we have coffee and teas, we have snacks for the kids and juice boxes.

Mothers who frequently visit the Baby Café are also provided with ways to track their child’s growth and ensure that he or she is receiving an adequate supply of nutrients. “We also have a scale there, so we weigh the babies every visit just because we want to monitor positive weight gain. Any type of question she may have, if I don’t have the material right at the Baby Café, I can definitely get back to her and make sure that she gets the needed resources.”

The Schenectady cafe is located within the Phyllis Bornt Branch Library and Literacy Center. While some may not see the need of a Baby Café in Schenectady, specifically — or any of the other smaller Baby Café locations, like Kenosha, Wisconsin, or Decatur, Georgia — Tice explains how Schenectady is the perfect location.

“Our rates for breastfeeding are pretty poor in Schenectady County. The reason why we targeted the 12308 ZIP code is because it’s a lower socio-economic area, and the rate of breastfeeding there tends to be lower than other surrounding communities.” Since its grand opening on Aug. 2, the Baby Café in Schenectady has been helping and preparing mothers, both new and expecting, for the different struggles that accompany breastfeeding. One of the most common concerns, Tice explains, is low milk supply.

“The reason why is most times, they don’t have a low milk supply, but they just aren’t sure if the baby is getting enough. Unlike when you’re bottle feeding and you can see how many ounces the baby is consuming, with breastfeeding, you’re basically nursing until the baby is satisfied.”

Because a newborn’s stomach is so small, it does not have the capacity to hold large quantities of milk. This may cause the newborn to feed more often as breastmilk is digested through the body faster than formula. Tice advises that mothers feed 10 to 12 times per day, which may change as the baby has growth spurts or other reasons that can cause increased hunger.

The best part of the Baby Cafés: they’re entirely free of charge.

“Normally, if she wanted to see an ICBLC after she had a baby, she would have to pay out of pocket and be reimbursed by her insurance. So this is a free service for any mother. It doesn’t matter where she delivered or where she lives, she can come in,” Tice says.

Following the Schenectady location, another cafe was opened in Troy, New York, with more planned for the future. While the grant will only fund the Baby Cafés for the next few years, Tice is aiming at making this a sustainable project in New York.

“We want to continue making sure that the Baby Café is able to remain open. Obviously we would love to have more mothers come and would love to expand our hours because we have so many mothers coming, but we know that just having one mother there is a win.”

To locate a Baby Café near you, visit this website.